Hugh brought his French and Indian War collection down to the club and I got in my first game of Muskets and Tomahawks. From the makers of SAGA, M&T is a skirmish game representing the small wars fought in North America during the late 18th Century.  There have been a number of excellent reviews of M&T so I won't revisit the game mechanics.  Anatoli's Game Room posted up a superb review here if you'd like to read about them in detail. 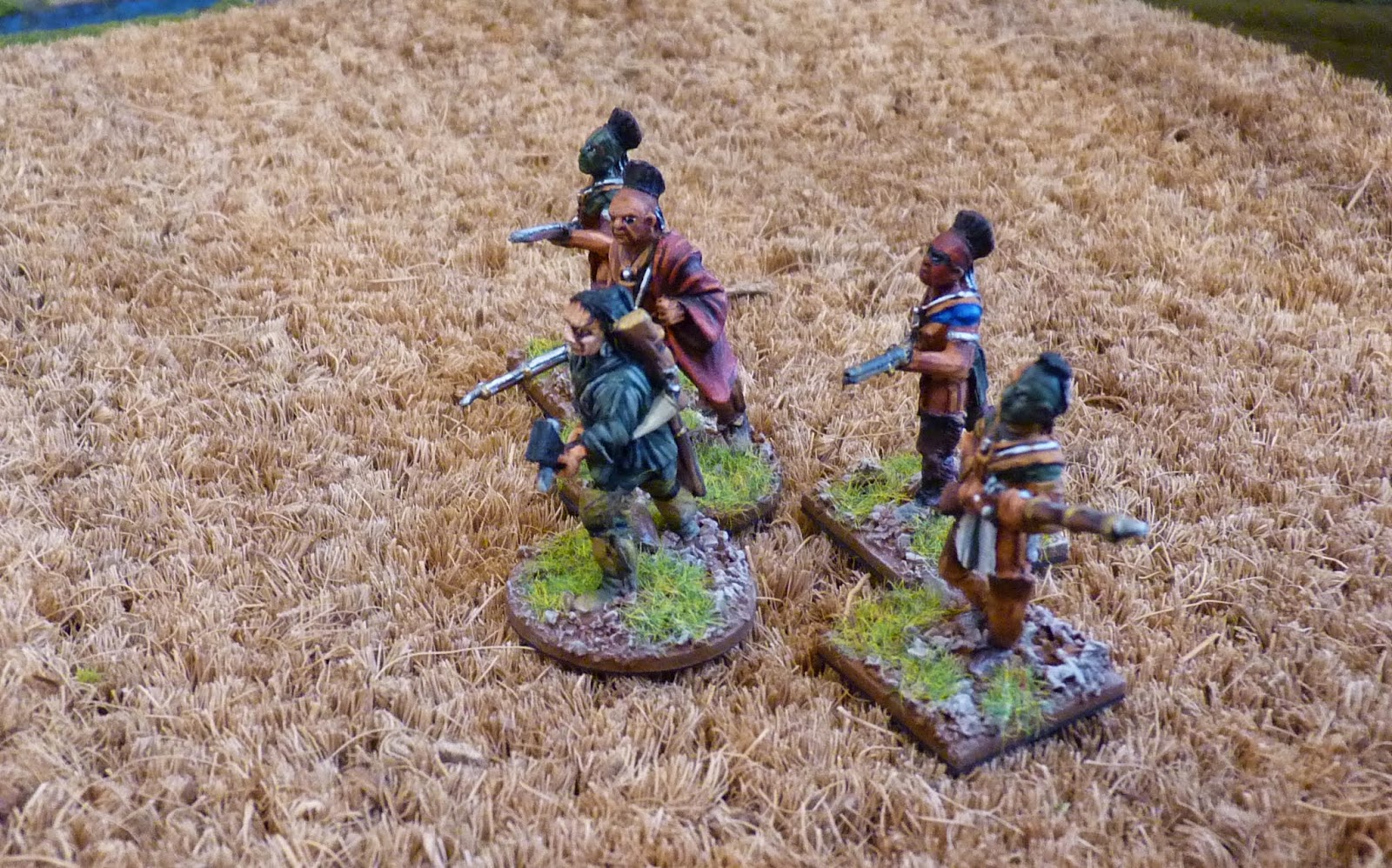 Hugh gave me a 20 minute rules review and we dived right in.  As the French & Indian player, I rolled up "Slaughter" in the scenario generator and Hugh got "Protect" as the British. He placed 2 units of civilians in cabins and his British light infantry in a firing line. The British had an Indian warband and Rangers off board.  At the beginning of each turn, he had to roll to activate them. Turn 1, he managed to activate his Rangers and it was a race to the cabins! 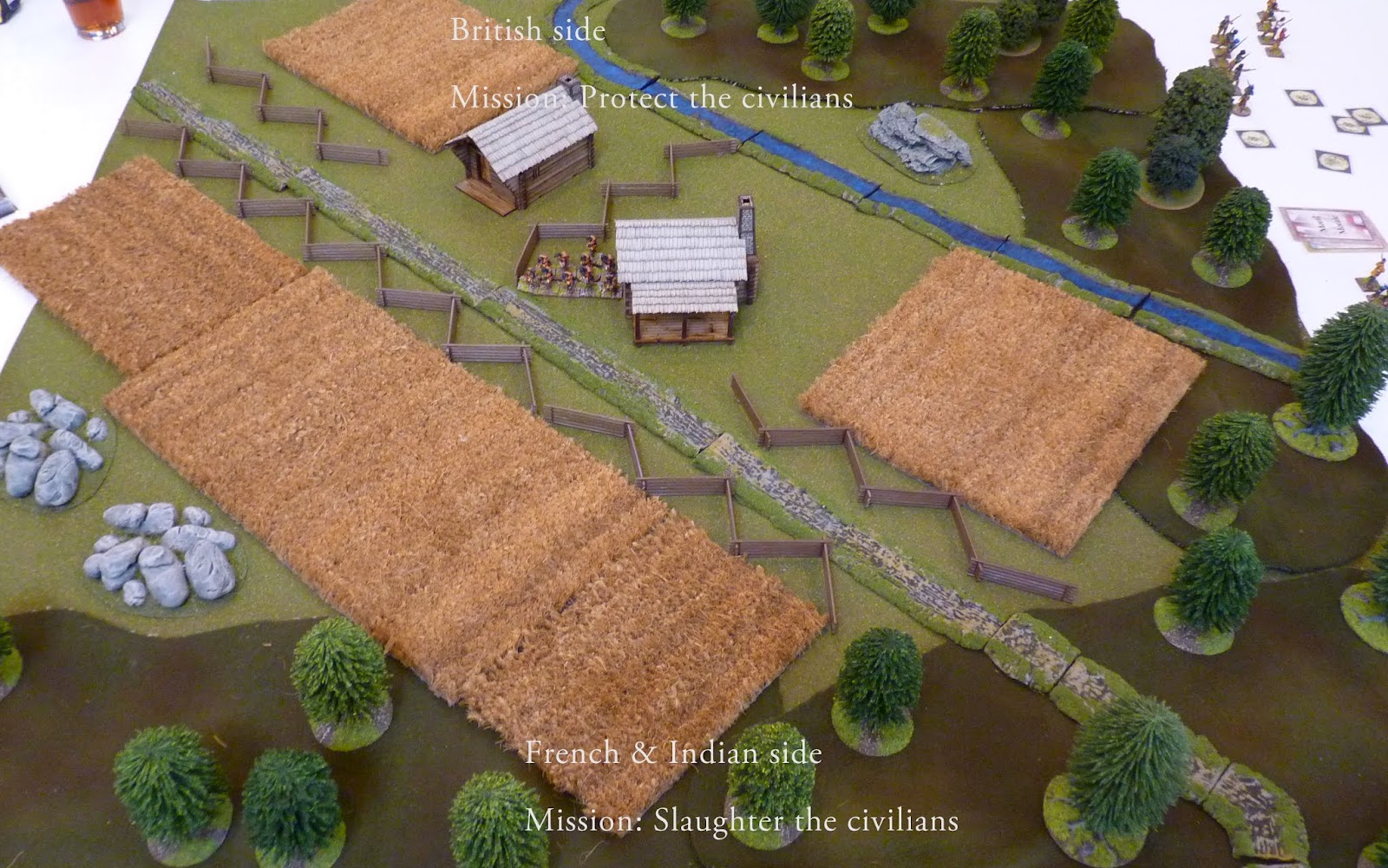 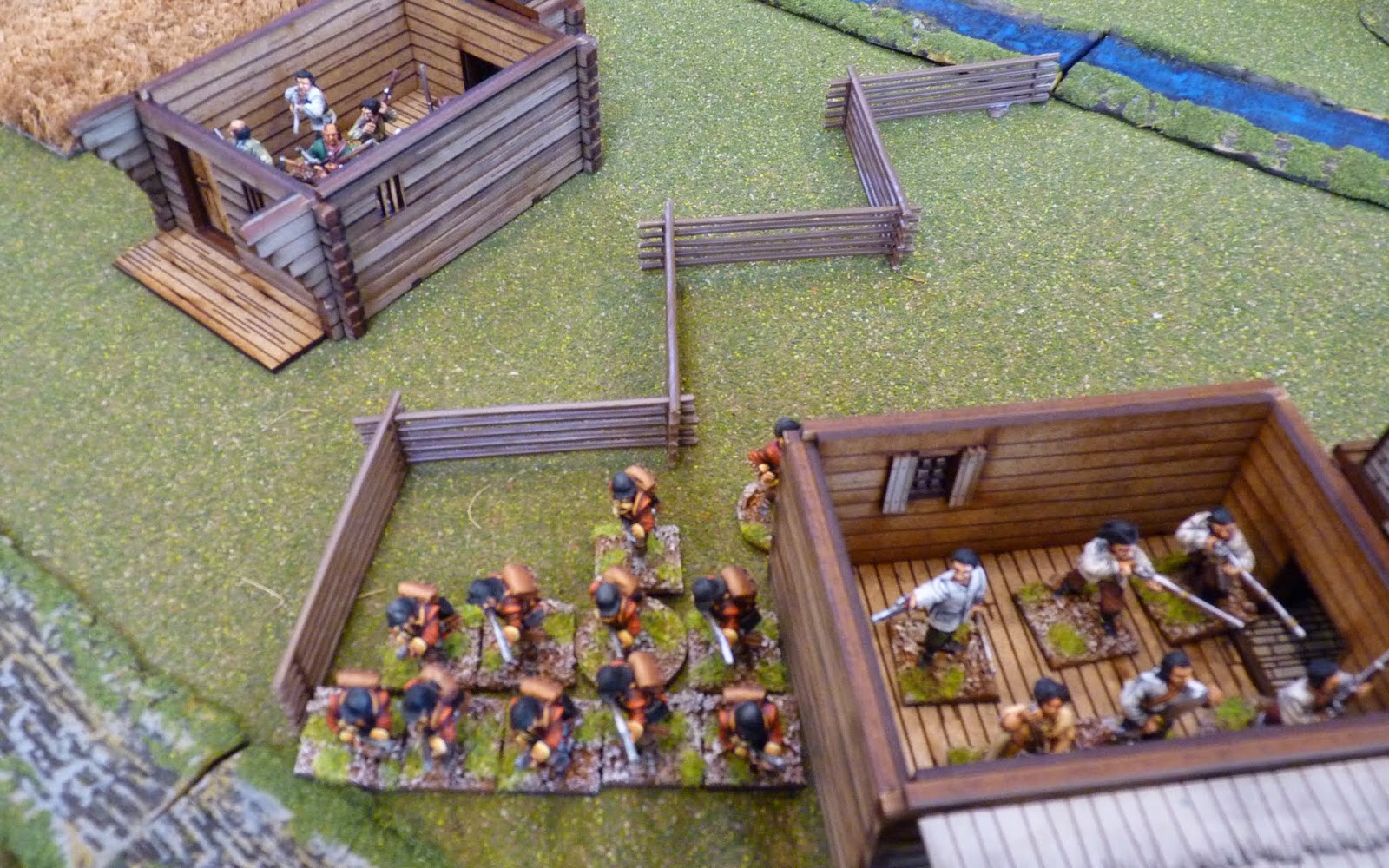 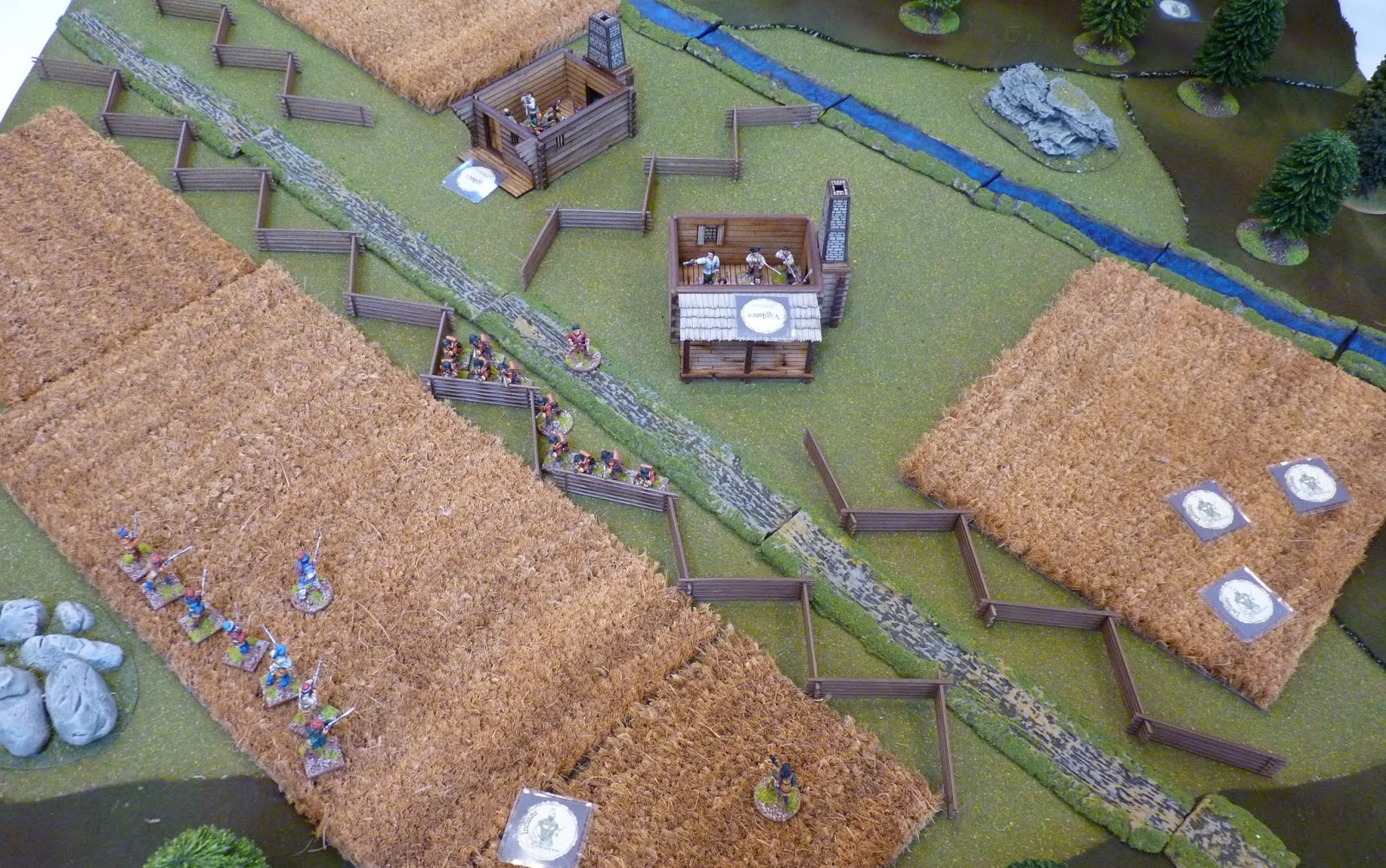 My plan was to use my French irregulars to tie up the British light infantry and send my 3 war parties through the tall corn and into the cabins.  My irregulars got excited when the British moved up to the split rail fencing.  They missed entirely with their first volley and the the British reply sent my irregulars reeling.  This was a blunder on my part as it allowed the British lights to pivot 180 degrees, reload and fire into my approaching warband. 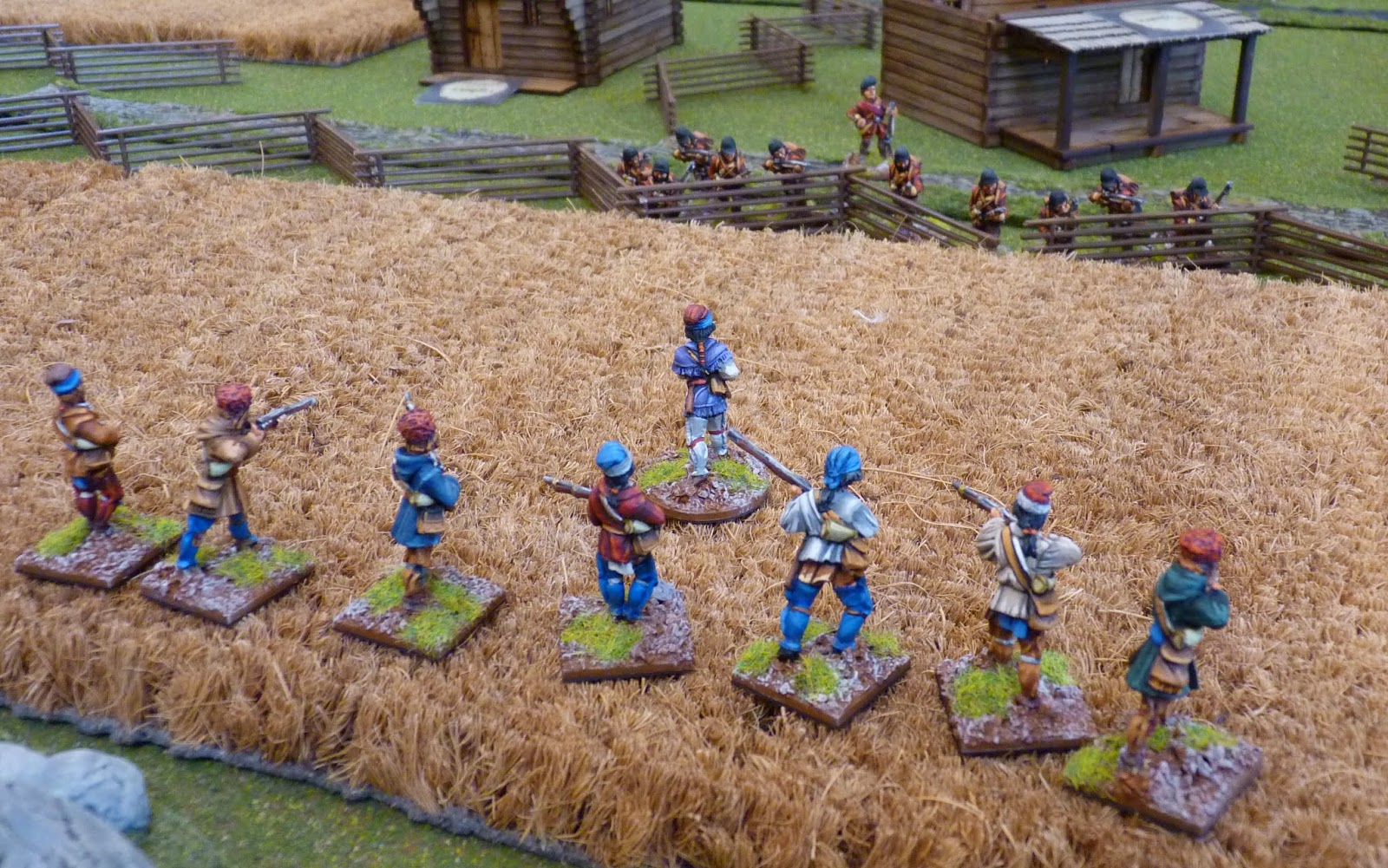 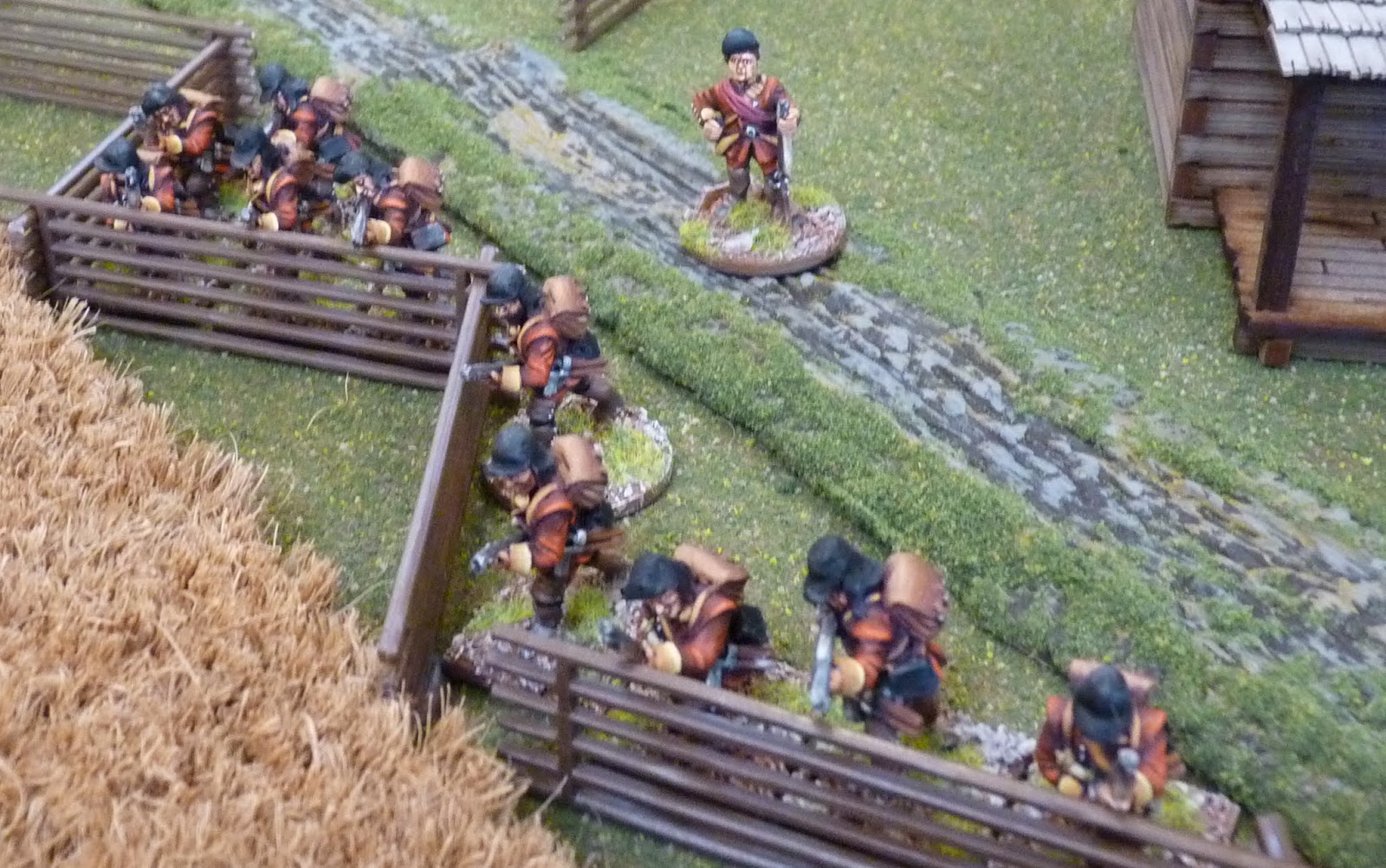 My first charge on the cabin was rebuffed by a volley from civilians manning the windows and doors. With two dead, my warband retreated into the cornfield. My other two warbands waited on Mogwai to sort out what to do next. 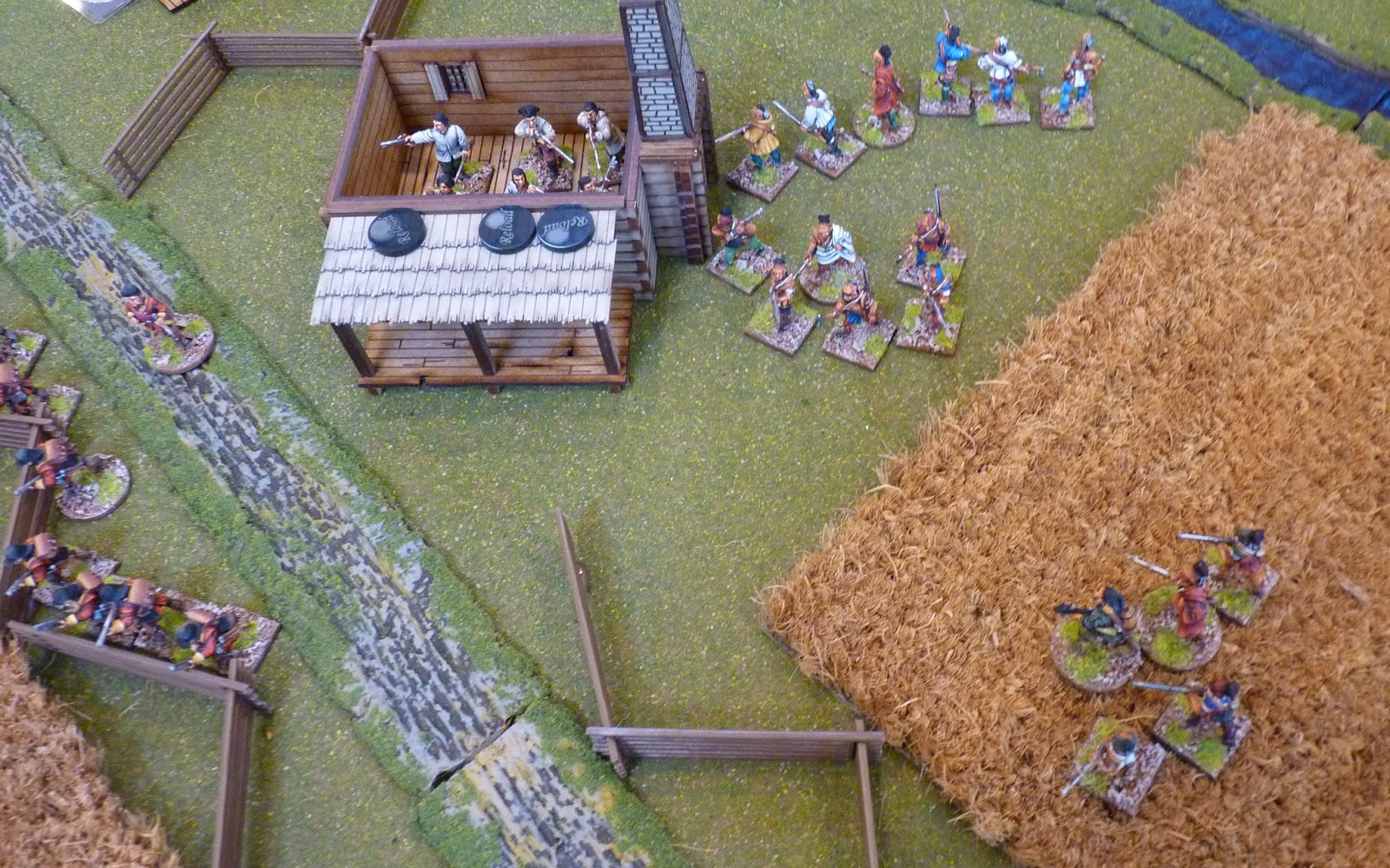 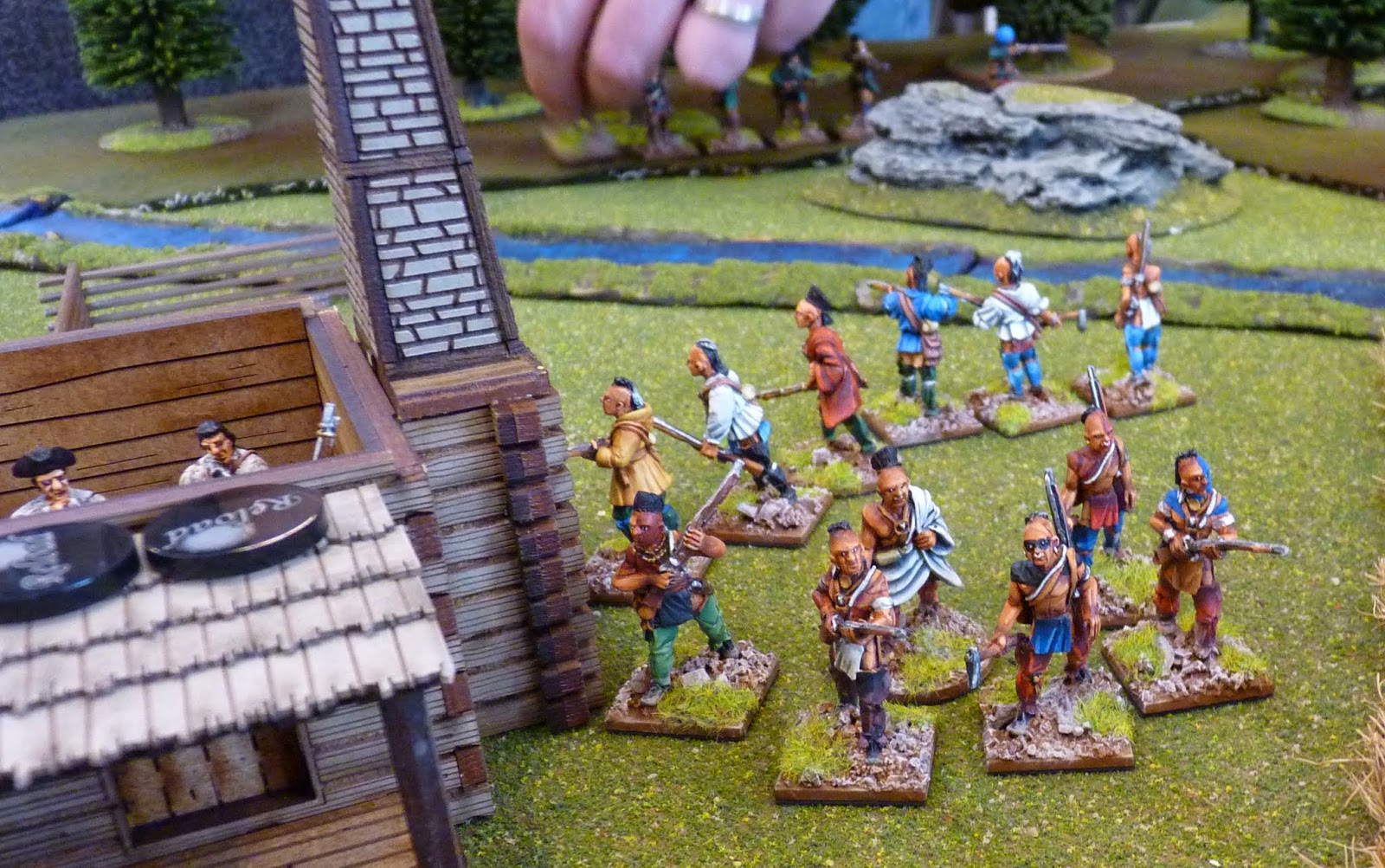 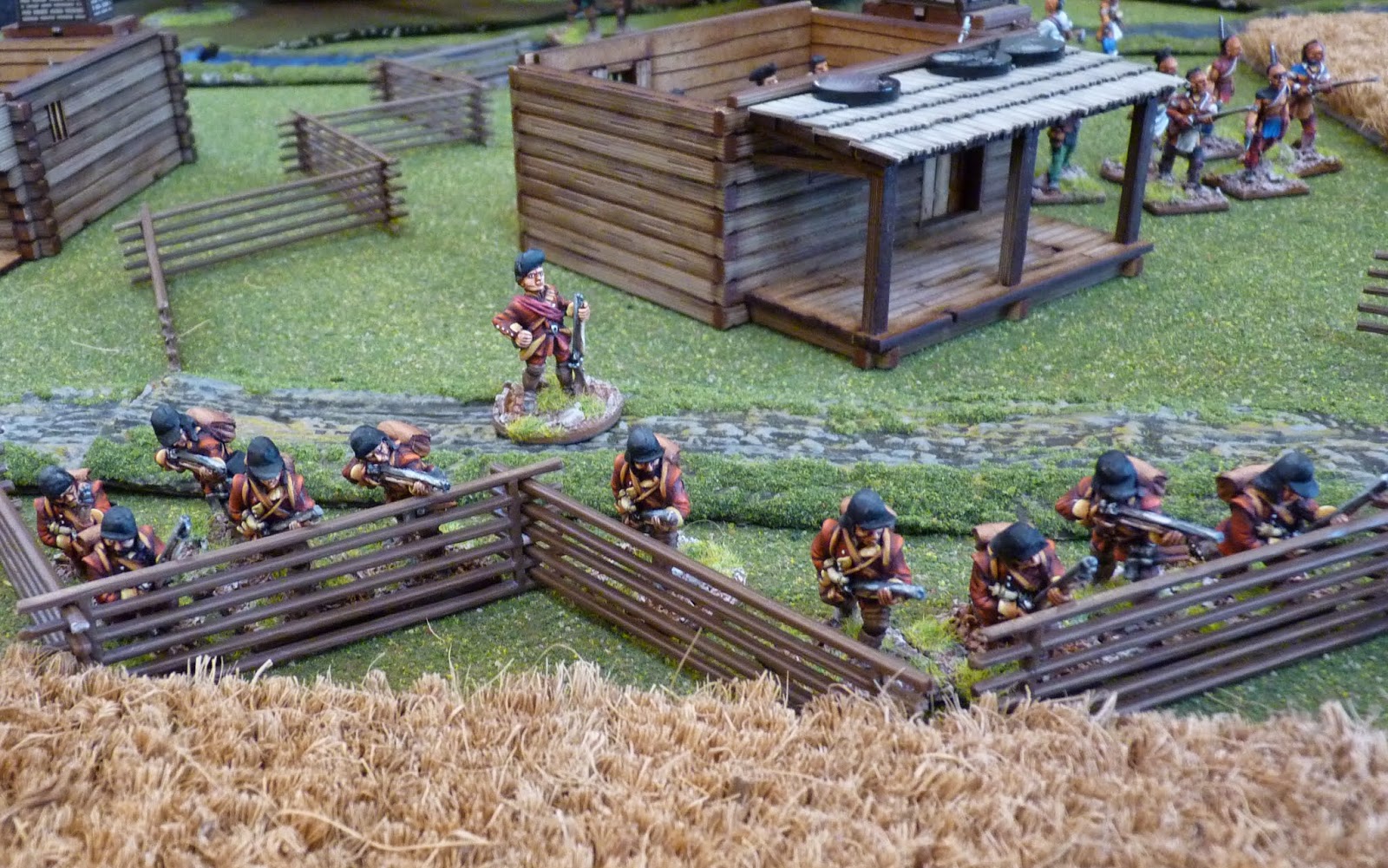 Mogwai ordered a 2nd charge into the cabin that caught the civilians reloading.  Thrown tomahawks took out a civilian and the ensuing melee panicked them into a flight out the back window.  My warband raced into the cabin in pursuit, and not a minute too soon.  The British lights crossed the rail fence and prepared to loose another volley.

Things were trending very poorly for me.  The British Rangers opened up and sent one of my warbands fleeing.  I charged a depleted warband into the British lights and failed to budge them.  The only bright spot on the board was the fleeing civilians I was about to run down from behind. 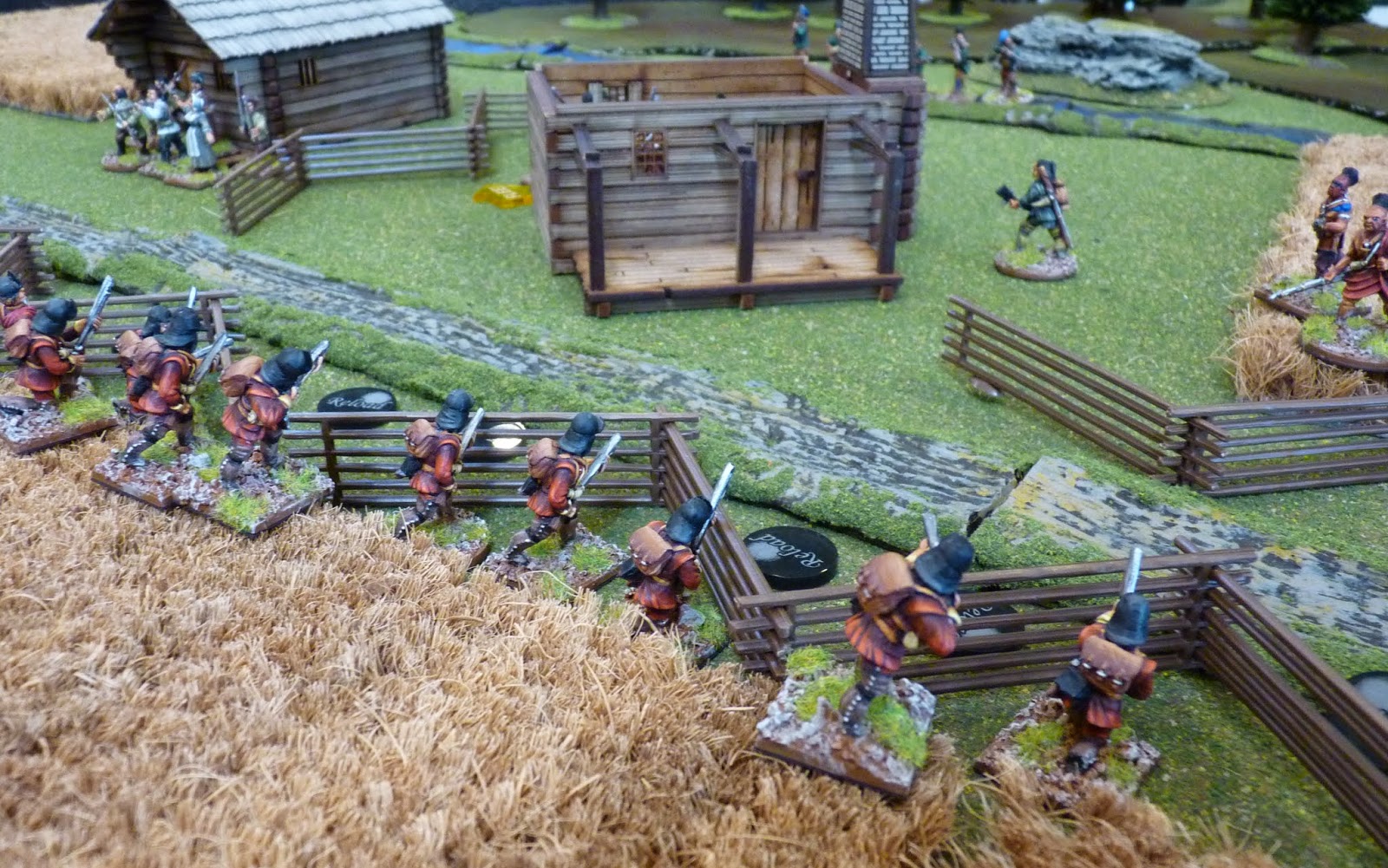 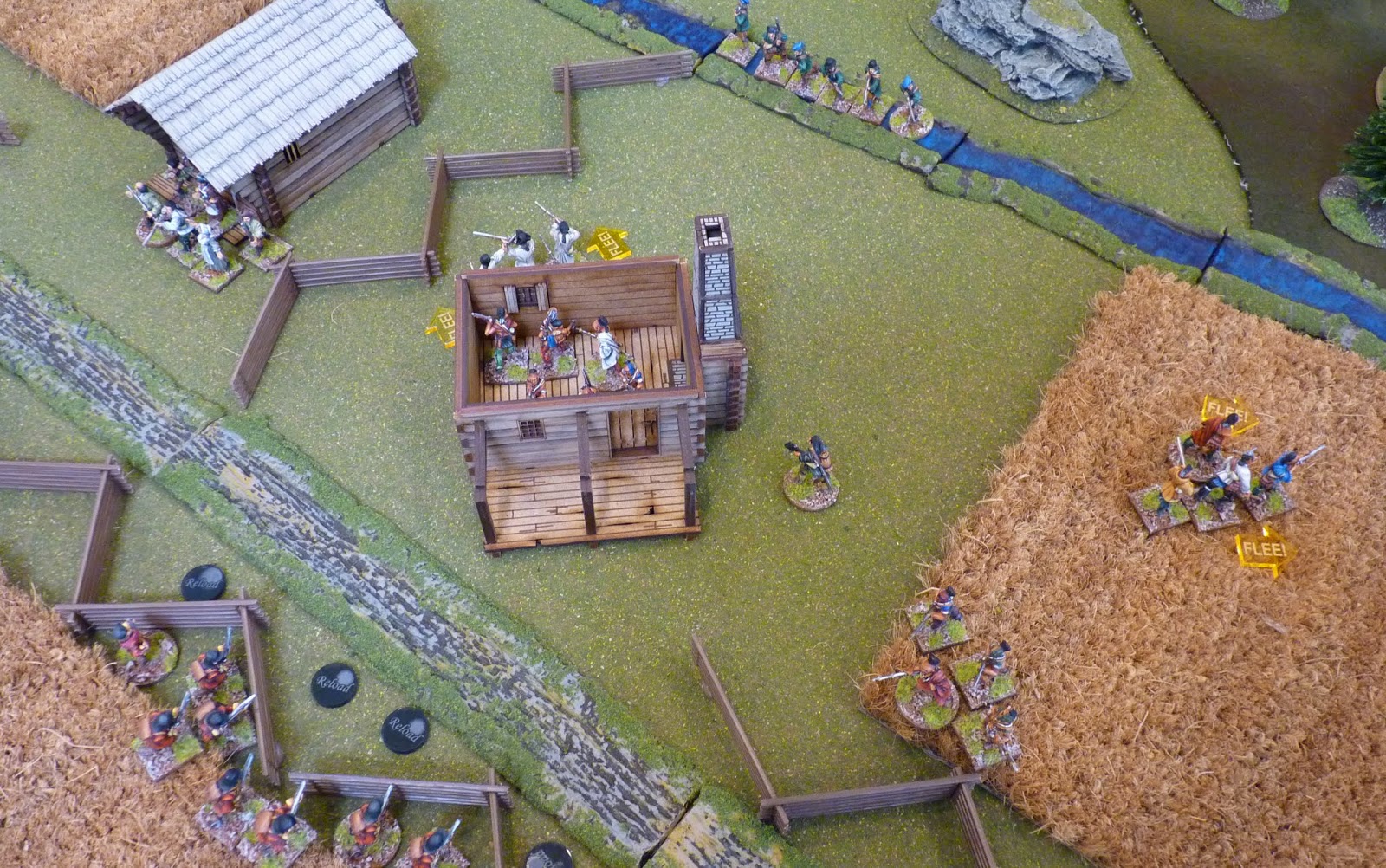 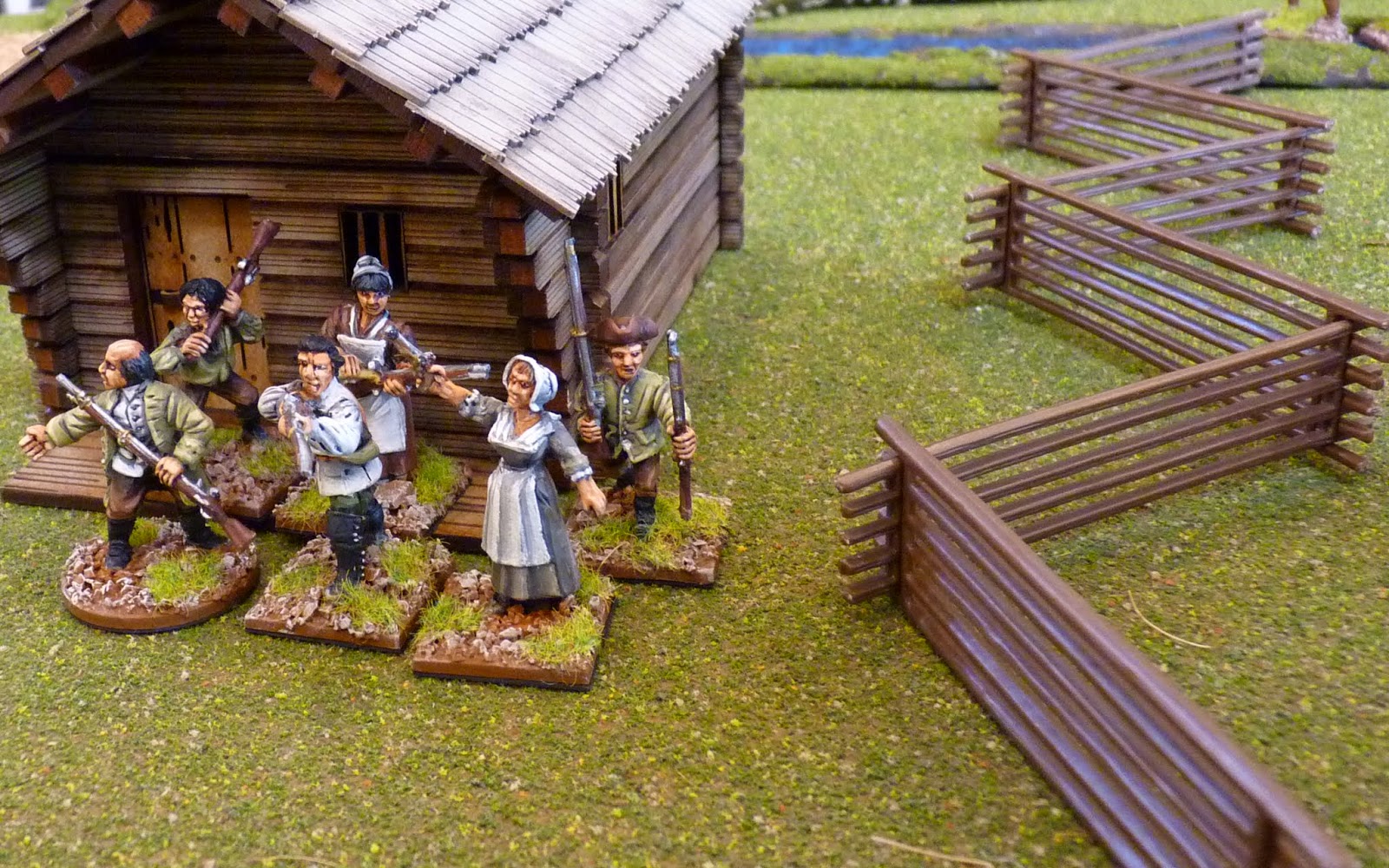 Before my warband could dispatch the civilians, the Rangers charged my warband. The short and sharp melee sent the Rangers back in flight. If they'd beaten me, the British would have won on the spot as this was my last healthy warband.  As it was, my warband caught the fleeing civilians from behind and dispatched them.  A back to back activation allowed me to turn and charge the second unit of civilians from behind and dispatch them as well.  Out of the teeth of defeat, a surprising victory! 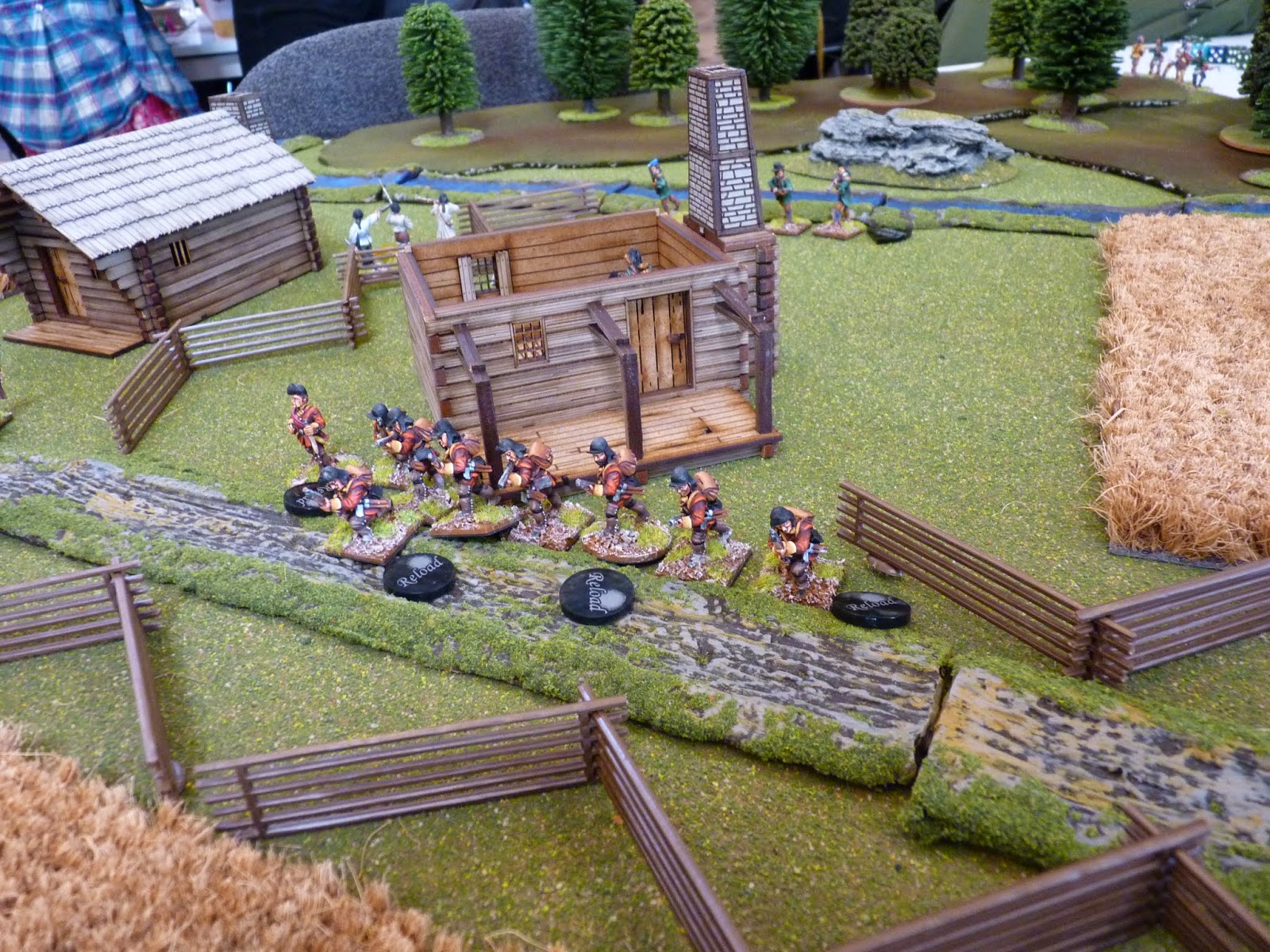 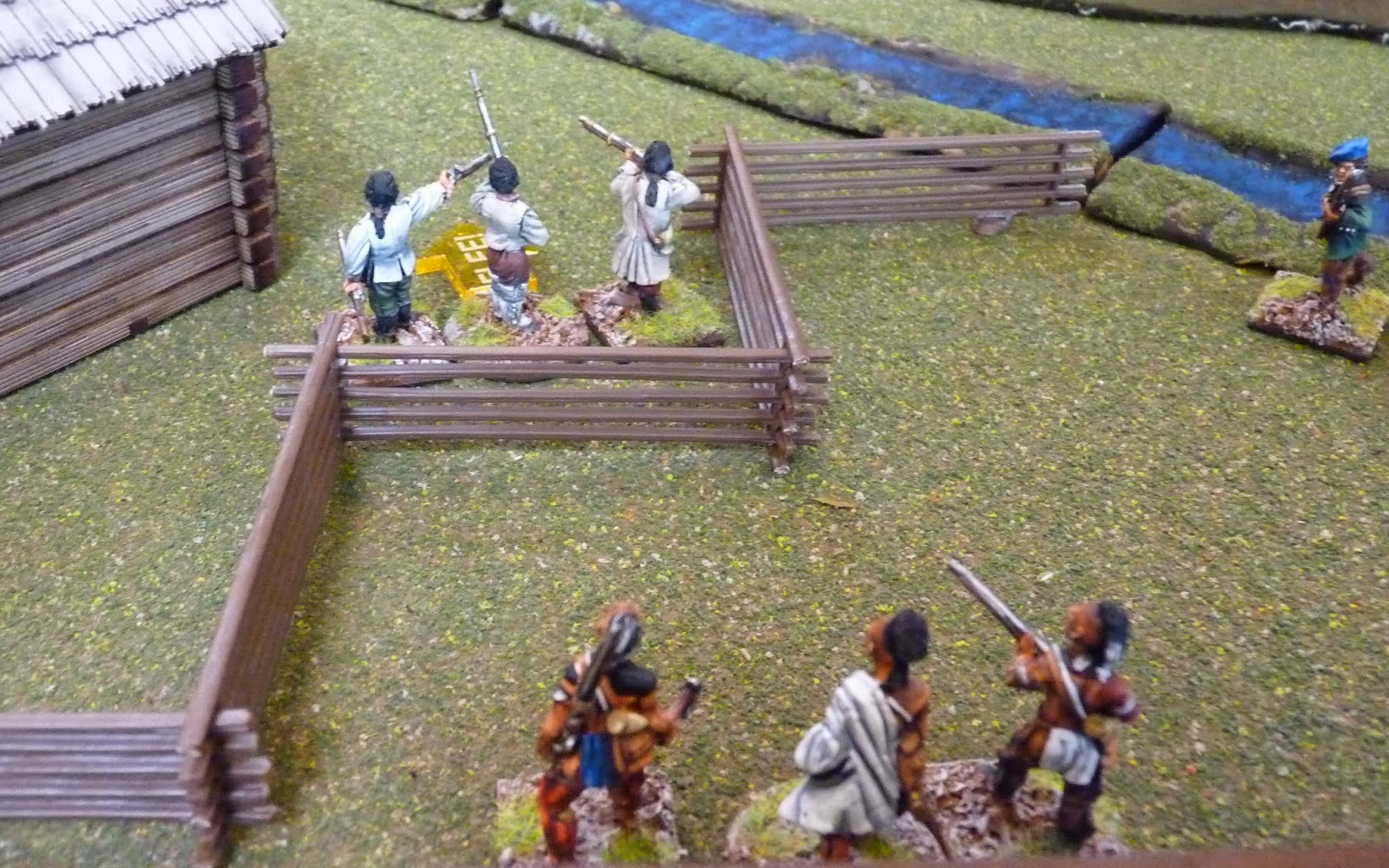 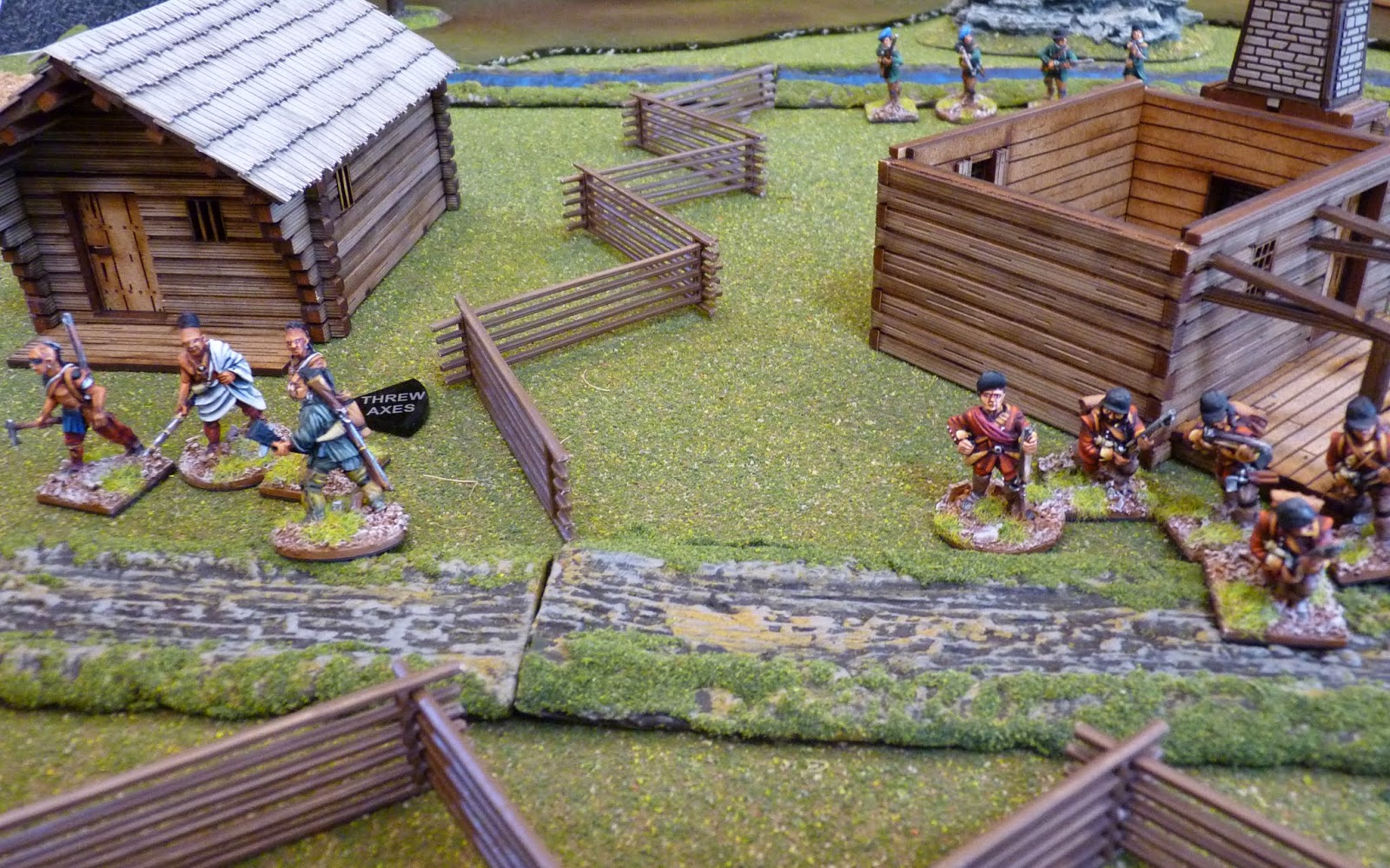 I was really taken with M&T. Our tense game had many interesting decision points and was resolved in two hours.  In particular, I loved:
I ordered up a copy of the rules as soon as I got home. Hugh and I agreed M&T is on the menu for 2015.  What a nice surprise and I have to ask myself, why did it take me so long to try these rules?