I've been looking for an ancients-related project to change things up a bit, something that can be played quickly before or after a club match.  Then I came across positive reviews for the gladiator rules Red Sand Blue Sky - Heroes of the Arena by Two Hour Wargames. Once I saw matches could be played in as little as 10 minutes, I put in an order.  With rules in hand, I needed a set of 28mm gladiator figures to paint up.  I did some browsing and found the spectacular gladiator figure line by Crusader Miniatures.

Next, I needed to find some reference material for painting and playing gladiators.  After asking around on TMP, I got a few recommendations and put in an order for 2 books.  One of them is good enough to recommend!  Gladiator - Rome's Bloody Spectacle by Konstantin Nossov can be had for a little as $10 for a hardbound book. I'm guessing that Osprey Publishing printed too many?  Fast read and great pictures that I used whenever possible on this project. 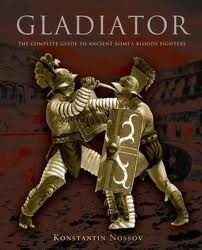 Being a history lover, I thought I knew a fair amount about gladiators but this book exposed many gaps in my knowledge.  Its full of fascinating tidbits and I'll share just a few:  "Carthaginians are also known to have held gladiator games. At the very beginning of the Second Punic War, Hannibal attempted to boost the morale of his army by having captured mountain people fight each other using Gallic weapons. The prize-winner was to receive his freedom as well as armor and the horse. Every prisoner was eager to try his luck."  (Nossov p. 13.)

Scipio got into the act in New Carthage, Spain:  "The gladiators on this occasion were not drawn from the class from which the trainers usually take them-slaves and men who sell their blood-but were all volunteers and gave their services gratuitously. Some had been sent by their chiefs to give an exhibition of their instinctive courage of their race, others professed their willingness to fight out of compliment to their general, others again were drawn by a spirit of rivalry to challenge another to single combat. There were several who had outstanding quarrels with one another and agreed to seize this opportunity of deciding them by the sword on the agreed condition that the vanquished was to be at the disposal of the victor."  (Nossov p. 14.)

During a slave revolt known as the Third Servile War, the leader of the revolt, former slave and gladiator Spartacus turned the table on the Romans when he provided a funeral in true Roman style-300  captured Roman legionaries fought each other as gladiators.  (Nossov p. 16)

And like modern boxers, gladiators participated in a public event at the forum where any citizen could drop in and have a close look at the gladiators that were to fight in the arena the next day. (Nossov p. 135).  Okay, enough yapping. Here's the first 4 figures I painted.

Referee Trainer:  My first set of figures is not necessary for playing gladiator games.  Instead, they'll be ornamentation during a game and as a side benefit, they were handy for getting my 28mm painting skills back up to snuff.

In the weeks ahead, I'll post pictures and the back story on all of the gladiator types I painted for this project.  And for anyone who clicked in last night and couldn't find a Gladiator post, I apologize.  I was working with tags and a post got published out of order.  Even though I took it down, it was showing up in cross-linked blogs.   :-(
Posted by Monty at 4:27 PM No comments:

Baggage/camp for my Impetus Mid-Republican Romans.  It was fairly boring until I added the dogs.  It's true what you've heard...dogs make everything better, including camps!  Hopefully, they'll help keep the barbarian hordes away from the  Roman baggage.  Tents by Baueda, figures by Xyston. 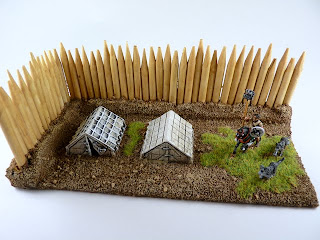 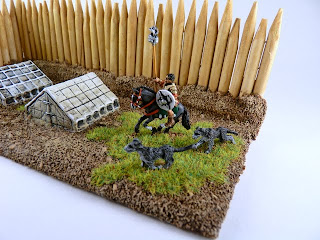 Cretan Archers and Balearic Slingers are queued up for painting next.  As mercenaries, these units are very portable and appear on many of the Mediterranean  army lists during this period. The 5 legions I've painted for Impetus plus velites and cavalry put me across the line for a 300 point MRR army.  Before I build the Roman list out any further, I'm going to paint another 300 point army for Impetus. So for now, I pronounce the Roman project finito!

Visuals are an important aspect of tabletop gaming.  Part of what drew me to Impetus is the visual aspect.  I wanted to see what a 15mm Impetus based army looked like on the tabletop compared to my Field of Glory based armies.  I put these guys out against my Carthaginians and I have to say, I'm pleased with the results!  Velites in the 1st line, Hastati in the 2nd and Principes in the 3rd line.  All in all, I think this is a fair representation of what Legions drawn up for battle might have looked like during the Punic Wars. 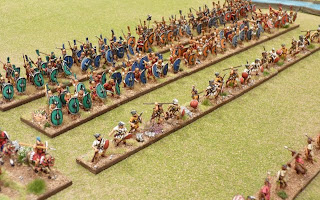 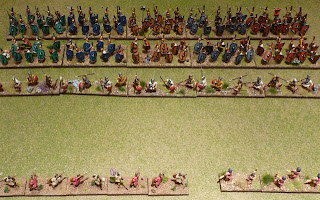 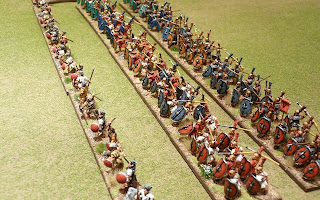 Next week, I'll start posting on my 28mm Gladiator Project!
Posted by Monty at 7:39 PM 9 comments:

Progress on my Impetus-based Mid-Republican Romans (MRR) came to a screeching halt when I discovered I didn't have enough bases for the figures I painted up. Trips to 2 local gaming stores failed to turn up what I needed so I turned to the net and put in an order with Litko Game Accessories.  And waited.  And waited.  I love their product but I hate the 3-4 week wait.

Roman Medium Cavalry:  During this era, Roman cavalry was generally "not the equal" of their opponents. I'm trying to mince words because I don't want to jinx my first and only Roman cavalry unit!  Essentially, these boys will be fodder on the battlefield. 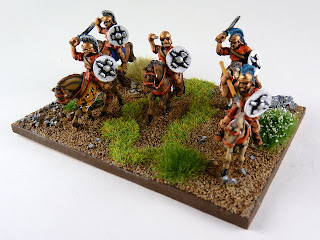 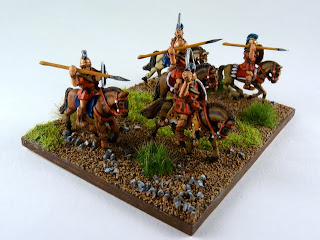 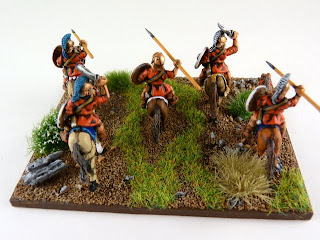 Velites:  If you know how to properly pronounce velites, congratulations!  You're the rare bird who's had the benefit of a classical education that includes Latin. As the skirmishing arm of the Roman legions, velites were composed of the youngest and poorest soldiers, armed with a short sword, javelins and a wooden shield.

For the photograph, I stacked all 5 units of Velites together.  In a game of Impetus, each base operates independently.  As a painter, I appreciate that 4 figures represents an entire skirmishing unit! 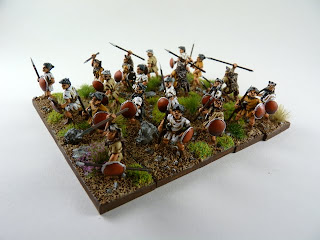 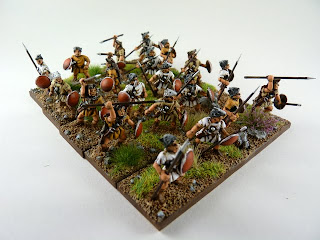 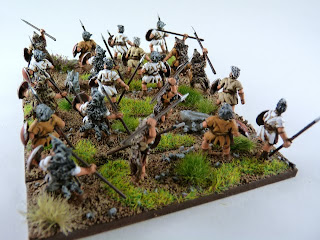 You've probably noticed that velites wear an animal's head or a bit of fur in lieu of a helmet.  I did tell you these guys were poor, right?  Before you comment on their fashion sensibilities, everyone on THIS side of the Atlantic should remember that American frontiersmen were also in the habit of wearing animal hats, bits and fur on their heads as well.  I propose that Davy Crockett was not just King of the Wild Frontier, he was also the penultimate velite! 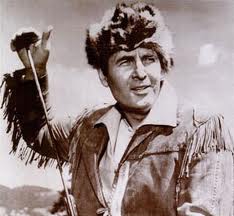 Up next will be my Roman baggage.  In Impetus, armies are accompanied by a baggage train which is represented by a rectangular base on the battlefield.  On the base, you can create a small diorama of a camp.  Loss of the baggage costs you 3 points, which is a step towards your army breaking.  While somewhat predictable, I'm creating a fortified Roman camp to represent my Roman baggage.  After that, I basically have a playable MRR army!
Posted by Monty at 10:08 AM 9 comments:

These Ottoman Heavy Artillery minis are from Venexia Miniatures and they'll help port my Later Ottoman Turks into Field of Glory Renaissance.  Bruce is busy painting up a Cossack army and we'll give FoG Renaissance a go later this year.  I found a US distributor for Venexia and bought out their entire stock of Ottoman artillery.   There's something about the freakishly enormous wheels on these. Once I saw them, I knew I had to buy them and paint them up!

I painted the metallic areas on the wheels and frame in black and then painted silver over the top, thin enough to leave a thin strip of black as a shadow. It worked to good effect, given how much metal is on these monsters.  I used Devlon Mud to blacken the ends of the brass colored barrels to give the appearance that they've been in heavy use. There's a ton of detail on these figures and such excellent molding give a painter the opportunity to shine.  One day, I'm going to have to paint up a Venexia army. 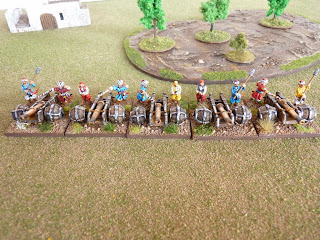 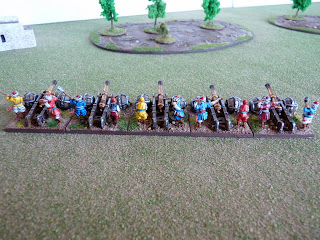 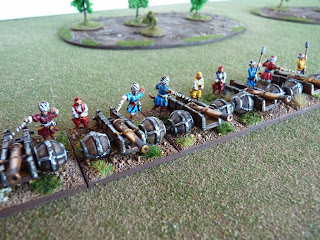 Lastly, I want to share some photos that came to me from a blogger from Istanbul named Artar. Remember the line from the movie Crocodile Dundee when Paul Hogan is threatened by a tough guy with a switchblade? Paul says "That's not a knife!" and whips out his enormous Bush Knife and says "THIS is a knife!"
Paul Hogan looks over my Later Ottoman artillery and says "That's not Ottoman Heavy Artillery.  THIS is Heavy Artillery!" 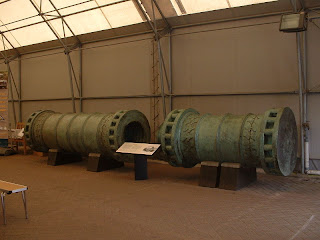 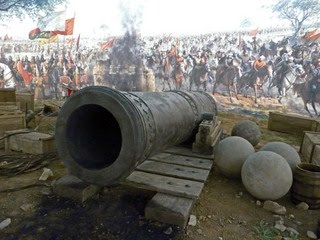 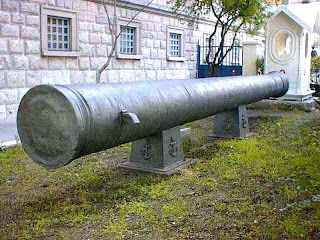 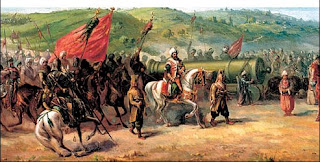