Adepticon's US SAGA Grand Melee is over and what an event it was! We played in a Great Hall on 20 themed tables with matching terrain. Our hall was decked with banners, shields and a slaughter chart covering an entire wall. We had loads of Gripping Beast and Kraken Skulls swag, event T-shirts, SAGA beverage glasses, Viking reenactors and a shieldmaiden too.  Eric Hagen managed the impossible and topped last year's stellar event.

20 teams participated in the Doubles and 38 individuals played in the two day Single events. To a person, everyone I played was a great sport and passionate about the game. My only regret is how quickly the weekend flew by.  Next year, I think I'll take up SAGA after dark.
Doubles was fun tune up for the Singles event.  After a big opening win, Brent and I faced the UK SAGA Grand Melee 1st and 3rd place champs running Irish. My Rus Princes were blockers while Brent's Irish rushed the hoard.  On the last play of the last turn and the last throw of the dice, they knocked us off the hoard. Snatching victory from the jaws of defeat is what champions do. So close, we could've earned bragging rights for at least a week. A wonderful couple and how lucky are they, traveling and playing SAGA together?  I really have to have a talk with my wife.
I opened the Singles event with 2 crushing victories and Swiss Pairing promptly punished me with Andy again! His Irish featured Brian Boru & Ulf the Quarrelsome. Ulf was made for the Challenge scenario we played. While my warlord got smacked around by Ulf, his Irish camped in forest and rocky ground, winning the game on might points.  I enjoyed the opportunity to play and lose to Andy a second time. And I did get him to laugh which I count as a win of sorts.

Stephen the Viking rolled into the Great Hall with a Viking crew.  Stephen has raised my SAGA IQ in our email discussions about builds and strategies.  I couldn't believe my luck when I drew him for my last game. We laughed, shook hands and threw dice.  His Franks have the most difficult battleboard in the game and I was curious to see them run. Unfortunately, he couldn't throw a shield (a common die) for his battleboard and his combat dice left him entirely. I sent my Druzhina in; charge, melee, rally to the banner, repeat.  It was not clever or subtle but it was enough to steal the game.
I had to leave right after the game to start a 6 hour drive back to the Cities.  Thoroughly exhausted, I wanted as much  daylight driving as I could get.  Shortly after I left, I got a text saying I won Best Sportsman. I earned the moniker "Mr. 11 Minutes" because that's how much I missed the closing ceremonies by.  D'Oh!  My helpful friends Photoshop-ed me back into the event.  Lesson learned, I'll better sort this out next year. 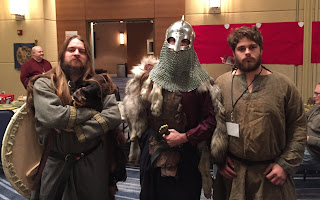 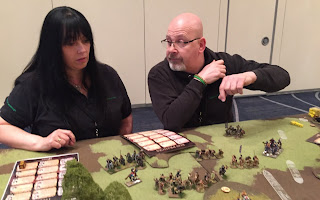 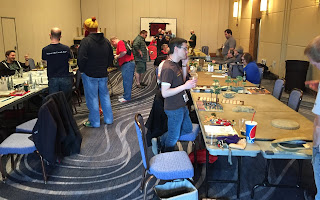 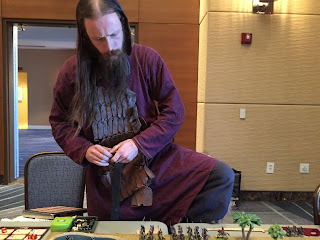 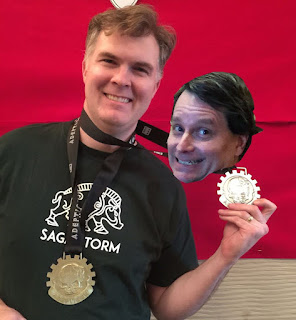