Great Escape Games keeps DMH fresh with a steady stream of new figures, gangs and color items. First up is the Tong Gang.  If you're a fan of the HBO series Deadwood, you'll recognize the fellow with the meat cleaver as Wu. Sometimes after a bad day at work, I too shake my fist and meat cleaver at the heavens. I had a bit of fun mixing up my blacks with green, blue and grey tints. 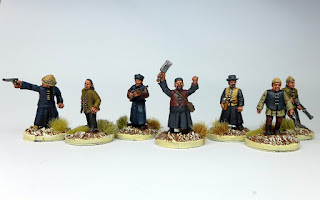 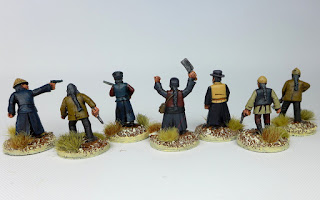 More Zombie denizens for the Curse of Dead Man's Hand.  A bit gruesome and colorful! 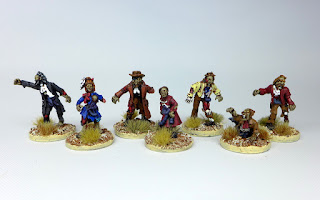 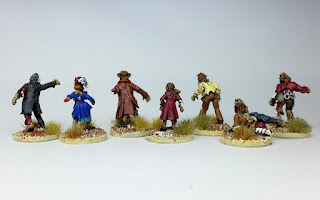 The Count and his motley gang.  Here's hoping they're as fun to play as they were to paint. 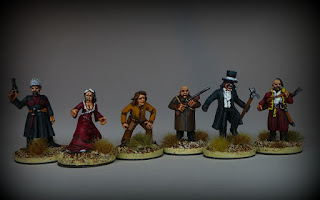 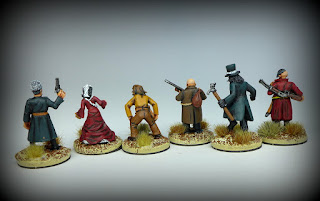 Lastly, a hodgepodge of color items for the game. Rest easy, I sourced the snake colorings (other than the anaconda) to the American West. Today's post shows why painting for Dead Man's Hand remains one of my favorite subjects 3 years on. Where else do you get to paint snakes, zombies, horses, zombie cattle, Dracula and Wu too? 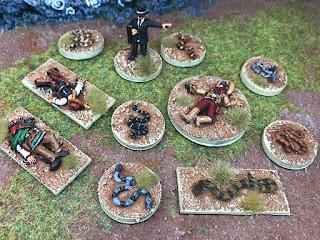 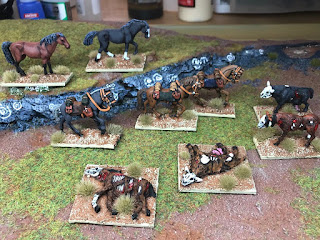 Fellow blogger Jason Meyers aka Der Feldmarschal is running a sharp looking Bolt Action event this weekend.  This set a fire under me to finish my Rubicon T-34/76. I had trouble with my airbrush splattering on my last highlight.  To cover it up, I had to go over everything a 2nd time and wiped out my panel highlights.  Ah well.

I put my 1000 point Soviet force out on my battle board for pictures. Now I need to read the rules a time or two and I'll be set for the big game day. 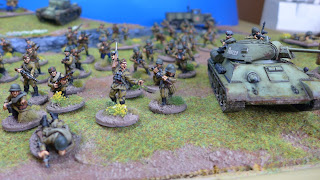 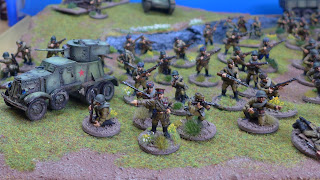 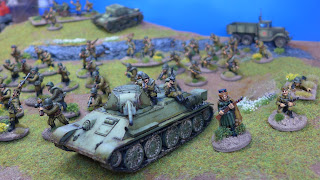 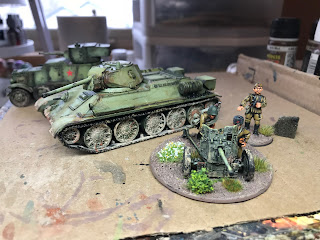 In other East Front action, my friend Hugh and I fired up a Chain of Command Citadel campaign. We finished the 1st campaign representing Gross Deutschland's attack at Kursk with his German's nudging out a minor victory over my Soviets.  The scenarios featured the early German attempts at a breakout. The Germans fielded a Tiger tank in 3 of the games and it was a monster!  In one, I stopped it only by popping an ambush with a flamethrower at short range.  The Tiger panicked and withdrew.  In another, my ZiS-3 and the Tiger traded shot after shot. The Tiger wised up and moved out of sight behind a building.  My crew manhandled the gun forward until they could take a shot at the beast.  And brewed it up. Epic! I was too engrossed in our games to get many pics but here is the showdown between the ZiS-3 and the Tiger. 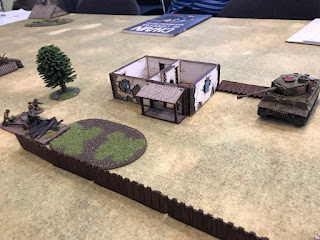 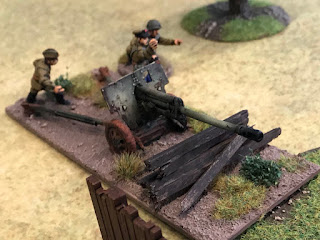 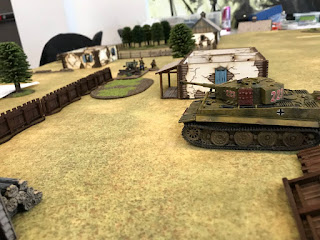 We're going to start Part 2 of the campaign. After fighting Round 1 with no tanks, I'll be painting 3 T-34s for a scenario where I can field up to 4 of them.  Should be great fun and I hope to report back "The Tigers are Burning!"

Campaigns are the best.  I love the color, narrative, and story they bring. TooFatLardies always does a great job with their supplements.  I had only one platoon to see me through my first 5 engagements. I had to play conservatively to keep my force intact and that after all is the whole point of a campaign.  Bonus, this gave me the impetus to paint up a platoon of Black Tree Design Soviets to replace my Warlord plastics.
Posted by Monty at 5:19 PM 15 comments: