Last week, I wanted to see if I could get a nice shadow effect by painting neatly on an ink wash on white primer.  I usually block paint, acrylic wash and highlight but this time, I'd start with neat painting on the inked figure, cutting out the acrylic wash, leaving the ink to give the shadows.  I quickly realized this was not a time save but I could see the detail better than painting a figure primed white or black.  So THATS why some of you prime black and drybrush with gray before you start!

The result is a decent and darker look but not a time saver.  At 3 feet, I can't distinguish these from block, washed and highlighted figures. If I keep this, it'll probably be to highlight the detail only for painting. 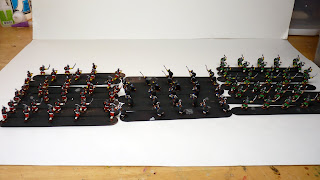 I've got Dailami archers and ellies in the pan!  I'm excited about doing Arabesque ellies.

Bottom's up! Naked Gauls and a burst of 15mm madness...

With my Welsh warband sidelined by a lost parcel of shield transfers, I jumped back into 15mm with both of my size 11 1/2 feet.  First up, 96 Naked Gauls. I've paint 2 Gallic armies in the last 2 years. Each army was a bit of a trial or chore, depending on how fondly I remember it  Under Field of Glory v2, Gauls are slightly less rubbish than before so I thought, three times a charm?  The question I sought to answer in painting this bunch was, can I gut my way through painting Gauls a 3rd time? The lead photo is a bit of a spoiler!
Gaesati warriors will be the core of my Gallic army v3.  Gaesati are rated as Superior, Impact heavy foot, and naked as the day they were born. Nakedness does not provide a combat bonus but it is a +10 bonus on the painting table.  These fellows started with Army Painter's Barbarian Flesh primer.  2 coats of GW flesh wash later, the actual painting started with flesh highlighs.  The time saved by their nakedness was quickly lost in the shield stage.  There isn't much room to work with on these shields.  Still, it went down well and I'll order up the rest of the army from Old Glory.  I might grab my 12 stands of chariots from Splintered Light as they are spectacular to paint and look at. 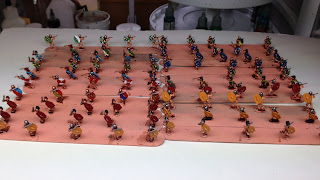 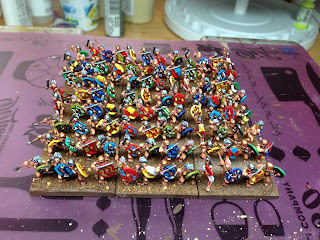 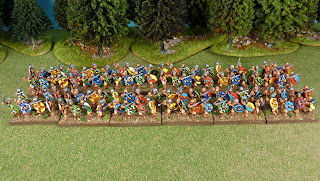 I also finished up the Russian SYW cannons. We're firing up another Maurice campaign in the weeks ahead and one of our Field of Glory regulars has left the ancient world to join us in the 17th century.  Klay, I hope these cannons give good service in support of your new cause!  The best thing about painting these Old Glory figures was, no shields!  2nd best thing was they're all wearing trousers. 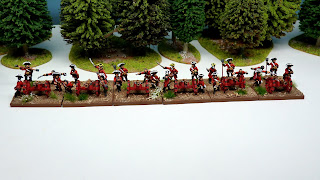 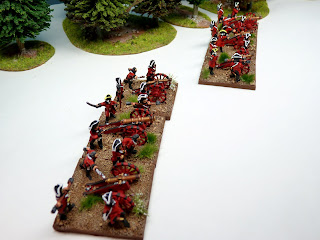 I sold my 15mm Carthaginian army last week and in the process, created a few holes in my ancient Spanish army. To fix one of them, I  just finished up these Old Glory Spanish light horse.  I clipped the plumes off their heads so they'd fit in better with my Xyston Spanish light horse.  These lads are poor and rough, so I went for a loose painting style.  I did sneak in some bright colors to keep them from disappearing off the tabletop!

I sold off the slingers I was using in my ancient Spanish list so here's a few more in a bit of an experiment. I'm going to see what I can do with inking in 15mm.  If I paint neatly, I should be able to use the ink for shadows.

Lastly, 96 Dailami warriors in the paint pan in case the Welsh shield transfers don't make an appearance. So, enough about me.  How was your weekend?

I drove to The Source on Sunday to get in a game of Saga.  Freezing rain made for treacherous driving, so my buddy Hugh had to turn around. Just like that, game off.  The silver lining in the snow filled cloud was I spend the rest of the day painting.  It was either that or axe through a door, poke my head through and yell "Here's Jooohny!"  My family was having none of my cabin fever antics, so, off to the painting table.

This Welsh warband is built with both a foot and mounted warlord.  You can only run one warlord per warband in Saga but by painting up both, you can choose which to run depending on the scenario. Since this batch is the hearthguard and warlords, I put the pedal to the floor for colors and stripes.  We are the 1%. Look upon our clothes and weep, levies and warriors!

You've probably noticed that I've hit a road bump with the Welsh.  The LBMS shield transfers are still in the mail, probably looping endlessly around the globe.  In the meantime, as I finish each batch of shield-armed Welsh, I have to stop at the white shield stage and move to another bunch.  Posting up nearly finished figures is a bit like a date ending with a kiss at the front door.  Nice, but perhaps not all you'd hoped for.  Sadly, it'll have to do for now!

I still haven't got the hang of the work in progress posts.  By keeping my cellphone handy, I remember  to take a picture from time to time.  That's good!  With each batch of figures, my work surface gets messier and that detracts from the pictures.  That's bad!  If you think my painting surface looks messy, you should see my hands.

A few of you have asked if I'm done with 15mm.  To that, I thought I'd show rather than tell!

I hope it's warm and beautiful wherever you are.  Birds singing, flowers blooming, and green grass.  I remember those days; the days before I moved to Winterfell.  Right now, we're getting another 6"!
Posted by Monty at 3:44 PM 19 comments:

Norman Warlord and his Retinue

More, more, more Saga!  I had 9 Gripping Beast Norman Milites left from the big Norman lot I acquired in December, so I figured I'd paint them up. As they are the last of my mounted Normans, I took extra care in painting them up.  I didn't use the AP dip/brush this time, instead opting for an Agrax Earthshade wash.

No painting pegstands with this lot.  I glued them straight on their horses and painted away.  I was going to base the  warlord and his bannerman together but that fizzled when I discovered only one horse and rider fit neatly on a 50mm warlord base.  In the alternate, I'll  keep the warlord and his faithful bannerman a matching pair on the tabletop.

While painting shields on the last two batches of Normans was good practice, I had LBMS shield transfers sitting unused.  So, shields and banner by the always superb LBMS.

I worked the shield colors into the helmets for some of these lads.  That kind of color coordination is probably fantasy but pleasing to the eye.  I also took care in picking up the shield tranfer colors and blending them into the shield rims.  The result is seamless enough that a couple of my friends thought these were scratch-painted!  I should have said, "why of course..." and let them marvel!

I've got a game of Saga on the books for this weekend.  I hope to post up an AAR next week.  All painting and no play makes Monty a dull boy.
Posted by Monty at 11:16 AM 39 comments:

With every new project, I like to read up on the armies and era I'm painting.  Saga has given me the perfect opportunity to dig into the Dark Ages, where my knowledge is a bit thin. Admitting that up front, here's a quick overview of the Dark Age Welsh.

A Welsh army was generally made up of lords, retainers and locally raised free men over the age of 14.  Welsh warriors dressed in linen shirts and pants, covered by a wool cloak down to the knees. Hair was kept short and mustaches were common.  Their primary weapons were the spear, axe and bow.  Spearmen could operate in close or loose order as the situation demanded. Javelins were common and a circular shield was often employed. Welsh bows were made of elm and fired at close range as an ambush weapon.  The Welsh longbow would not make an appearance for some hundreds of years.

The Welsh tended to rely on agility and cunning rather than armor.  They relied on ambushes and raids, utilizing the rough and hilly terrain covering much of .  was preferred on marshy or broken ground, which favored the Welsh's mobility.  Their initial charge was a headlong assault accompanied by a storm of javelins.  This might be followed by feigned flight to lead an enemy into a trap, a common tactic for lightly armed and agile troops. Spirits were raised with battle cries and war trumpets. The initial charge was fierce but if it did not break the enemy, the warriors often lost heart.

Over the weekend, I grabbed 3 lines of triad paints by Reaper Miniatures.  They just might be the paints I'm looking for.  Big plus that they come in dropper bottles!  After I get a chance to put them to use, I'll post up on how they compare to Vallejo.

And if that isn't enough to bring you back, it's on to the adorable Welsh ponies and riders.  I'm very pleased to say that Gripping Beast did an outstanding job casting the Welsh horse. Short, stout and almost cuddly!

Viking Berserkers, long hafts and all

When I popped these Gripping Beast  Berserkers out of the box, I noticed the axe hafts were very long, with one axe being taller than the figure.  It didn't look right to my eyes so I considered clipping the hafts down.

Fortunately, I didn't do that because t tapestry clearly shows axe hafts nearly as long as the axemen.  Plus, there's a theory that a longer haft was reflected social status or ranking.  It will surprise no one that men have been worrying who's longer since at least the Dark Ages!

Hurstwic is a wonderful website loaded with background information on all things Viking, including the use of axes in battle.  As it turns out, a long axe was useful for:
The haft can be used to parry and strike, much like a fighting staff. The video HERE shows how an axe-armed Viking might have fought and defeated his sword & shield armed foe.  It's fascinating to watch and once again, shows my imagination is limited by my modern experiences. And here is a YouTube video of a History channel demo of the Danish axe worth a watch as well!

I tried to share my new-found knowledge with my family at the dinner table.  When I asked if anyone knew how to use a two-handed axe, my son replied "With two hands?"   That was pretty much the end of Professor dad's history lecture for the evening.

These Gripping Beasties come with LOADS of character.  I bent the arms on the fellow in the grey wolf cloak so he could wield a 2-handed axe like his mates.  I spent extra time making these shine since they are the killer unit in any Viking warband.  Throwing 4 dice per figure (rather than 2) in melee makes you belle of the ball in a Dark Ages mashup.

I'm loving the Foundry skin triads and mulling over investing in a full set of Foundry paints.  Their system takes the guesswork out of color jumps for 2-tone and triad painting.  I just have to figure out the paint pot versus dropper bottle angle. And the price. It always comes down to money, doesn't it?

Next week, it's back to the Welsh with a post-up of the warriors.  If you look closely,you'll find the Welsh warriors in this picture.  Waaay, way in the back. Farther.  Keep looking...yea, those guys!