Cry Santiago and let slip the javelins of war! My Spanish warband for SAGA is done.  Mustering across the table are 2 warlords, 12 Caballeros, 32 Jinetes and 10 footmen.  The warband is made up of El Cid Crusader Miniatures with some Gripping Beast Arabs for an "Andalusia mercenaries" look.

My prior Spanish warband was Gripping Beast Normans painted in a yellow and red color theme. I much prefer these Crusader Miniatures. If you're going to paint Spanish, do have a look at Crusader!   I  used Stronghold Terrain's metal bases with rare earth magnets.  Love 'em, they really hold fast to the bottom of my transport boxes! 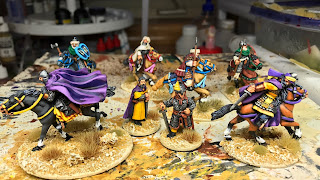 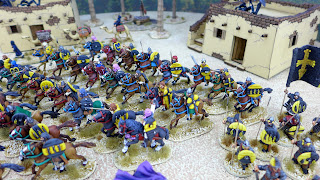 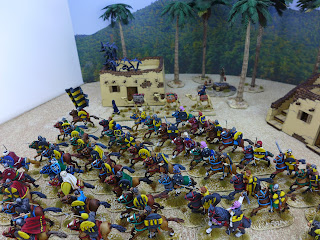 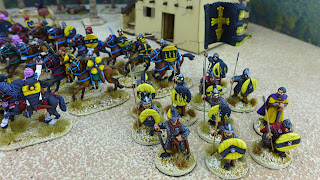 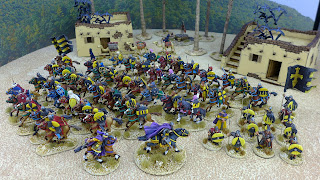 The Spanish will travel to Chicago for the US SAGA Grand Melee in March.  I'm going to pair them with my buddy John R's Milites Christi in the Doubles Tournament.  The Spanish are not good at melee and in a melee game, that makes them tricky to run. The Milites will be the hammer while my Spanish will annoy and trip up opponents with out-of-turn activations via Iberia. Hammer and rapier, it should be a fun combination!