Bring out Your Dead Man's Hand!

I keep Dead Man's Hand in regular rotation. Win, lose or draw, there's nothing I play that generates quite as much color or laughter at the tabletop. Great Escape Games upped the ante this spring with Dead Man's Hand Down Under. This installment takes us to the Australian frontier, along with Ned Kelly, the State Police and Bushrangers.

The Ned Kelly gang are, no surprise, my favorites!  Their cobbled together armor is modeled perfectly with dings and holes throughout. I touched it up with a bit of rust weathering.

The Bushrangers are tough lot.  In a game that models Hollywood's version of The Western, I love having a tough moll in my gang. Life is tough for a bushranger and they have the worn out clothes to prove it!

The State Police are all about the business.  Looks like a few of them rolled out of bed for the big showdown.

To round out the drop, I finished the prisoner set and Rogue's Gallery characters.

And a small painter's note, I've finally switched over to gray as my primer color.  It's true what they say.  Over time, everyone goes gray.  ;-)

On the gaming front, John S and I got in our annual game of DMH "Dead Again."  Once a year right around Halloween, the dead come back to haunt Coyote Gulch.  For a time, it looked like the Dead had the town in hand.  After two failed Big Nerve tests, both sides fled the town and the game ended in a bloody draw!

If you're celebrating, have a great Halloween tonight.  Game and paint on!

Months ago, my friend Hugh started painting a Carthaginian army for L'Art de la Guerre.  He asked me how I paint 15mm ancients and we began trading emails. Hugh edited our emails into a painting guide for me to share out.  Great work, Hugh and thanks!

Before you start, it's important to map out what you need at the finish line.  I don't always do this and I invariably regret skipping this important step.  It's faster to paint an army in one go rather than in dribbles and drabs.  For big projects, you might even drop your plan into a table like this one. 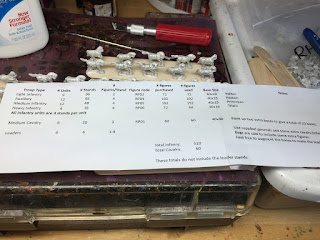 So, onto The Method:

1. Clean up mold lines and flash. If shields are separate, attach using the “Ticky Tack Stick" method. Zip Kicker or similar CA glue accelerator is highly recommended for this.

2. Group similar figured poses together and mount 4-6 figures on a craft or ‘popsicle’ stick using white glue. Similar poses on the same stick speeds up painting. Leave enough space between figures so you can get at each one with a brush. 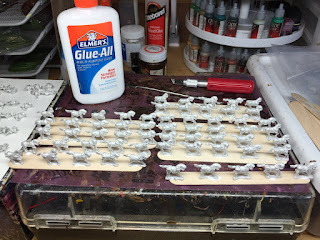 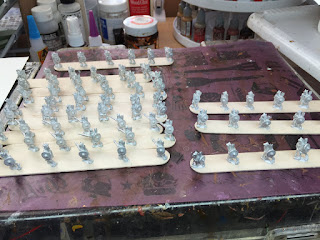 3. Prime with Army Painter Leather Brown spray primer. This is a time saver as you'll see later on. 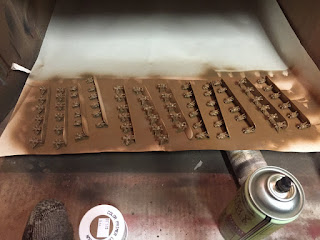 4. Block paint in your base colors:

A.  Flesh on faces (not arms, hands or legs yet!)
B.  Brass or bronze on metal helmets, greaves, shield boss, breast plates.
C.  Black on metal parts of weapons—spear heads, pilum shafts, sword blades—and plumes too.
D.  Shield base color (can also do after wash step if you want a brighter shield color) 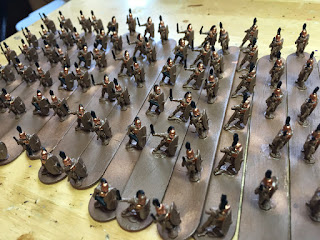 5. Paint on a heavy brown wash. I recommend Vallejo's Game Color Sepia Wash or Army Painter Strong Tone. In 15mm, I don’t mind the wash pooling as the shadows will help your highlight colors pop.  Let the wash dry completely before proceeding.

A.  Flesh on hands, arms, legs, and highlight face if you think it's too dark from the wash. You can highlight the forehead, cheeks, and chin if you'd like. For sandals, hit the toes with touch of flesh and it’ll pop nicely.

B.  Metal on swords, spear points, and pilum shafts.I like to leave a little bit of black showing between the metal and wood on spear shafts for contrast.

C. White/linen tunics or other tunic color. Leave wash/primer color in the recesses for shading and just paint the raised areas of the tunic.

D. Paint neatly and the AP Leather Brown primer can be left 'as is' on boots/sandals, belts, and backs of shields as a time saver! 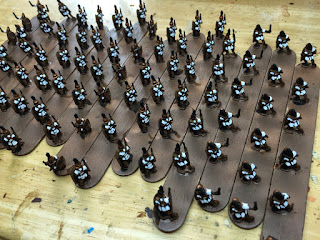 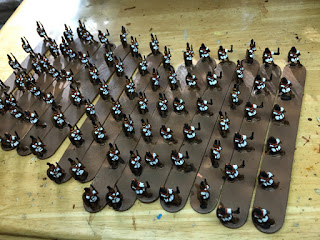 F. Highlights on helmet plumes or other decorations in appropriate color. 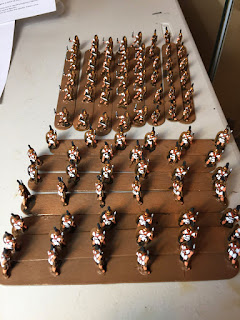 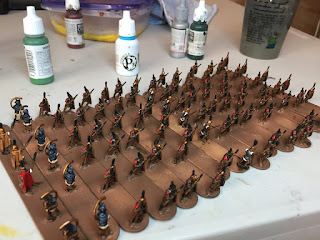 G. Paint shields your chosen base color then highlight with a brighter color with ‘dots’, ‘wiggles’ or ‘arcs.' Leave the base color showing through and a bit of the wash in the deepest recesses/borders to get three colors for depth—base, wash and highlight. Detail with patterns/symbols appropriate to army. You can also use shield transfers but in 15mm, I find it's quite time consuming. Take your time on the shields as they are the most visible part of  your ‘ranked up’ ancient infantry.

H. If the brown sepia wash dulled the bronze colors too much, you can give them a quick highlight to along the tops and edges to make them pop. 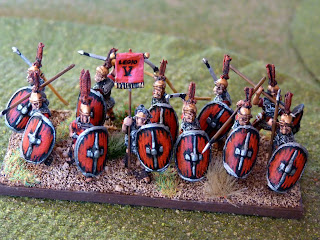 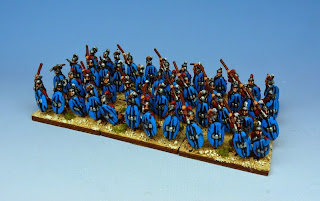 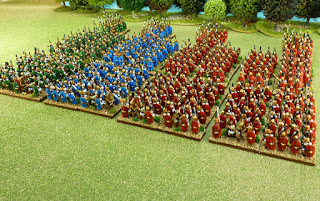 I hope this method might help you paint your armies in a reasonable amount of time and to good effect.  Good luck and good gaming!