If you give a Szeklers a bow...

The Szeklers were the finest horsemen in Medieval Hungary, fighting as lance, bow and sword-armed cavalry. Noted for their fighting skill, they played a key role in defending H from the expanding . The Szeklers enjoyed autonomy under the Hungarian crown. Their lands were outside of traditional Hungarian law, including taxation, and their only obligation to the Crown was to supply troops for military service.

Szeklers Armored Cavalry:  In Field of Glory, Szeklers cavalry options are what make the Later Hungarian army list sizzle.  They can be taken as Armored Superior cavalry with bow and sword.  That means they can melee with anyone except knights.  As Superior mounted bow, it's probably wiser to deploy them in a single line and evade when charged, shooting your enemy to bits.  After knights, they're the best Hungarian troops on the medieval battlefield.

Szeklers Light Horse: You're probably thinking, "Light Horse? Yawn."  As the best horsemen in the region, it should come as no surprise that they can be taken as Superior.  Did I mention they're sword and bow armed? They outclass most Light Horse in period. I painted 3 units of these fellows, all the better to tear up the enemy Light Horse.

Painting these Essex horsemen left me wanting more.  I'll scratch that itch by ordering up a horse-heavy Essex army, once I can decide on the army!

I've got a new army under way to celebrate the launch of Field of Glory 2.  V2 is supposed to be released in October so I need step away from the blog and get painting!
Posted by Monty at 7:41 AM 13 comments:

After a year layoff, it's good to be painting Essex figures again.  While Essex gets grief from some quarters over the limited poses, there's no company with a larger line of 15mm Medieval figures that I know of.  And their horses are simply the best in this scale.  I have some Xyston horses on my painting table and they look small and thin by comparison. The same goes for Old Glory.  Here's the first batch of reinforcements I painted up for my Later Hungarian commission.

Foot Archers:  Cheap and nimble filler, really cheap if you take them as poor quality.  But then you'll have to hide them on the battlefield!  Forest green uniforms will help them hide in the woods if that's necessary.

Crossbowmen:  Like the Foot Archers, crossbowmen are cheap Light Foot filler for the Hungarian army.  Cheap doesn't mean they can't look fabulous and their yellow & black combo work looks quite stylish.  Essex cast the crossbow separately from the figures and that extra step worked quite well for these figures.

Up next in the batter's box are Szekler Light Horse (x3) and armored Szekler Cavalry.
Posted by Monty at 10:14 AM 22 comments:

I've been working through my lead pile while I'm between projects.  In my stack, I had 6 TYW cannons and gunners by Old Glory.  I bought these to port my Later Hungarian army into Field of Glory-Renaissance. As it turned out, FoG R in 15mm never got off the ground locally.  And more significantly,  I recently sold my Hungarians.  I painted these up for practice (and eBay) and I have to say, they're good molds.  For a changeup, I left the black primer in places for shadowing, separation and facial details.  It looks quite good in 15mm and I'll use this old school technique again.

I was happy to sell my Hungarians but felt a bit blue as I packed them up.  That was a bit odd since I'm not the sentimental type.  I found solace in the fact that the buyer is a skilled FoG tournament player in the US and International circuit.  As an added bonus, I got a commission to bulk up the army so one more time, for old times, I'll paint up Essex figures for Matthias' Black Army. The Hungarian word for forward is elore, so elore with the Hungarian project.  And one day, I do hope to hear how they've ripped it up on the FoG circuit.

One last thing...Mark and I started a Maurice campaign and we got our first game in at The Source.  The game was a blast, with loads of people stopping by to watch or comment.  It went right down to the wire but I don't want to say any more since Mark has the AAR up at his blog.  Its a great retelling of a great day of fun.  Check it out! 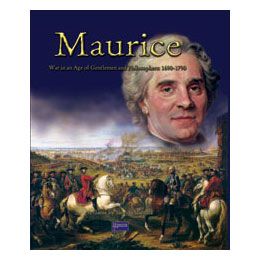 Field of Glory v2 - peeking under the hood

While the Field of Glory v2 rules are still pending, the major changes have been announced and tallied up in the Slitherine forum.  Brandt and I decided to play a match with as many of the changes as we could keep track of via a couple of printouts.  I brought Later Carthaginians because I wanted to test the new elephant rule where they get 3 dice per base at impact.  Brandt surprise me with an Indo-Greek army I'd never seen before. Apparently, he wanted to test the new elephants as well!  Almost everything in this Indo-Greek army shoots, with the exception of the elephants.

7 pieces of terrain ended up on the Indo-Greek side of the table.  If Brandt had been running his favorite Late Republican Romans, this would have caused havoc for him. Because he was running an army of medium foot archers with swords, it was no trouble at all.  D'oh!!! 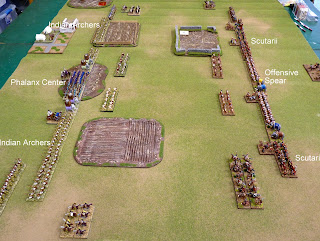 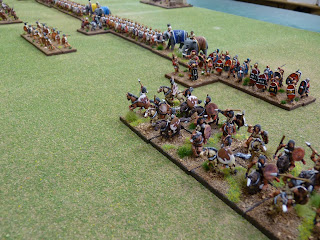 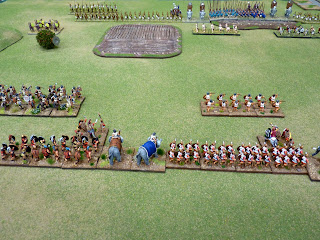 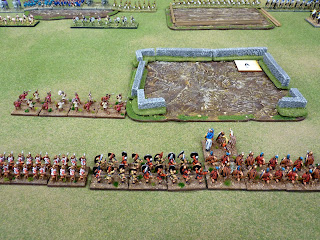 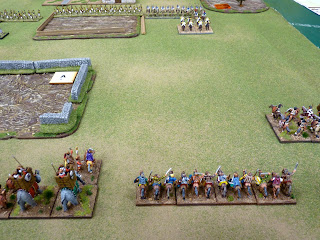 It's been months since I played FoG and it showed.  V2 limit how many battlegroups a commander can command in a battle line based on the quality of the commander, making field commanders worth the extra cost in the early game.  I got confused over which of my commander was commanding which troops and allowed my Scutarii on the left wing advance by themselves.  That was a rookie mistake that would cost me dearly.  In FoG, you just can't let a unit get isolated by itself like that. 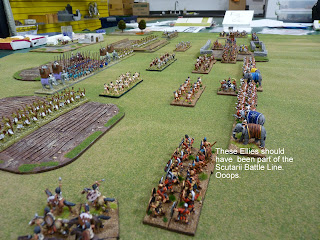 On both flanks, I advanced into a hail of arrows, underestimating the effectiveness of the Indian medium bowmen.  After impact, I found out these bowmen were packing swords. D'oh!!! 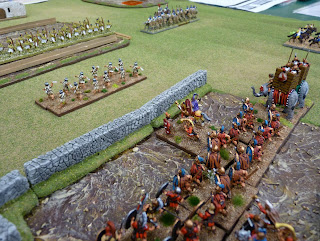 In the center, I got an early break when Brandt charged this elephants to drive off my skirmishers. Their variable charge move of 6 inches put them far ahead of the rest of his army.  A battlegroup of 8 bases of African Spear took his charge, with overlaps on both sides of the ellies.  I was tossing 8 dice to Brandt's 4 but to no effect.  The ellies took all the hits I could muster over 2 turns until  his phalanx caught up and charged home.  Once they went in, my own ellies went bust when I threw a 1 for their first death row.  Then my African Spear collapsed under the combined weight of the elephants and the phalanx.  In a single turn, my center evaporated.  I could still win on the wings, right? 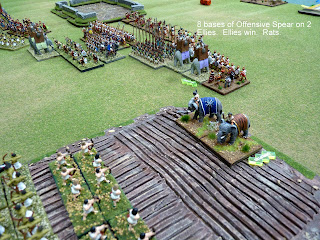 On my right wing, Indian bowfire disrupted my elephants and Scutarii as they went into a charge. The Ellies had to pass a death roll.  DONT THROW A 1!  I threw a 1 and goodbye ellies.  Two death tests for ellies, two 1s.  I told Brandt I was imposing a self-ban from running any list that include elephants.  Sorry Jumbos, its for your own good. 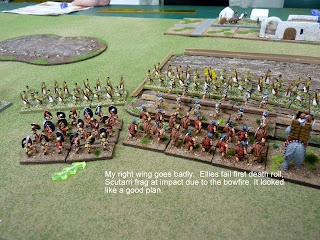 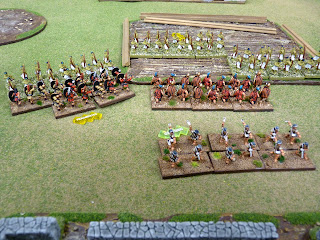 On my left wing, I had small success with my last unit of Ellies but it was not enough. Center gone, right wing gone.  Chance of success...gone. 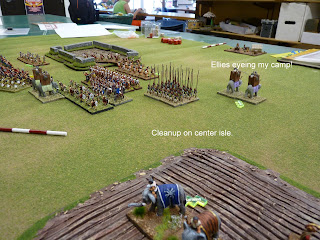 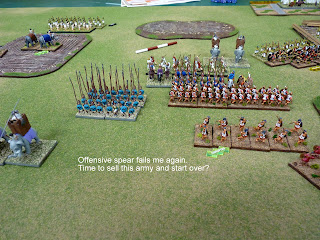 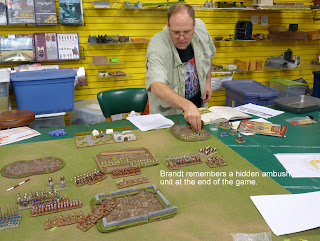 Brandt played another skillful game.  He held his  bowmen in terrain and let me come to him.  I obliged and got shot to pieces on both wings. It's back to reworking my Carthaginian list.

I found the v2 rule changes to be uniformly excellent and I'll be a day 1 purchaser when they're released.  It was only a single test but my feeling is that games will be shorter and more decisive.  For example:

These and other changes will shorten melees, which can grind on and on.  With a combined 31 battlegroups on the table, our battle was shorter and more decisive than usual.  I think that's a good thing as I find it frustrating to spend 5 hours in a match without a clear winner at the finish line.

We really liked the changes that make skirmishers less slippery.  I especially like the change where a single level of armor advantage does not give a + POA if it would result in an overall ++POA.  That means barbarian foot are no longer a walkover for Romans. Two very big thumbs-up to the rule changes and gameplay under v2.

P.S.  I'm excited enough about v2 that I ordered up a pile of Xyston to build my first new FoG army in a year. As a hint, the army name appears in a song title on The Clash's London Calling.  Between that and Xyston's limited army list, this should be easy to crack!

Email ThisBlogThis!Share to TwitterShare to FacebookShare to Pinterest
Labels: Field of Glory

Elephants:  4 new stompies for my Carthaginian army.  I put some effort into the blankets since they're going to see battle without war towers. You have to look good to feel good, even if you're a war elephant! I decided I'd made the tusks too large and trimmed them back a bit.  Then again, the North African Forest Elephants used by the Carthaginians are extinct and I could claim some artistic license. 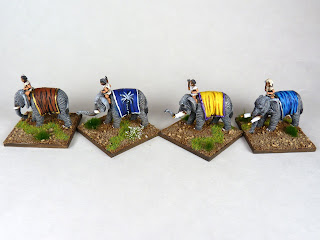 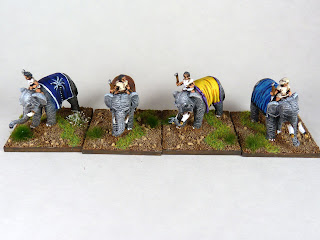 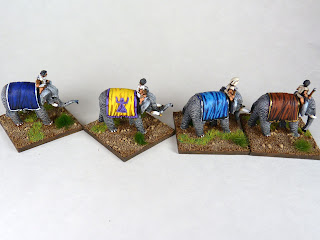 In Field of Glory, the Later Carthaginian list allows 6 elephants BUT if you take a Numidian ally, you can field 8 in total.  Elephants will reportedly get 3 dice per base at impact in FoG 2.  We're ready to bring it, en masse. 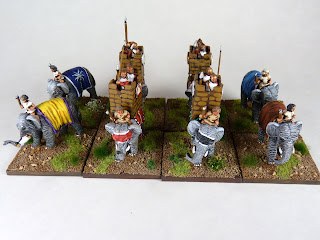 Thureophoroi:  My Thureophoroi, based as Medium Foot, give the Carthaginians another unit to contest and fight in terrain.  They can be paired with a unit of elephants in a battle line. 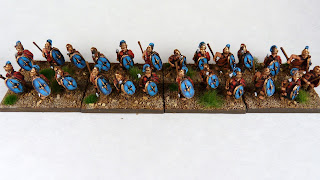 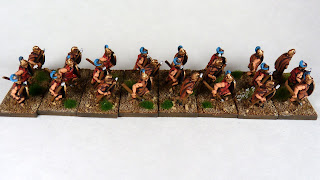 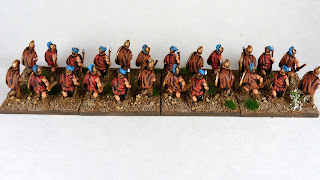 Slitherine announced that version 2 will be published in paper and digital format after all. That's excellent news as an iPad/laptop only version would have scotched Field of Glory 2 in our club.  We've been reading the announced list of changes and we're quite anxious to give them a try.  So anxious in fact that a buddy and I printed out the list of changes and put them into a game with my newly painted Carthaginians.  I'll post the AAR next week with a few observations.  The short version is I'll be a Day 1 purchaser when the new rules hit the market.  Two years of tweaking and field testing has paid handsome dividends, in my opinion.
Posted by Monty at 6:04 AM 19 comments: