Whiskey in the morning -a SAGA AAR

I met up with my buddies Brent and Jack for a game of SAGA over breakfast. They ran the Irish against my new Anglo Danish warband in the Clash of the Warlords scenario.  This is a straightforward match where killing the enemy warlord wins you the game. Barring that, the game ends after 6 turns and the two sides count casualties to determine a winner.  Fast and furious, just the way we like it.

Brent won the setup and made sure the Irish had loads of terrain to hide in & shoot out of. To avoid the Irish ability "Sons of Daina," where rough terrain come alive with missile fire, I squeezed my troops into the open ground.  It almost looks like they're forming square.  There was hardly room enough to swing a Danish axe!

The Irish opened with a double move into the woods with the wolfhounds, hearthguard, 2 Irish heroes and the warlord. Two flavors of breakfast whiskey appeared and soon, everything seemed a bit funnier. One of the great things about SAGA is you can tip a bit and still play.  I don't normally drink whiskey, or this early, but it was the weekend and I was playing a new warband.  Reason enough to celebrate!

The first 4 turns of the game were slow played by both sides. The Irish wouldn't come out of the woods or move into charge range.  I wouldn't move within 4" of the woods. I used the Danish ability Trapped to stack fatigue on 3 Irish units a turn every time I could.  With no obvious target, I waited for an opportunity.

Then Brent and Jack had a stroke of luck. Rolling well, they turned 6 SAGA dice into 8 on their battleboard and maxed out their 3 shooting abilities.  They stacked all 3 of the abilities on a unit of Irish hearthguard, who wiped out my hearthguard in single volley despite my Shieldwall defensive ability.  This was stunning blow and one I calculated would cost me the game.  I hit back in my turn but I was way behind with only 2 turns to pull a rabbit out of an Irish hat. Smelling blood, the Irish went all in on their next turn, destroying a unit of warriors and shredding my levy slingers. The loss of units reduced my SAGA dice from 6 to 4.

Insult to injury, they unleashed the Irish wolfhounds as well!  The dogs were the only combat I won in the turn.  Look closely at the shot  below to spot a narrow path to victory for the Danes. Deep in the woods stands the Irish warlord and his champion.
Barring my way were wolfhounds and a champion.  To have a chance, I needed to throw the equivalent of consecutive 6s to turn my 4 SAGA dice into more dice for activation and abilities.  My rolling was red hot and I turned 4 dice into 8. I went from "I don't have a prayer" to "I can do this!"  After loading up my battleboard, I sent my warriors in. They made it through the wolfhounds, through the hero and to the warlord.  They lost and bounced back exhausted. My hearth guard followed in their wake and took the Irish warlord down, earning my very first win against the Irish.  And to think, I almost conceded the game!

My gaming opportunities increased greatly after my son went off to college.  SAGA, Maurice, Dux Britanniarum, Field of Glory and even Lord of the Rings have all been on the menu of late. As we head into the Thanksgiving holiday here in the US, I have many things to be thankful for.  One is that I get to see and participate in the Golden Age of Gaming.   These are the days, my friend!
Posted by Monty at 9:10 AM 39 comments:

Which way the lead mountain?

After a decades long layoff, I came back to miniatures as a father-son project.  My son wanted to play Warhammer Fantasy so I bought unpainted collections at Bartertown. In short order, I had a plastic mountain of Orcs & Goblins, Dwarfs, and Tomb Kings.  Being new at this, my son and I were very slow painters. That plus assembling the figures meant it took us many sessions to finish a single unit.  And there were so damned many GW boxes! What was I thinking, buying 3 armies at once?  Every time I got a peek at the plastic mountain, my enthusiasm for painting sunk.  When my son moved onto the world of music, I was left to finish the lot myself.

I did eventually finish at a rate of an army a year but the experience left a mark.  When I quit fantasy for historicals, I decided to avoid this mistake.  I use an accountant's precision to plot my purchases.  I keep a first in, first out (FIFO) painting system. Before I start a new project, I finish the old one.  With this push, my collection of unpainted 28mm minis is down to 6 figures.

These fellows fill some  gaps in my Viking and Anglo-Danish warbands for Saga.  I used triads with the cloaks but I toned down my color jumps and washed to flatten them out for a more gradual transition.

The slingers add an important shooty element to the Anglo-Danish warband. Being levy, they're quite dull to look at.

Running out of things to paint, I also finished some Saga color items including aditional fatigue counters.

With my Just in time inventory system maxed, I'm back to sifting through unpainted lead at Bartertown and browsing Architectsofwar.  I've got my eye on more Dark Age figures.  It can't hurt to keep a lead molehill, can it?

Strategos and his men

Like a proud dad, I want to show off my new "baby."  I showed this bunch to my neighbors and my parents before boxing them up for  California. Yea, you're probably wishing you were MY neighbor!

I love this warlord figure.  I do wish the horse came in full barding but perhaps this model represents a moment when the Byzantines were short of cash.  Paying the Varangian Guard and bribing invading barbarians to go away has a way of putting a dent in the treasury.

Four of these Saga fatigue markers go out the door with the warband and one goes to my Normans.

With the lovely Gripping Beast figures and bright palette, the Byzantines were my favorite war band to paint to date. I'll come back to them again by book and perhaps, by paintbrush too.  I love  painting Dark Age war bands but I'm also on the lookout for a bigger project in 2014.
Posted by Monty at 3:39 PM 65 comments:

If you saw the B word and thought, "it's Greek to me," you're correct! It's Greek for Byzantine. Hopefully you'll also see a tight and bright palette here. All Gripping Beast figs and I should mention the warriors have lots of kit on them!

TOXATOI: These bow-armed warriors come in handy with the SAGA battleboard abilities Massed Archery (fire over friendly units) and Support Archers (shoot into a melee disregarding friendly units in line of sight).

KONTARATOI:  Spear-armed warriors.  The "prime white & wash with Burnt Umber ink" is back in play.

PSILOI:  Javelin-armed levies. Even though levy foot are looked down on in Saga, I've seen them pull off amazing feats.  If nothing else, they soak up lots of missile fire and are a chore to destroy in melee!

My PC is still down, awaiting for a new video card and that's slowed me down.  Here's hoping that when it finally arrives, it fixes the problem.  The good thing about being your own IT is saving $.  The bad thing is making an educated guess and discovering you're wrong!
Posted by Monty at 2:41 PM 43 comments:

I worked the Iwo Jima statuette over one last time to reduce the mottled look and make it predominately green. I do think this last push did the trick. 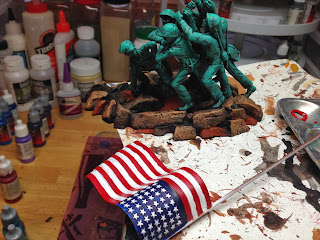 Nancy's call on the flag was spot on. She was quite happy with these pictures so with this, her keepsake is complete. 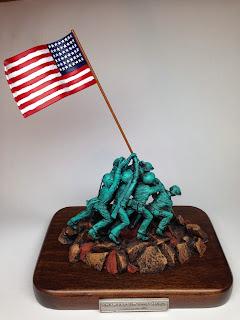 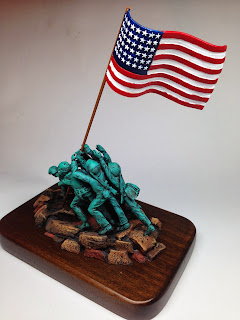 For comparison, here's how it started. 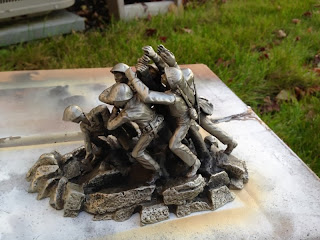 Nancy's dad put his life on hold during the war years.  The end of WW II meant restarting his civilian life. Those postwar years must have been heady times, full of hope and promise.  For Nancy's dad, it meant returning to the US, marrying his sweetheart and settling down to raise a family together. Nancy shared a wonderful engagement picture of her mom and dad. I do think they're the very model of love and optimism! 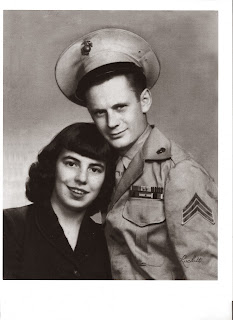