2015 was a banner year, judging by the number I painted for SAGA.  I recently posted up some of my banners in a SAGA Facebook page and received requests for a tutorial.  Far from an expert, I'm happy to share what I've learned so far. 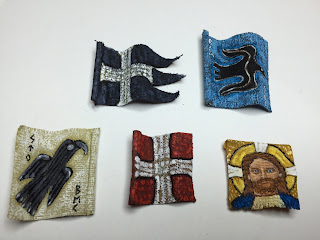 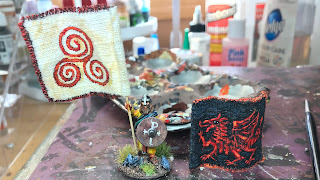 You'll need some linen to start.  I ordered mine on-line but if you have a crafty friend, see if you can get a swatch off them because you don't need much! Start by determining the size and shape of you banner. My infantry banners are generally square, 1- 1/2 " x 1-1/2".  If you want swallow tails or a long tailed cavalry banner, take that into account as you measure and cut.  I start a bit large than what I need and then trim the banner up after testing it on my bannerman.  Unlike paper banners, I don't double the linen over onto itself. By working with a single layer of linen, your banner will be flexible and translucent. When sizing, leave a little extra for rolling up onto the wire (see below).

Once sized and cut, put a long bead of PVC glue at one end of the banner and tightly roll it around the wire it'll be mounted on.  Cover the wire completely and put a bit of weight on it to keep it from unrolling while it dries.  Once dry, give the banner a good pull and slide it off the wire.  The linen will keep a tube shape, allowing you to swap out banners. This is cool because you'll be able to sport either the fabulous LBMS banners or your own creations as the mood strikes you!
Paint the banner in a dark base color. For white banners, I use light green, light brown or gray for my base. Ideally, your base color will peek through at the finish (see below) giving you shadows and contrast. Experiment with this because just like priming miniatures, your base color affects the look of your finished banner.
After the base coat, I use a pencil to sketch out the shapes I need to paint.  I'm not  good at freehand so a little care here prevents headaches and overpainting later.  I use a ruler to ensure everything is symmetrical and balanced.
Next, work up from your base.  I use the triad method, which is a dark base, a mid-tone color and a highlight color to finish.  For white, my base was a light green, my mid tone was pale sand and the highlight was white.
Avoid painting an area so thoroughly that you can't see the base color. Leave some of each color peeking through for contrast. To do this, I paint using the side of my brush with a wetbrush to drybrush technique. Wetbrushing is like drybrushing except that you leave a bit more paint on the brush.  Wetbrush your first coat and then go lighter (drybrush) with each coat. Sometimes, I paint dots for the final highlight and effect.  Ideally, each coat is applied a bit smaller and in a lighter amount than the prior color.  This is "seat of the pants" painting and you should experiment to find the look you like. 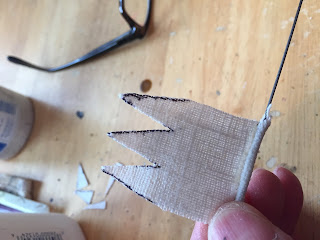 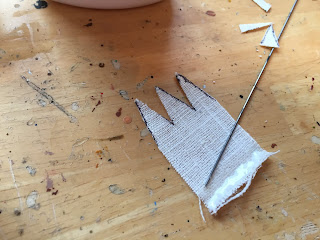 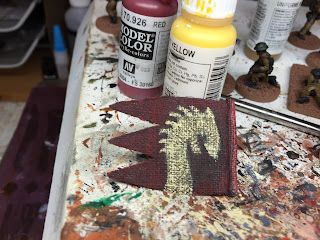 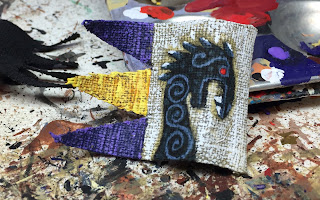 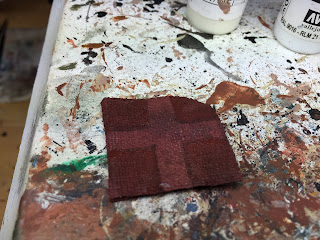 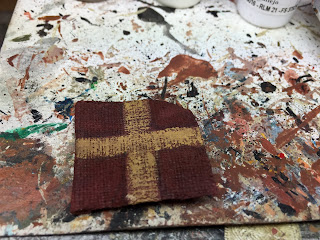 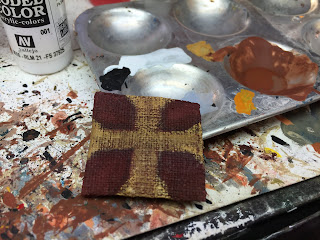 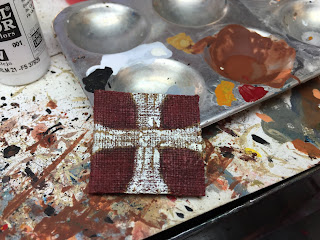 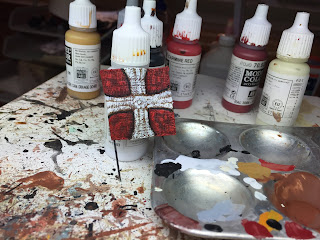 Once finish with the inside, work up the outside areas in the same method.  The dark to light highlights mimic the folds, ripples and shadows in real life on a banner. Your goal is to make the banner look good at 3 feet and not 3 inches.  So while it may look odd close up, hold it at arm's length to see how the effect looks at distance.  I like to "blackline" to make the banner pop.  Below, you can see I used black to create a thin shadow around the white cross for contrast.
Once finished,  the banner will be slightly stiff.  You can press the banner in from both ends to create a slight "S" bend, making it look like it's catching the wind. A reader suggested that you can heat the banner with a hairdryer to make it more flexible and receptive to shaping as well.  I'll try that next time.
Seal it with a matt sealer that'll help protect the paintjob and hold the shape of the banner, and your set!  I'd love feedback and suggestions on this as I've just scratched the surface of this topic.  If you have tips or tricks you're willing to share, please post them! 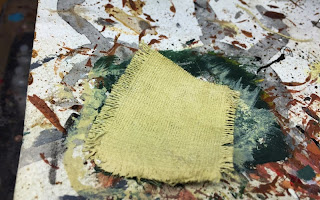 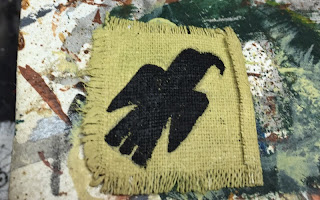 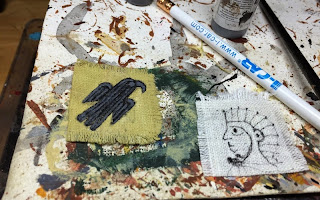 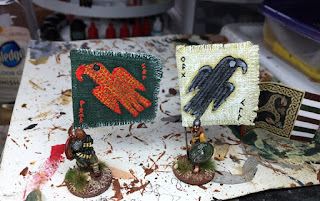 ...and perhaps my warband for the US Grand Melee next year?  We'll soon see! This was an impromptu project that started when we came up a bit short with Arab warbands in our Crescent and Cross campaign.  My friend John gave me a good deal on his unpainted Artizan Design Moors and that was all it took.  If you're considering Dark Age Arabs, have a look at Artizan's line as these are superb.

I used Artizan's Black Guard for my fanatics on foot and the Hasham Guard for my mounted.  In my version of the Mutts, only the hearthguard (fanatics) take the black.  This way, you can quickly pick out my hearthguard in a game. I used bluish grays for cold highlights over black.  I also worked up a couple of linen banners.  While linen is pain to paint,  I do like the textured look of it, frayed and all.

It was a bit tricky to find warriors on camels and I eventually went with Gripping Beast models. Camels are a powerful option in this faction as they cause horse mounted enemies to lose half their dice in melee. Camels can go into uneven terrain and not get fatigued like other mounted. Clever fellows, the camels!  The Mutts can add a Hero of the Crusades, Abdullah ibn Yassin for a point.  He generates 2 SAGA dice, and adds dice each time you sacrifice a model from your warband.  I tried him a couple times and decided he's a keeper.  I painted up mounted and foot versions of both the priest and the warlord. Choices are what make SAGA fun!

I'm happy with how the cow hide shields turned out on these Artizans.

Gripping Beast warriors archers finish out the warband. Even though I'm not a fan of archers in this faction, I think there might be a place for them with a different style of play.

I got a bit carried away painting this bunch as I never settled on a single build.  In the end, I'm pleased with how my first Arabs turned out. The Mutts are a bit tricky to run and I proved it by losing my first 5 games with them. Since then, I've notched 5 consecutive victories. In a melee-centric game, the Mutts can be quite powerful once you get the hang of them. If the Vikings are your current favorites in SAGA, you'll love running the Mutts!