The Sultan Smiles! A Maurice AAR...

Maurice is a big hit in our group, so much so that we're into our 2nd campaign since August.  There are many things to love about the game but the campaign rules are genius. The campaign allows a player to:
The campaign also gives a narrative, energy and game to game results that are absent from a one off match.  Our group is so hooked that we've managed a game every 2-3 weeks.  Being a family man, it's no easy task to sneak out the door for my games.  When my wife pointed out I was gaming two weekends in a row, I replied "but this is a campaign game" and it worked!

I was playing Hugh in this match and by the way, Hugh had never lost a campaign game.  To prepare for my big showdown,  I read the rules cover to cover and filled up a notebook with tips and ideas.  I also got practice games in and brainstormed with my sparring partners.  So, how did my training and  hard work pay out?

The game had a promising start when I won the scouting role and was able to choose to defend.  6 pieces of terrain went down and Hugh made a point to drop his terrain in my deployment zone to mess me up.  The village, marsh and woods cut my deployment zone in half so I shoehorned my army into the right half of the board. 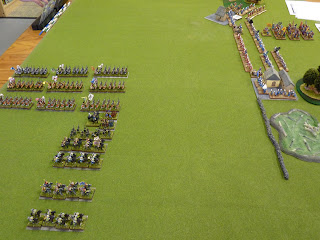 In addition to being a stone cold killer, Hugh has a spectacular Coalition army made up of French and British troops.  A 00 or 000 brush was burned up painting these handsome lads and all of their piping. 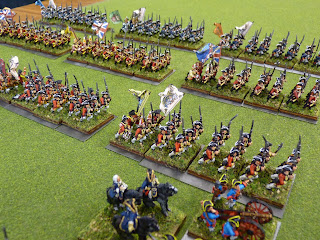 My Ottomans wedged themselves into a double line between the two villages while my cavalry held in reserve.  The boys in red are my Guard units, The Sultan's Own. 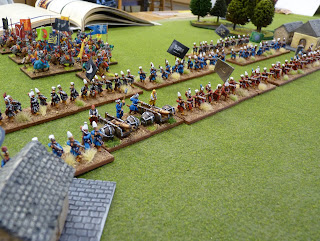 In the early game, Hugh swung his army out in parade formation and formed up just outside of musket range.  I declined to bombard with  my cannons in order to load up on cards.  That turned out to be a wise decision indeed! 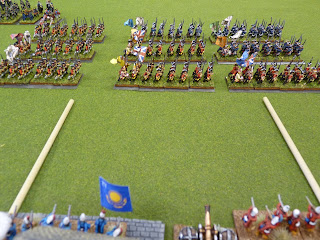 If you're going to knock off the Big Dog, you need some luck and luck was with me in the early game.  I pulled 3 Event cards that I quickly put to use.  First, I played "That's Not on the Map!" to drop a marsh in his line of attack on the village. Then I played "Confusion" to march one of his Guard units out of line and into the marsh in canister range of my cannon.  Then I played "Heat of the Battle" to charge his weakened Guard unit into two units of The Sultan's Own, destroying the flower of his army. 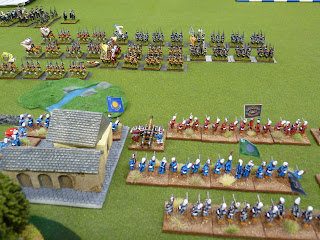 These 3 event cards put Hugh back on his heels.  He pulled his infantry back to reorder and realign.  At this point, I was tempted to come out of my defensive position and try to grab a decisive victory but I resisted. 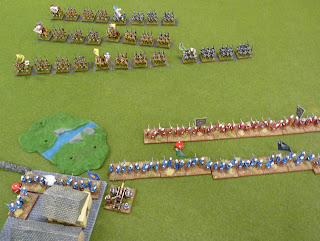 Hugh made a valiant attempt attempt to work my flank but the woods and my reserves on the other side made sure his push came to naught. 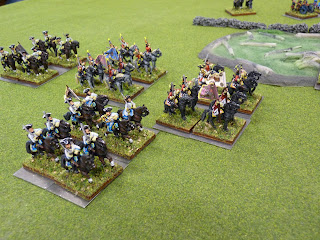 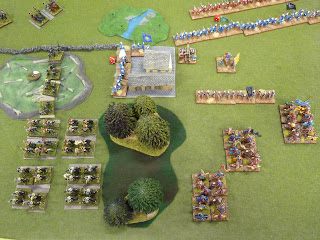 In the spirit of a gentlemen soldier, I offered Hugh terms near the game's end.  In perfect character, Hugh replied sharply that he had no interest in terms but he was willing to accept my surrender!

Night fell and with it came a a minor Ottoman victory with an epic point for the carnage inflicted on the infidels!  Two games into the campaign, the village bells rang to celebrate the amazing fact that Sultan al-Adin is undefeated! !
Posted by Monty at 11:06 PM 29 comments:

36 Knights! - last of the Hungarian heraldry

During the medieval era, armor was sometimes "blackened" in order to protect it from rust.  Blackening consisted of coating the armor with oil and burning it off or boiling the armor in oil until the oil cooked into the steel and then burning off the excess. Armor which is painted or lacquered black gives the same visual and also provides some anti-rust protection as well.

Thanks to a combination of Google and a fellow blogger in Turkey, I found the artwork of Hungarian knights below.  In each instance, the artist chose to show portray Hungarian knights in blackened armor.  It's up to us to guess whether it was painted, lacquered or blackened on!

As I discovered when painting the Royal Banderium, painting black knights in 15mm is a tricky business.  My version consisted of priming the knights black and then painting them with a Vallejo Gunmetal + Black mix.  I then drybrushed lightly with Gunmetal.  I was sorely temped to work up the brightness from there but that would defeat the point of painting black(ish) knights!

Painting heraldry consisted of me clicking through a Hungarian website until I found an icon I could paint.  Then I'd wheel my chair over to the painting table to do paint it, one shield at a time.  Underneath those shields are a few notable failures.  Hats off to you fellows who paint medieval armies and heraldry exclusively!

Once I started basing these up, I discovered that swords and lances covered up the shield of the figures to the right, obscuring a portion of the effort.  Arg!  That would not be a problem with Impetus basing!

All Essex figs.  Commanders and camp to finish this project up and then, it's Saga time!
Posted by Monty at 7:38 AM 44 comments:

The Szeklers were a key component of the Hungarian Black Army, providing them with thousands of lance and archer armed horsemen to defend against the encroaching Ottoman Empire.  These superb horsemen were the perfect foil to the Ottoman Akinjis & Timariot horsemen as both sides could employ shoot and scoot tactics.

Thanks to Google Chrome's translator feature, I was able to find a Hungarian website featuring medieval Szeklers heraldry HERE which were put to use below.

There are a few that didn't turn out well but my rule for painting heraldry is, "if it looks better than a blank shield, move on!"  I did sprinkle in some geometric patters just to keep this from taking all winter.

I primed horse and rider in the horse's base color with Army Painter colored primer.  Then I washed the horse in Devlon Mud and subsequently painted the highlight color onto the horse very neatly, taking care not to slop onto the tack.  That way, I could paint the tack in a highlight color and the shadowing from the Devlon Mud remained intact.  This is much easier than painting the tack in black and then painting a color over the top of the black.  I'll be keeping this trick in my stable!

The number of photos is a bit indulgent but with 48 figures in 4 units of 12, I don't want to rush these fellows out the door. In Field of Glory, 4 units of Superior sword-armed horse archers will be Death in the Saddle.  I can't wait to get them on the table and demonstrate it. Brandt, get rrrready to rrrumble!
Posted by Monty at 8:24 AM 30 comments:

In the Saddle-Hungarian Light Horse

The challenge to painting a Later Hungarian army is that once you've finished your foot troops, you've done the easy part.  The cavalry contingent is 100+ strong with shields, heraldry and knights.  The upside is that Essex horse are a joy to paint, even when you get to  #99.

Hungarian Light Horse: Hungarian light horse is nothing special in the Field of Glory Hungarian army list but it is a mandatory pick.   Much like the Union cavalry at the start of the ACW, I suspect these fellows felt the pangs of being second best as the Szeklers light horse teased or even mocked them.

Szeklers Light Horse:  Armed with bow and sword, these superior horsemen will be hard pressed to find their equal.  They'll generally outclass the enemy light horse.  +5 points for the stylish caps with a feather in them!

I think the sand colored ballast helps the horse shine.  I used 4 or 5 shades of brown with these and the light basing lets the various browns shine through.

Looking back, I keep a running tally of the figures I paint based on troop type, scale and project. In 2012, I painted 1,453 figures in 15mm. To achieve this mark, I've forsaken almost all of my other hobbies and interests for painting. A man can only serve one Master and he calls me loudest from the painting table!

Looking forward, I took the Saga plunge.  A fellow was dumping his Saga projects on Bartertown and I snapped them up.  By my count, it's enough Normans and Vikings to paint up 3 warbands for each side.

Over Christmas break, I started with the plastic GB Vikings.  This is old news for many of you but the Gripping Beast plastic Vikings are fantastic.  Great models, lots of options and a great value with 44 figures costing only $32.

I've limited the color palette and intensity for the first batch of Vikings. I'm going to have to decide whether to use LMBS shield transfers or paint shields from scratch.  I've got 200+ figures to paint so maybe I'll put the time into figures and not shields.  I also grabbed a tin of Army Painter Strong dip.  I've never done AP dip so for one of the warbands, I'll give this a try as well.

The 4Ground Saxon hovel has been reviewed on other blogs but I thought I'd give this excellent product a quick shout out.  The kit is fully assembled in less than 30 minutes!  I'll be getting a few more of these.