As the winner of my 200 follower giveaway, Robert Hingley requested I paint up a Viking warlord. This fellow is a down payment on Robert's first SAGA warband.  SAGA allows up to a 50mm base for warlords, and I put it to use here.  The figures are by Gripping Beast and the banner is a transfer by the always fabulous Little Big Men Studios.  I can hear the warlord shouting "Quote the raven, nevermore, ya buggers!" He may not have said "buggers."  My ability to translate old Norse is a bit spotty but you get the idea.  Here's hoping this stout fellow serves Robert well on the tabletop!

I also went to work fixing my Breton warlord's dappled gray.  The dappling was too small so I applied larger mid gray spots as a base to scale up in lighter and larger gray spots. From 3 feet, this looks much better than my first try. I'm tempted to flatten it out with a wash but I've ruined a round of dappling already with a too dark wash. I  must remember Dean's advice to "paint for effect."  Always good advice!

Over the weekend, I stopped by the North Star Tournament.  North Star is a superbly run and attended Warhammer event.  This link takes you to their Facebook page with pictures of  37 gorgeous themed tables and spectacular fantasy armies. I recognized many of the players from SAGA Storm and everyone I spoke to was having a blast. 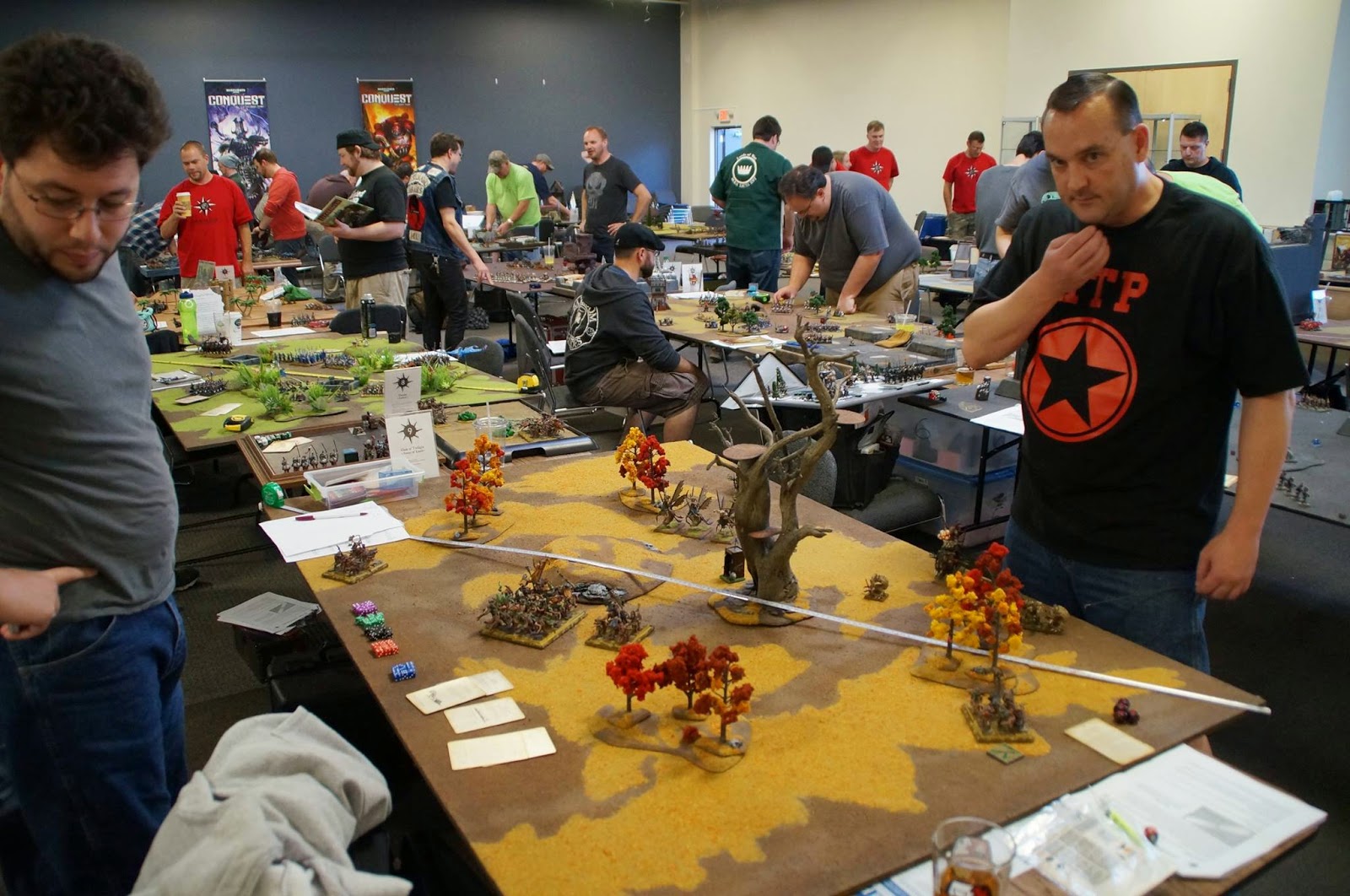 I'm sorely tempted to paint up a WH fantasy army and join the fun next year. Those of you who've been down this road know Warhammer is not an easy lift when it comes to the  rules, buying armies and painting.  My gaming plate is full so I'd have to push something off to add this project.  Stay tune.  If I make the crossover, it will be impossible to miss.
Posted by Monty at 2:46 PM 43 comments:

The streets of Laredo

With all my SAGA gaming and painting, I got a bit distracted from my Dead Man's Hand work. Here are some lovely bits of Old West color for the finish line.  First is another great kit by 4Ground. Is there anything their lasers can't do? I don't think so.

The roof opens up so you can put passengers inside.  I did not glue the passengers in as the interior is quite dark and my customer might use them for tabletop color.

These characters are for the 4Ground Gallows.  They're suitable for planned or impromptu Old West hangings. Poor cowboy, where did you go wrong? Don't tell me, you fought the law and the law won.

In DMH, you can't have too many casualty figures.  These prone cowboys went West for the gold and stayed for the whiskey and women.  Looks like that didn't work out for them.

This pair is the DMH Rogues Gallery.  I went for a Rooster Cogburn look for one, and a buckskin suit for his Winchester-wielding partner.

The only thing more fun than painting Old West is playing Old West and I've gotten in plenty of games lately.  I do believe DMH its the most fun you can have on a tabletop with your boots on. With all the rules I play, that's high praise!

Let's exit to The Clash's "I Fought the Law and the Law Won."  Brilliant live performance!

Cuts You Up - Dacian vs. Roman AAR

I finally got my Dacians on the table against their mortal enemy, the Romans [insert "boo" and/or "hiss" here]. I painted them specifically to counter the many Roman armies I face in our Field of Glory group.  Now comes the test-will the Dacians beat the Romans and become my new favorites? Or will they suffer the fate of my other "barbarian" armies and get stomped?  No pressure boys, win or go to eBay!

My friend Mark brought his Romans down for the test. Setup saw a village (by Lurkio) split his deployment in two. The Roman army is mostly drilled superior troops in armor, small but tough as boots! Being average and unarmored for the most part, the Dacians were nearly twice as numerous as the Romans. This was a classic Roman quality versus Dacian quantity match-up.

Dacians have a couple of good plays in their army.  The first is their Sarmatian cavalry, some of the best in this era.  The second is their superior falxmen, wielding two-handed swords. In melee, the falx neutralizes the Roman armor bonus and their superior rating means falxmen can stand toe to toe in combat.

My left wing was made up of falxmen and Sarmatians.  My right wing was rubbish javelinmen supported by archers.  Sarmatians lurked on the right wing too, looking for an opportunity to bolster or get stuck in.

Mark let my barbarians come to him as he looked for opportunities to get my army out of alignment. I sent both wings straight at the Romans.  Mark was concerned about my column of skirmishers heading for his camp so he moved to cut them off.  The skirmishers responded by veering into the village, where their movement was reduced.

A fierce charge by my falxmen locked up our lines and I threw both of my generals in front. With overlaps, superior falxmen and leaders, the Dacians bled out the Roman Lanciarii and auxillary. The Roman cavalry withdrew in the face of my Sarmatians, javelins and falxmen.  Soon, it was just the legionnaires staring down my bloodied falxmen. Roman cries of "Put on a shirt!" and "No shirts, no service!" could be heard up and down their line.  My falxmen yelled back "You're luck we're wearing pants!" and "You should see the Galatians behind us!"

On my right flank, I advanced at full speed.  The birds were singing, and my Dacians too. We had twice as many warriors as the Romans.  What could possibly go wrong?  Well, everything! Fighting a legion straight up is tough.  Fighting a legion backed by archers turned out to be impossible for my lads. My Dacian javelinmen didn't just lose in impact, they lost in spectacular fashion.  In Field of Glory, combat is generally a grind with units slowly cycling down to broken.  I suffered a double drop in morale in impact. I lost the ensuing melee and both units routed in a single turn!  All was not lost.  By running, I managed to get a nice shot of the Dacian shieldwork as they ran back towards me. Well done, that!

Insult to injury, Mark skillfully used his skirmisher to drag my Sarmatian cavalry into rough terrain and out of the game.  Well played by Mark and poorly played by me.

Back to the left flank, a unit of falxmen charged and defeated the Roman cavalry in a straight up fight.  This time it was Mark who suffered a double drop in morale and the loss of his cavalry cleared out the only unit supporting his legion's right flank.  My falxmen charged into the legion, shedding bases in impact.  Both sides locked up in a multiturn melee that went on and on. And on.

Just as the legion got the upper hand by routing half my falxmen, the Sarmatians got in a flank charge that broke the legion.  I then sacked the Roman fortified camp with a roll of 6.  With that, the Romans hit their break point and retired from the field.  Victory Dacia!

It was a close run thing.  My right flank crumbled in one turn and my archers were going to get rolled by Mark's fresh legion.  My camp was completely undefended with the collapse of my right flank. Another turn and the Romans would've had the win.  The Sarmatian charge saved the day for the Dacians.  I must remember to hold my javelinmen back in future games as they're simply too brittle to go toe to toe. Maybe I'll put them on a hill, in a fort or hide them away for the game.  The falxmen are as tough as I'd hoped.  They're down to the Romans in the impact phase but fight even in melee. With numbers and a general up front, they look like a match for the legionnaires.

To celebrate my rare victory over Roma, here's Peter Murphy's paean to Dacian falxmen, "Cuts you Up."

In the 4th century, Bretons serving in the Roman army were posted out of Britannia and into Amorica (Brittany). To escape Anglo-Saxon and Scoti invaders, a second wave of Breton settlers followed. Charlemagne subjugated the Bretons for a time. A combination of Breton revolts, military victories and devastating Viking raids forced the Franks to eventually concede the independence of Brittany. Somewhere in there, Breton King Morvan fought a personal combat with a Frankish chieftain that left both dead.  I'm not entirely sure how the opposing armies squared that unexpected result.

The 10th century saw a Breton campaign to drive out the Norse who settled on the Loire River. The Bretons and Normans were at war for a time but that didn't stop them from serving in William the Conqueror's left flank at the Battle of Hastings.  Breton history is enough to make your head spin!

In SAGA, Breton levies and mounted troops are javelin armed. Their battle board has 8 shooting abilities and I've been studying to see which stack well before my first game with them. Bretons suffer a -1 to their armor in melee, which means I'll stick to shoot and scoot tactics.

These figures can pull triple duty for me. First, I'll run them in SAGA as a Breton warband. I can also port them into Crescent and the Cross to buff out a Spanish army. Lastly, I can field them in a Hail Caesar Norman army. Portability for the win!

All figures in the warband are by Gripping Beast, topped with LBMS shield transfers painted in.  I'm tempted to paint the hero King Morvan in a chariot. For now, I do like the look of this warlord hunting the battlefield with javelin in hand and no helmet! Those are the kind of risks that men respect.  They're also the kind of risks that get you killed in personal combat.

These figures looked a bit dull at the finish line so I added a 2nd highlight to make them pop. You must look good to feel good and I do hope these javelinmen are feeling good right now.

I painted this warband while listening to Marc Morris' The Norman Conquest audiobook. It's fantastic overview of the conquest of England, and most of SAGA's "Heroes of the Viking Age" make an appearance in the book.  Its a perfect companion piece to SAGA gaming.
Posted by Monty at 5:25 AM 52 comments: