Gall-Gaedhill, the Sons Of Death

The Sons of Death were lawless warriors of Norse & Gael blood, mentioned in the Irish annals of the 9th century. These looters and marauders joined the Vikings in their plundering expeditions. That speaks volumes about them because clearly, you had to be a tough SOB to run with the Vikings!

While you'd never invite these nasty fellows to dinner, you should consider them for your Saga warband.  As mercenaries, they're available to any Saga faction for 2 points.  While pricey, they bring loads of abilities to the table.  Rather than list them and bore the non-SAGA readers, I'll instead point you to the rules for their use at this Studiotomahawk link.  You do have to be a member of the forum to access the .pdf, so keep that in mind.

Once again, these figures were a joy to paint and once again, the Gripping Beast sculptor is killing it in the Dark Ages.  The leaping Norseman with the sword might be my favorite. The baldies pushed me a bit  in getting skin tones right on their chrome domes! I used a touch of gold for sword hilts and bits, given that this lot is all thieves and looters.

One more Saga post-up from this commission and then it's on to Hundred Year War knights by Perry Miniatures.  That will be a treat!
Posted by Monty at 6:02 AM 39 comments:

Angry Monks can be included in any warband in Saga except ones that use Viking dice.  After all, how would it look to have monks fronting a pagan warband?  Unlike other levy troops, Angry Monks have a God's Shepherd's ability which allows them to generate a Saga die.  Martyrdom means each time a Monk is killed during an enemy's turn, the owning player gets to take a Saga dice, roll it and place it on his Battleboard.  They'll make an ideal screening force for non-pagan warbands.

These Gripping Beast figures are the first batch of a new commission. As soon as I got these, I pushed my 15mm projects aside because I couldn't wait to start in.  Loads of character in this crew; two thumbs up to the GB sculptor!

I've been eyeing another Dark Age ruleset, Dux Britanniarum. Two Saga-sized warbands is all you need to run a campaign in the Age of Arthur as a Saxon Lord or a Romano-British Tribune.  In the campaign, you gain fortune and reputation on the battlefield as you fight to defend or conquer the British kingdom. I'm really drawn to the chrome DB adds to what is otherwise a one-off game.  To make the leap, I'll  need to paint up Romano-Brits and Saxons.  I've heard great things about TooFatLardies rules, so I'm really looking forward to giving this a spin! 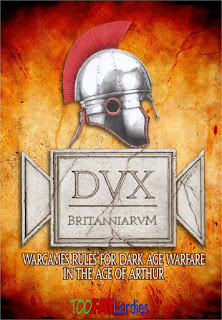 Up next is the last unit for my Norman warband. Because there isn't a single non-shooting ability on the Norman battleboard for foot troops, I wasn't keen on painting these up.  My Saga-savvy friends pointed out that there are scenarios where the Normans need foot warriors to take and hold buildings.  Slow but tough, Flemish Mercenaries might serve a purpose in a Norman warband. Once I figured that out, it was on to the painting table.

Shield colors were carried into a few fashionable helms.  The color-coordinated uniforms are sure to sweep the ladies in waiting off their feet!  Gripping Beast figures with LBMS transfers. The bases still need painting, drybrushing and flocking but all the hard bits are done.

In Saga, Flemish Mercenaries are made up of 8 foot warriors with an armor of 5,  +1 better than other warriors. Their movement is only Short in open terrain due to their equipment and formation. They don't generate Saga dice, which is a big negative. Their abilities include Foreigners, which allows them to activate once a turn for free. Shieldwall means that when they're engaged in melee by an enemy unit or are the target of shooting, the Flemish are considered to be in hard cover.

All in all, they're an interesting option that'll add a new wrinkle to any Norman warband. I'm going to test these fellows to see how it plays out. If nothing else, I do hope they look dashing as they slowly shieldwall their way across the Dark Ages battlefield!

I've been hearing a bit of buzz that about a shortage of sable brushes in the US.  I don't know the truth of it but the idea made me sweat. I use a sable and I never want to go back to working without one.  I went to the excellent Secret Weapons website and bought 2 Raphael Kolinsky Sables, size 0 and a 1 just in case.  In my collection of brushes, the Raphael is my workhorse.  It's durable and most importantly, always keeps a fine point.  Secret Weapons sells many cool products for hobbyists so I'm happy to recommend you check them out and the Raphael brush!

Rally 'round the Raven - Saga AAR

Hugh and I got to set up a Viking vs. Welsh smackdown.  The Viking way in Saga is to go for the jugular whereas the Welsh are shooty, hit-and-run bunch.

I knew I'd have difficulty in this match-up so I decided to try out a new tactic.  In the Raven's Shadow supplement, Saga introduced "Rally Round the Banner."  You can add a War Banner to any one unit.  The banner allows the unit to rest other than the first activation and remove a fatigue.  It's a double-edged sword.   You'll need to use an activation ability or die for the rest.  Activating multiple times in a turn means that unit will use up your Saga dice and find itself alone in the face of the enemy. Also, the banner figure does not generate attack dice.

My Viking warband was Warlord plus 1 unit Hearthguard -12 figs with a War Banner, 3 units of Warriors with 8 figs each.  The risk is that the first time Hugh kills a unit, I'll be down a Saga dice.  It's a quick strike force with a Mike Tyson punch in the form of the hearthguard with the banner.  If my right hook doesn't drop the Welsh quickly, I'll die in a hail of javelins.  Hugh's Welsh warband was Warlord plus 1 unit of Levy -12 figures, 1 unit of Hearthguard-8 figs each, 3 units of Warriors-8 figs each.

GAME 1:  "Clash of Warlords." I won terrain initiative and dropped a hill in the middle of the board. Hugh tried but couldn't get his 2 woods on the table and that spelled trouble for the Welsh.  I've never played a game of Saga with so little terrain.  Could the hand of Odin have been at work?

My warriors screened the hearthguard from javelin fire.  The Welsh javelins were deadly in the early game and I could see I wouldn't have the luxury of waiting for everyone to line up "just so" before going in.

Hugh was forming the dreaded fishhook formation and he intended to bait his hook with my Vikings!

My 6 surviving hearthguard descended on the Welsh warlord.  6 on 1 is not a fair fight and the brave Welsh warlord went down fighting.  A quick victory to the Vikings...skol, Vikings!

GAME 2:  "Clash of Warlords" again with the same warbands.  This time, Odin was off cavorting and the Welsh dropped 2 woods in the middle of the table.  I asked Hugh if he was creating a Dark Age Agincourt. All we needed was a muddy field in the center and a charge.  Being the Vikings, I had no choice but to go up the gut and deliver.

Hugh's dicing was better in this game.  He played "The Rising Out" to activate 4 units to pitch javelins.  My warband was melting in the face of sustained missile fire and I had to go all in with my hearthguard.  I needed to chew through the Welsh hearthguard to open a path to their warlord. When my 12 hearthguard hit Hugh's 8 hearthguard, there was a tremendous crash that ended with his men wiped out and nearly all of mine!  I couldn't deliver the killer punch and was left to look about the battlefield for any chance to pull my coals from the fire!

There is some debate on the Saga forums about the usefulness of "Rally Round the Banner."  After two tries, I'd say it's moderately risky with a moderate opportunity for payout.  If you go for the kill and fail, you've probably lost the game.  Still, I think it's useful tool for the Vikings.

All in all, a great day of gaming and a good showing by the Welsh.
Posted by Monty at 8:56 AM 29 comments:

Bang a gong, I'm done!  With the arrival of the LBMS shield transfers, I finally wrapped up this project. Here's a final post up of the crew. Everybody say "Javelins!"

I'd been eyeing the Welsh for my next warband when my friend Hugh asked if I'd paint his on commission.    With unpaid work days coming down the pike, I'm looking to take on a few commissions.  Instead of moping around the house on my unpaid days, I'll do what I love most and paint!

Advert Alert. If you're interested in a Saga warband and looking for a painter, I could be your man. Ring me up in email (in my profile) and you'll find I offer a bit more for a bit less than the standard 28mm rate.  I can do the same in 15mm as well.
Posted by Monty at 9:04 PM 38 comments:

In Saga, these mounted Welsh warriors will ride into javelin range, throw, and ride away.  Hit and run horse will be very annoying for anyone facing them, I'm sure.  It will be extra annoying for warbands that don't have mounted  forces.

The Gripping Beast Welsh ponies are adorable.  I liked them enough that I read up on the breed.  The Welsh Mountain Pony predates the arrival of the Romans. They were a hardy breed on account of the harsh climate, limited shelter and sparse food. The ponies are able to thrive on minimal forage. The breed has a small head with large eyes, sloped shoulders, short back and strong hindquarters.  They're known for stamina, soundness, and intelligence.  Other horse breeds might mock the Mountain Pony for their appearance but for the fact that the Welsh are their intellectual superior.

Welsh mounted warriors with shield transfers by LBMS.  You may notice, the Welsh do love their capes!

And if that isn't enough horseflesh for you, how about the Welsh hearthguard?