Lately, I've been digging into a pile of Punic era figures to finish a long-stalled Field of Glory project.  I sold my Mid Republican Roman army last winter and in the process, I cannibalized my Carthaginian to build out the Romans.  I planned to paint up replacement battlegroups but then along came a gladiator project, 3 Impetus armies and my Maurice Ottoman army.  After 8 months delay, here are the replacements!  All Old Glory figure.

Numidian Light Horse:  My Carthaginian cavalry is generally outclassed or ignored in my matches so I'm going to try a different approach.  I'll max out on Numidian Light Horse (3 battlegroup) and take a Numidian ally which  allows a 4th BG.  That  should be enough to tie up enemy cavalry while sending one unit after the camp. Colors are variations on a brown theme but I do like the look of these fellows all massed up.  This time through, I deduced that the small blob at the bottom of some shields is a feather! 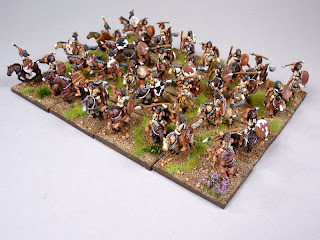 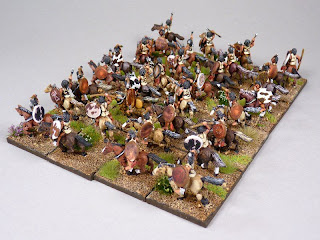 Cretan Archers:  I trimmed the red tunics with white but it had a Santa's elves meets Candy Stripers vibe.  I switched to sky blue but a darker blue would've worked as well. 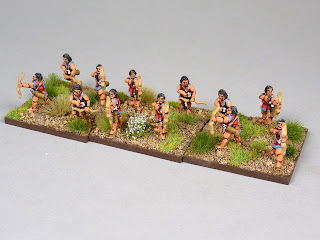 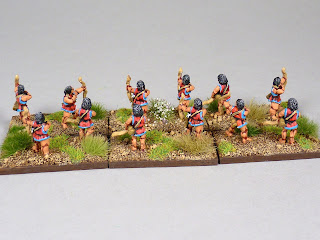 Stompies!  The upside to painting figures a second time is the opportunity to change things up. I've been doing a bit of reading (a dangerous thing!) and learned that war towers were not used in the 1st Punic War.  In the 2nd Punic War, war towers were used BUT not on every elephant.  In fact, there is a line of thought that war towers were used infrequently.  This batch will be sans towers.  After filing away the ropes, I decided to use Green Stuff to make large tusks on 2 of the ellies.  You wouldn't think this would be diifficult but in fact, its quite fiddly in 15mm.  Oh, and I added a crash helmet for one of the mahouts. 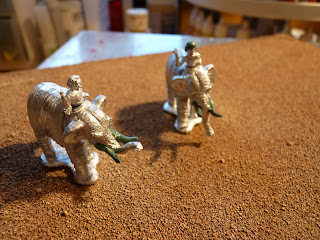 Thureophoroi: A unit of Thureophoroi is sitting in the painting pan. These guys will be tough to paint after the Xyston Thureophoroi I painted for my Pontic army. Even by Old Glory standards, these are poor molds.  Which begs the question, when did I cross over and become a painting prima donna?

I recently took a look at my terrain collection and realized I need to buff up my choices for Maurice. I made a trip to a big box hardware store and bought a 4' by 2' board of mdf (aka hardboard).  I'd been buying it from a local Blicks art store and paying dearly for it.  The cheaper stuff works just as well as the high priced product so unless you're loaded, grab your mdf from a hardware store.  The only downside is I don't have a table saw and it's a bit of work to chop up a large sheet with a circular saw. Going into this, I had 3 goals for my terrain:

1.  It must look better than a piece of felt.  Some people shoot for the stars.  I aim for the ground because I can hardly miss!

2.  It must be light.  Since I rarely host a game in my house, I have to drag my 6' x4' canvass terrain mat, a box full of terrain and my armies on the road.  It's quite a load and the more terrain I make, the heavier my terrain box becomes.  So this time, I'm not putting loads of water putty onto the mdf.

3.  It must be versatile.  My current collection of terrain was bought or made for Field of Glory.  The terrain I'm making here is for Maurice.  As time goes by, there'll be more rules and systems to play so ideally, I want this to work under multiple rulesets.


First up was a marsh. You're thinking that right away, I violated Rule #3.  It's hard to pretend a marsh is anything other than a marsh but I made so it's sized to work under both Maurice and Field of Glory (if I push all 3 pieces together).

I mixed up a thick batch of water putty, smeared it on the mdf and dropped bark in to give it visual interest.  Then I covered it with a dark brown basecoat with dark green in the low spots where the  Woodland Scenics Water Effects will go. After it dried, I put a wash of diluted brown ink over it to muddy up the water.  Then some flocking and I've got marshes.

I've been thinking of painting up a 2nd Maurice army to serve as a loaner for my friends who game only Ancients.  I'm thinking this might tempt them to game in the Era of Gentlemen and Philosophers, even though these fellows can hardly be mistaken for gentlemen.They're hard-pressed to put on a pair of pants before venturing into public, such is their love for the Gauls. Coarse as they are, my ancients-loving friends might one day be persuaded to serve as bayonet holders for my Ottoman army.

As I was looking at the options for Seven Years War armies, it dawned on me that I'd never painted a tricorn hat.  And wasn't that #22 on my bucket list?  Good lord, time to stop procrastinating and get my lace on! My friend Mark was working on his British-inspired ImagiNation army so I asked if he had any units I could train on, er, paint up.  As luck would have it, he had a dandy SYW British Dragoon unit in the wings. 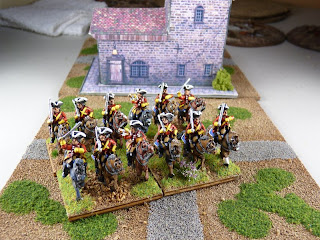 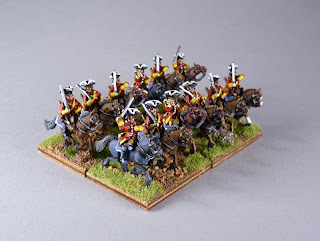 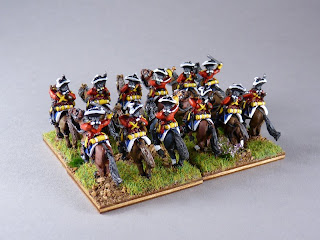 These Old Glory figs are crisp and loaded of detail. To my surprise, I discovered that each Dragoon carried more gear into battle than paratroopers took into Normandy.  A brace of pistols, a musket, a sword, three separate ammo packs and a bed roll.  They were Death on Hooves. If I do paint up a SYW  army, I'll be ordering it from OG.

Next week, I'll try to turn this mdf board into terrain for Maurice. 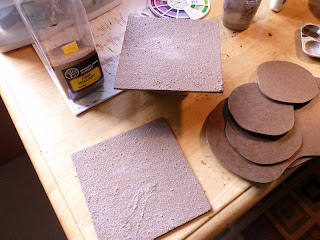 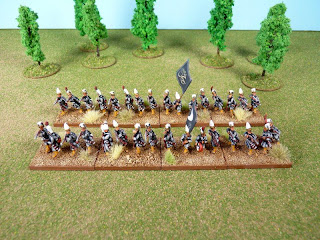 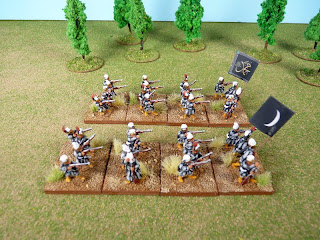 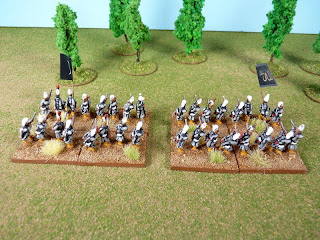 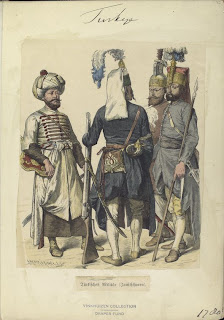 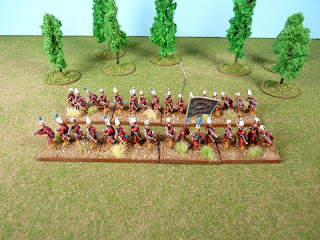 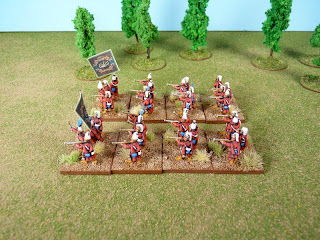 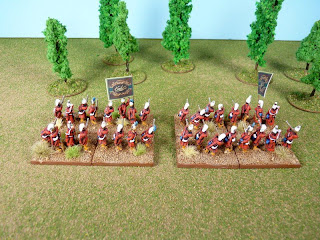 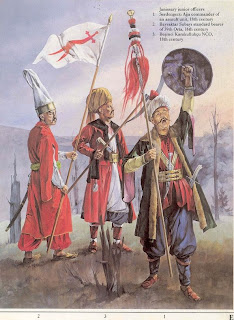 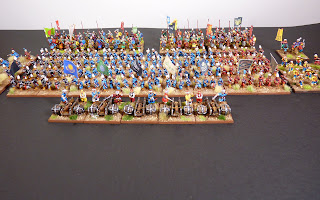 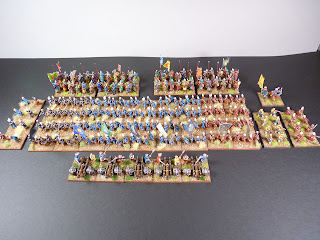 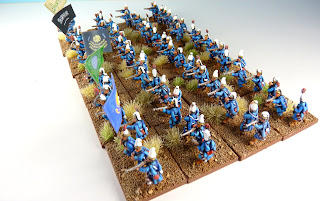 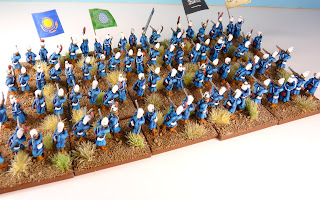 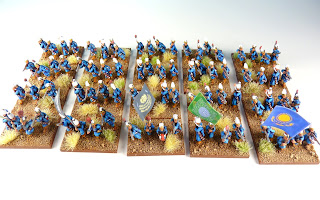