Hugh and I started a Dux Britanniarum (DB) campaign last year.  The campaign had a nice symmetry, with my Britons and his Anglo-Saxons alternating as victors.  The end came unexpectedly when the Saxon warlord failed to make a tribute payment to his king at year's end.  Displeased, the King declared Hugh an outlaw.

Hugh reveled in his outlaw status but it came with a catch.  He faced a "must win" battle to regain the King's favor. Losing meant his warband would melt away and the end of the campaign.  Our final battle started with the Saxons catching my Britons fording a river. Rallying from a bad start, I enjoying a run of luck that sent the Saxons packing.

Hugh lived out his days as a fugitive, despised by all. I was hoisted onto the shoulders of my victorious Britons for a celebration we hoped might last until the end of days.  Then came reports of new raiders at our shores. Proving that trouble comes in threes, the Irish, Scotti and Picts are raiding our fine lands. I'm getting the (war) band back together to send our enemies off.

Up today is a Pict Lord and his chariot for the DB raiders expansion.  The chariot is tricked out with 6 severed heads and another to spare. Apparently, 6 heads just wouldn't do for this Pict Lord. 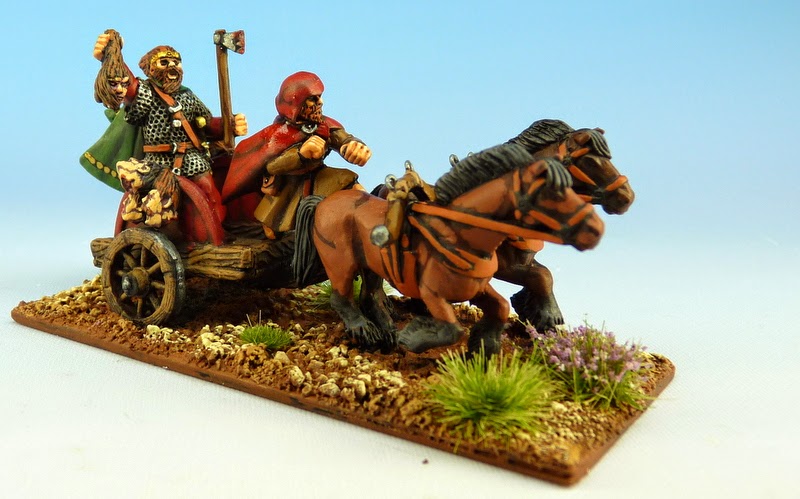 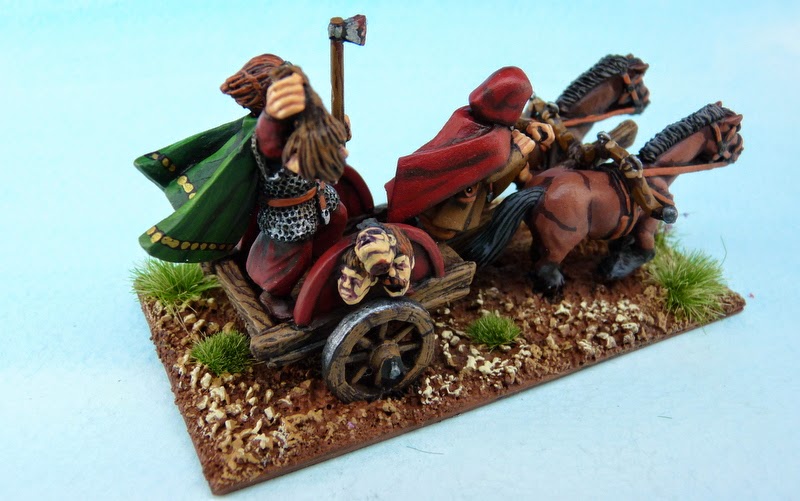 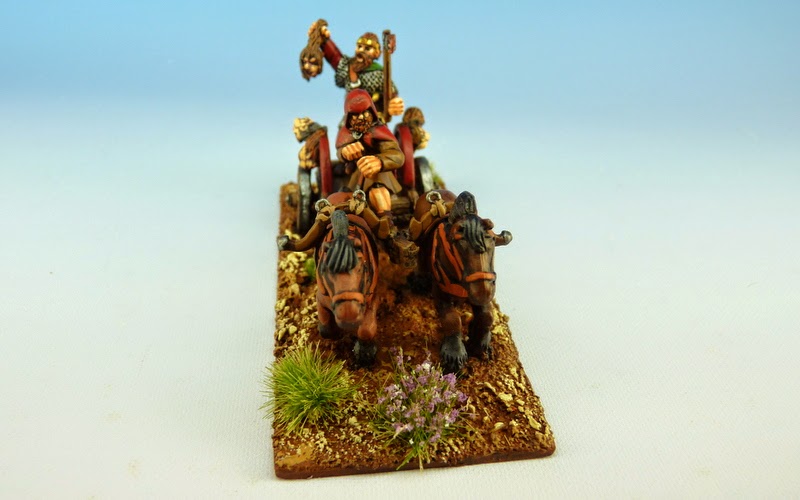 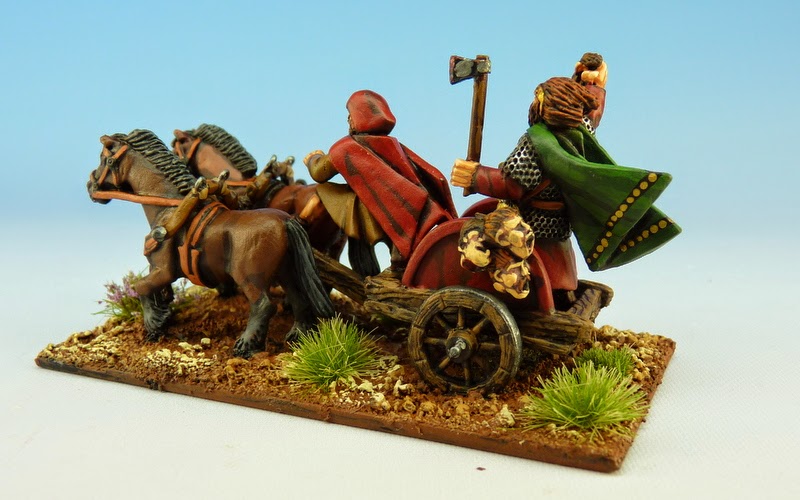 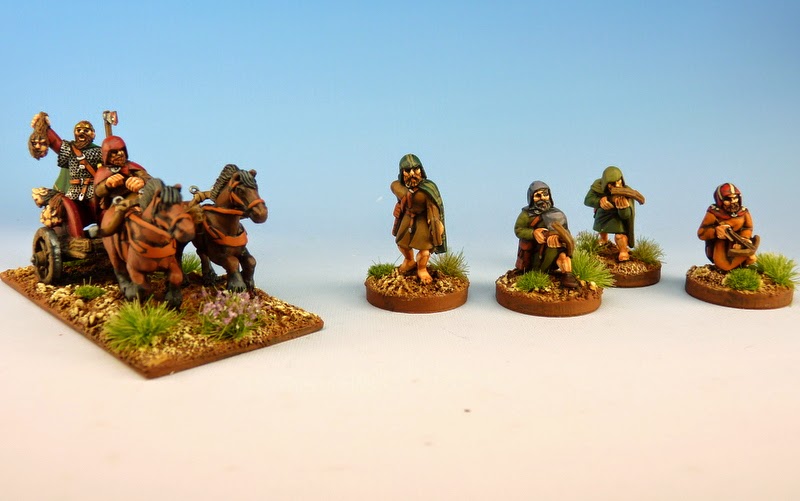 I also painted up missile troops for both sides to buff out our DB forces.  The fellows in cloaks double as Picts or Scoti, and the rest art Britons.  All figures are Gripping Beast, including the chariot. 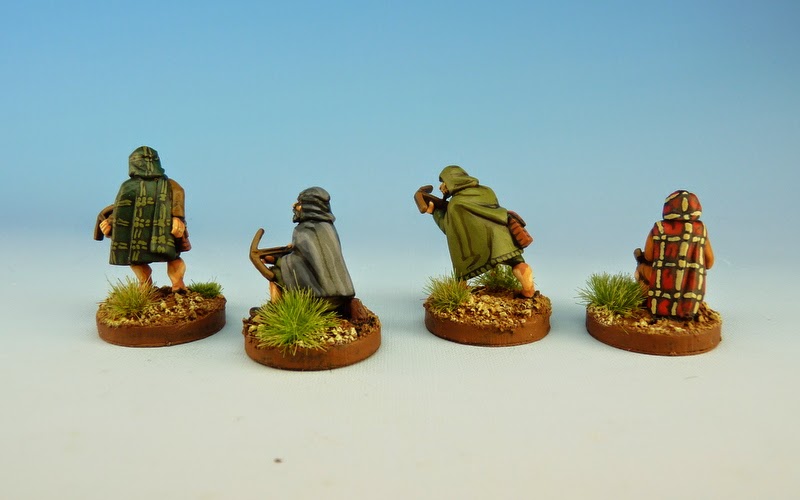 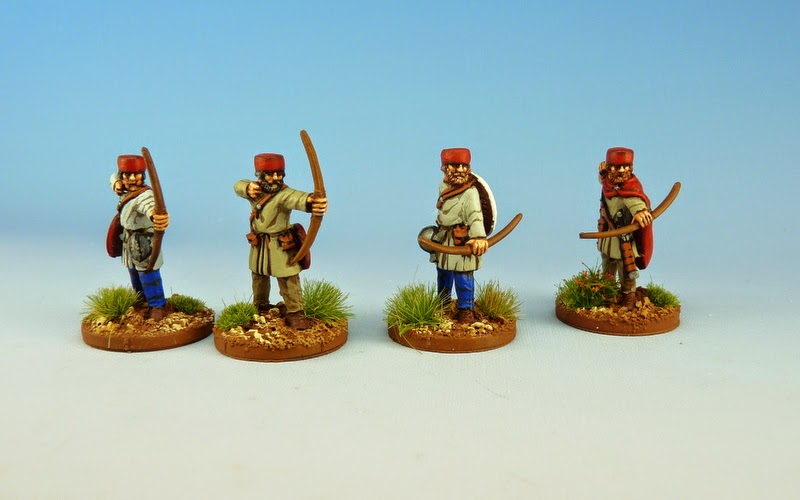 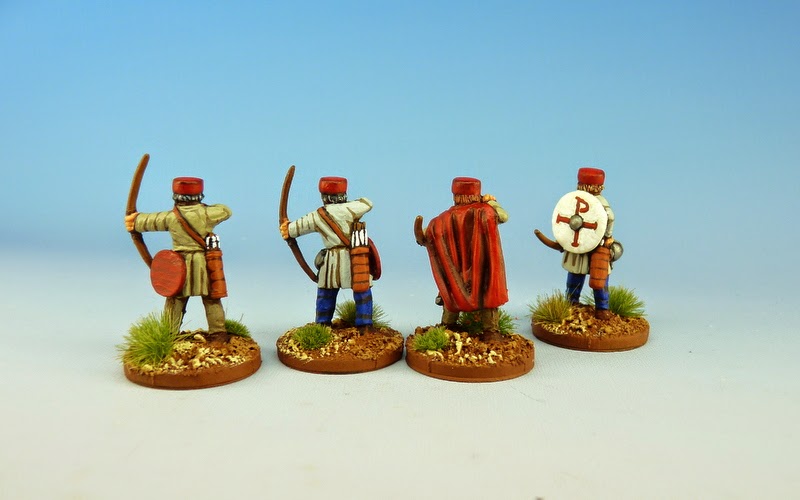 I'm really looking forward to a new DB campaign.  I love the RPG-like Big Man elements built into the campaign, and the way the IGO UGO turn is busted up with cards activating each unit on the table, and influencing events. The only thing I'm not looking forward to is the new Pict lord trying to collect another head for his chariot.
Posted by Monty at 7:57 AM 41 comments:

Hammer of the Gods - SAGA AAR

Thursday, I capped off a bad day of work with a great night of gaming. Eric Hagen was looking to run his Vikings warband.  I was looking to meet Eric and see his new battleboard in person. As evidenced by his brushwork and board, Eric is a rare talent. He's also a stand up gamer and Vikingologist to boot!

We played a modified Homeland scenario.  My Normans had to keep the Vikings out of our hovels by game's end (turn 6).  The dragon's head prows and angry warriors strongly suggested our Viking guests weren't here for trade.

Moving first, Eric spotted the chewy middle of my deployment. Norman archers are good shooters but poor in melee.  Side by side, the Vikings went into them with a warlord and hearthguard. Stacking dice and abilities, they blew the archers out of the starting block. Decimated, they never fired a shot in the game.
I opened with 2 rounds of shooting with my crossbowmen hiding in a hovel.  Having no luck with that, I charged my mounted Norman warriors with a stacked battleboard.  It paid no dividends and the Normans bounced off the Viking shieldwall.  The survivors were hunted down, pulled from their horses and killed by the Vikings in their next turn.
Down SAGA dice and figures early in the game, I used my mobility to concentrate on Eric's right flank. I had some success, taking out Viking warriors and hearthguard.  Up in SAGA dice, I was feeling better about my chances.

Eric wasn't idle while my Normans swept his longboats.  He double moved warriors into a Norman hovel and sent his berserkers to cover the entrance. And here I thought I'd barred the door!  I rallied my surviving figures for a late push to kick the Vikings out.

The berserkers saw the party and crashed it with predictably bloody results.  The Norman warlord needed only a Plus One invitation for the push on the hovel!

While the Norman warband underperformed much of the night, my warlord was a killing machine. Even with his hot hand and sword, it was going to be tough to root Viking warriors out of a building.

On the last turn, my Norman charge came up short and the Vikings notched a win. It was a heck of a game and I'm looking forward to many more. Eric's account of the match is up on his Google + account here.  He's got loads of lovely painting and armies posted, so do check it out!

Up today is a British Airborne section.  There's lots of character in these Artizan Design figs. They were a pleasure to paint from start to finish.  They'll reinforce a Chain of Command commission I painted earlier this year.

I also finished a couple of drivers. In time, they'll be promoted from driving bottle caps to jeeps!

Since I was on a WW II painting kick, I pulled out my Chain of Command jump off markers and painted them up as well.  The resins from TooFatLardies take paint quite nice. I don't have any WW II troops of my own so this is putting the cart, er, barrel,  before the horse.  I'll post these up for sale rather leave them in a drawer while I mull over my WW II painting options.

At the risk of inducing whiplash in my readers, I'm jumping back in time for Dark Age painting and then comes a large run of Old West!
Posted by Monty at 7:30 AM 38 comments: