I knew painting Samurai would be difficult but I underestimated just how painful it would be. There's lots of detail packed on each figure, with kit overlapping kit and everything bunched up.  I love the process of bringing a figure to life but for these, I was quite unhappy until I got to the finish line.  I'll attribute that to painting outside of my comfort zone. 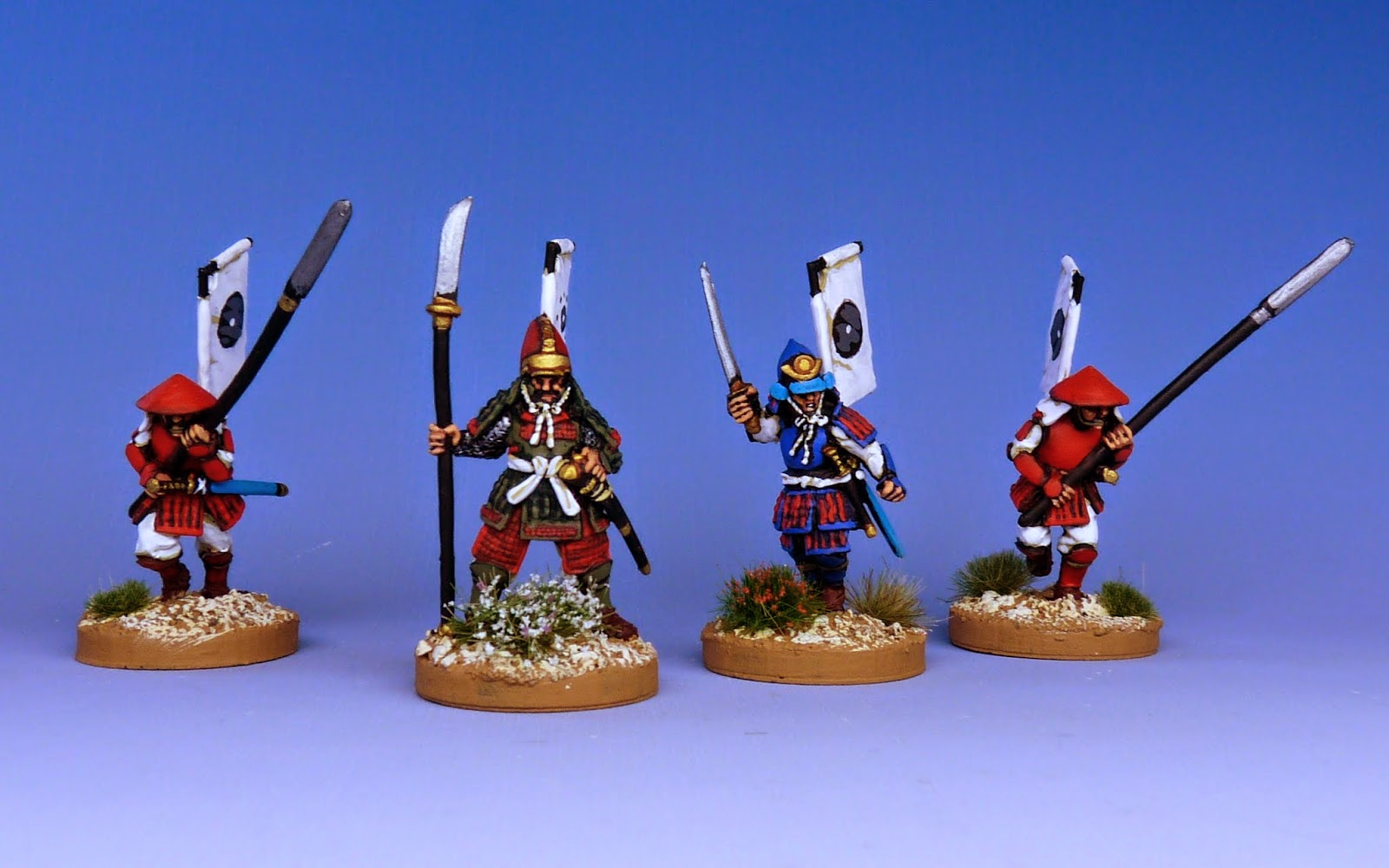 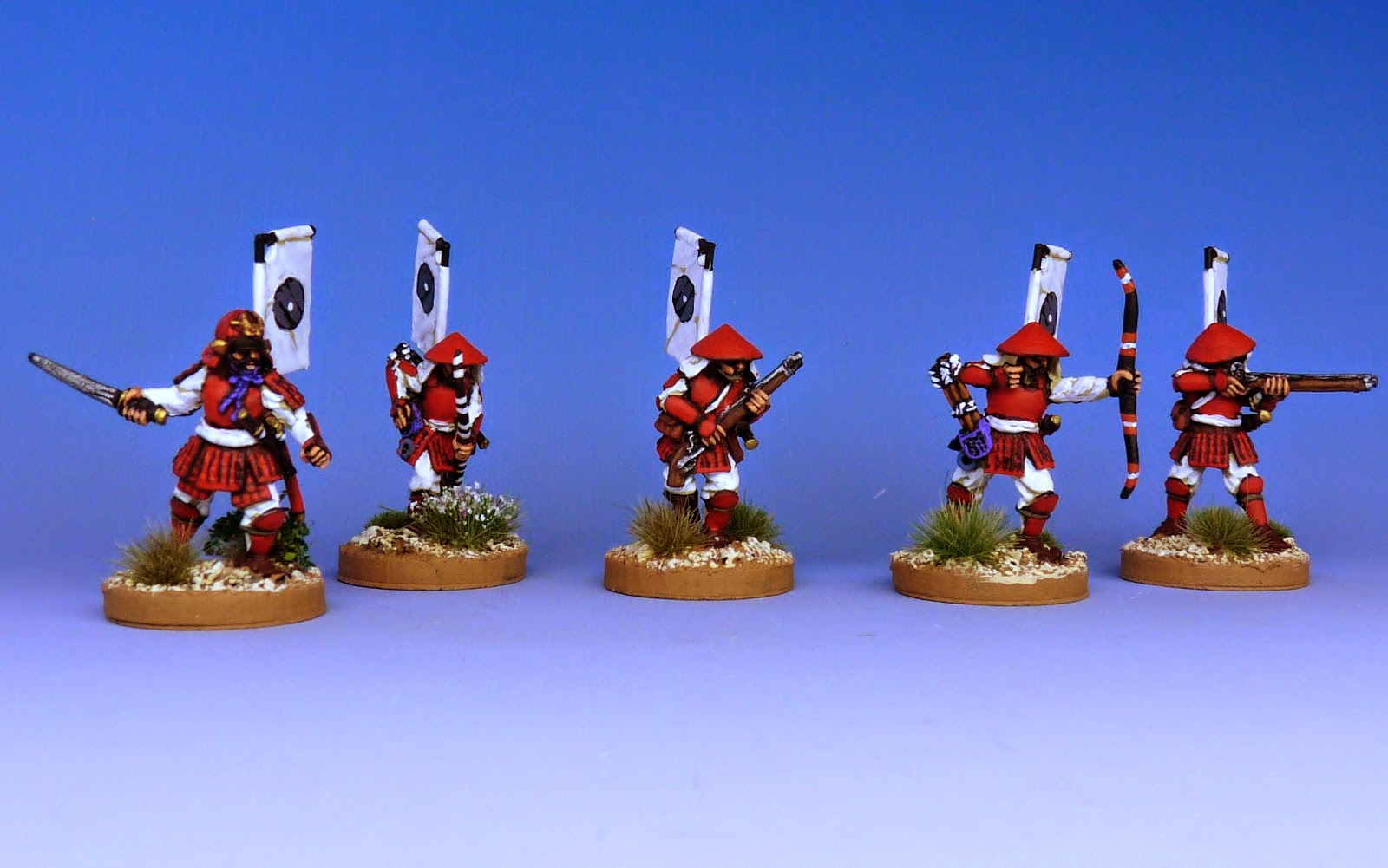 I don't have much in my library for reference material on Samurai but I did I find a fantastic heraldry website here.  The fellow who does the artwork is a genius and you can't help but be inspired by his work. If I were to paint another, I'd like to paint the clan who featured a giant red radish on their sashimono. 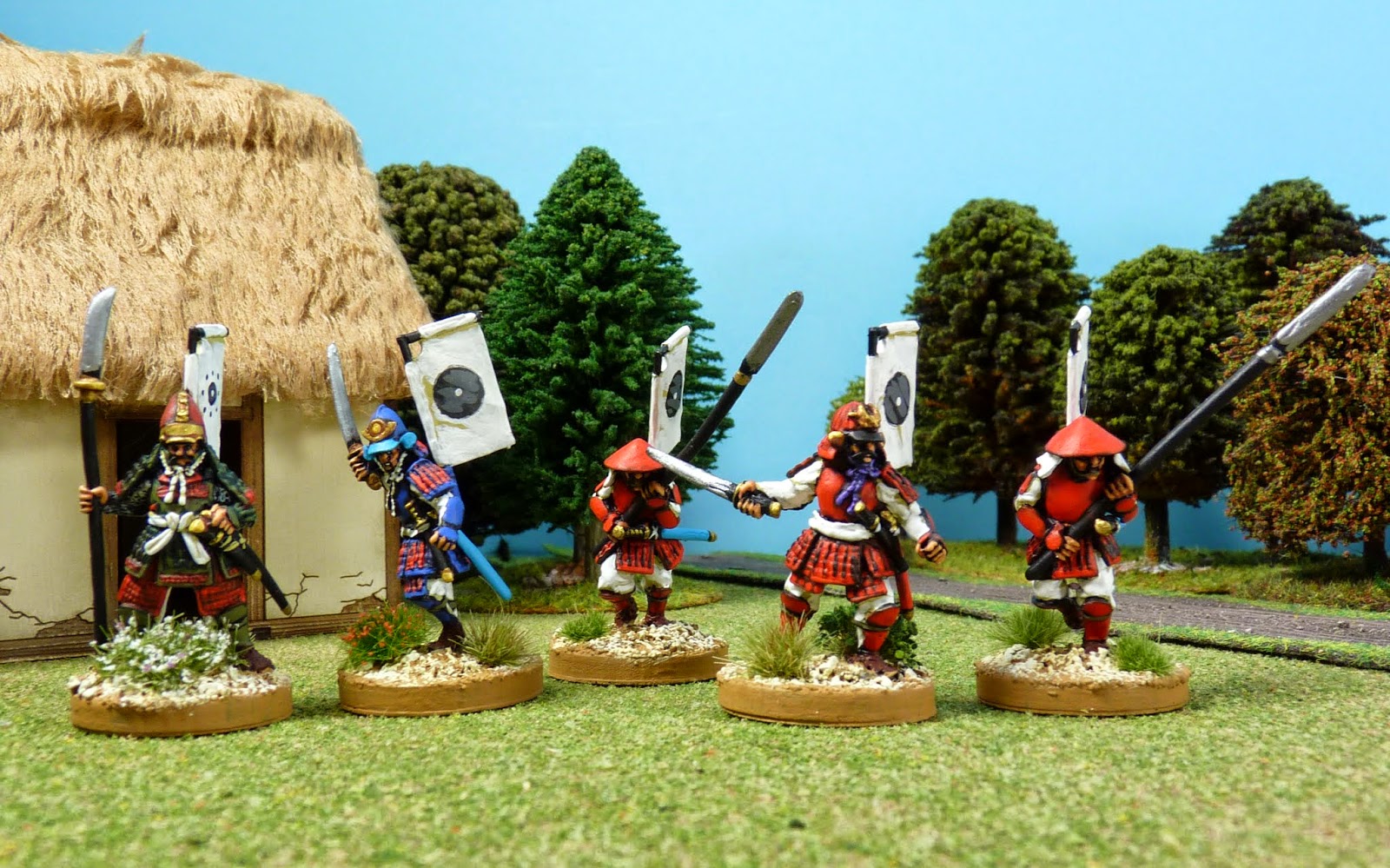 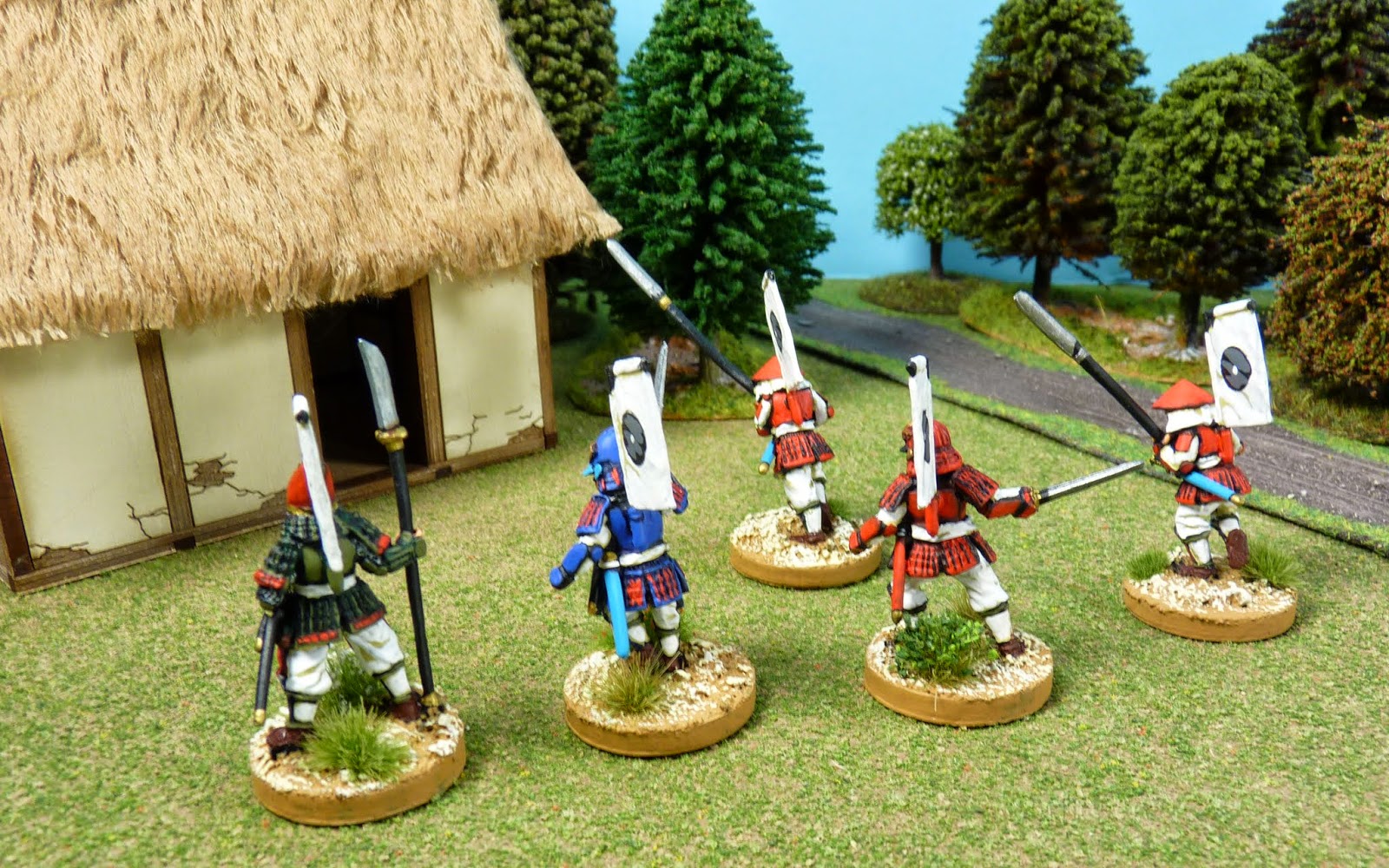 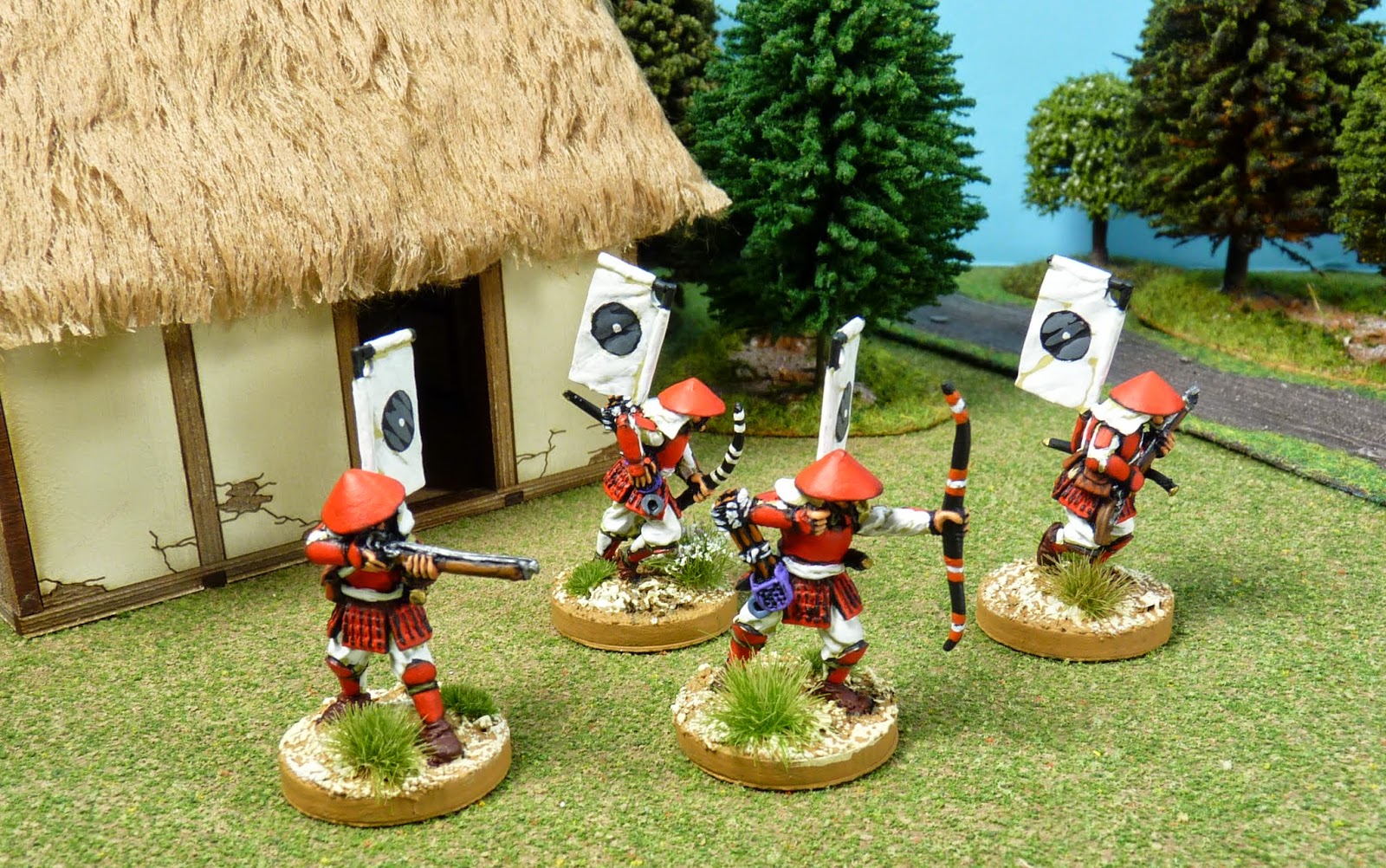 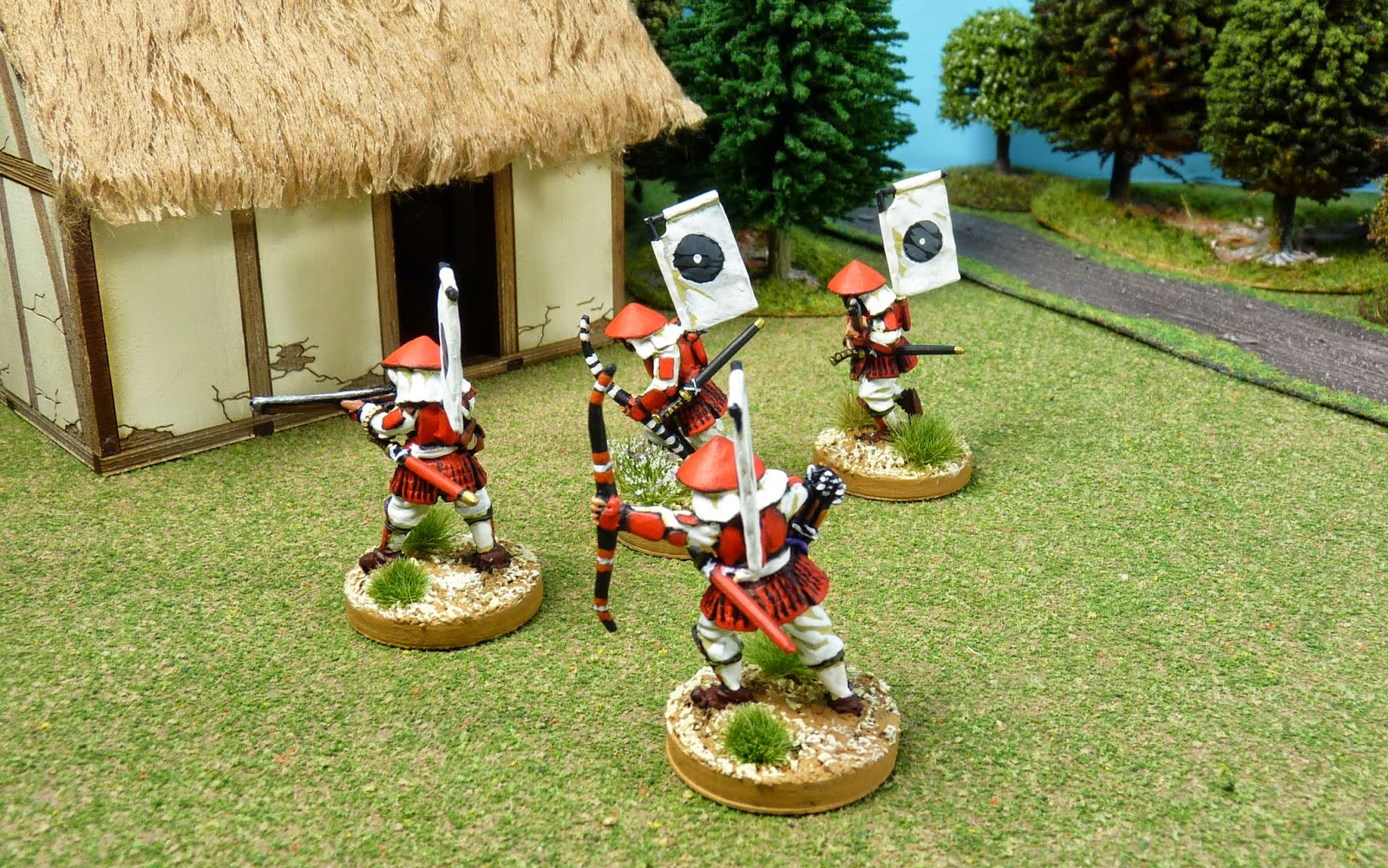 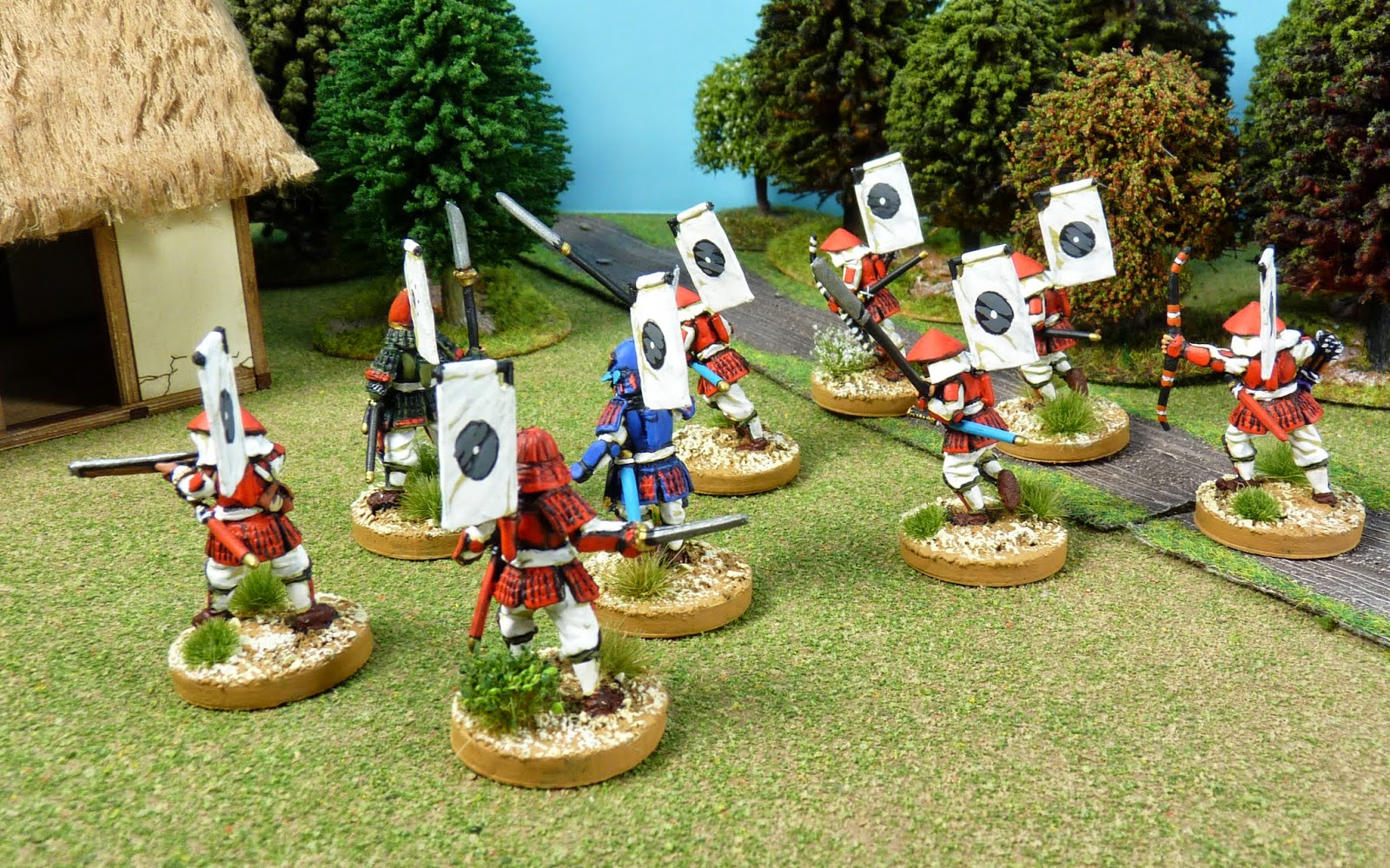 No washes were used except on metals. I tried to paint neat to keep black intact for shadow but there was simply too much going on. At the finish line, I had to double back and add some blacklining.

I worked up the bright red in thin coats, starting at the high points and dragging paint to the edges while trying to leave a bit of the darker base coat peeking through at the edges for shadow. 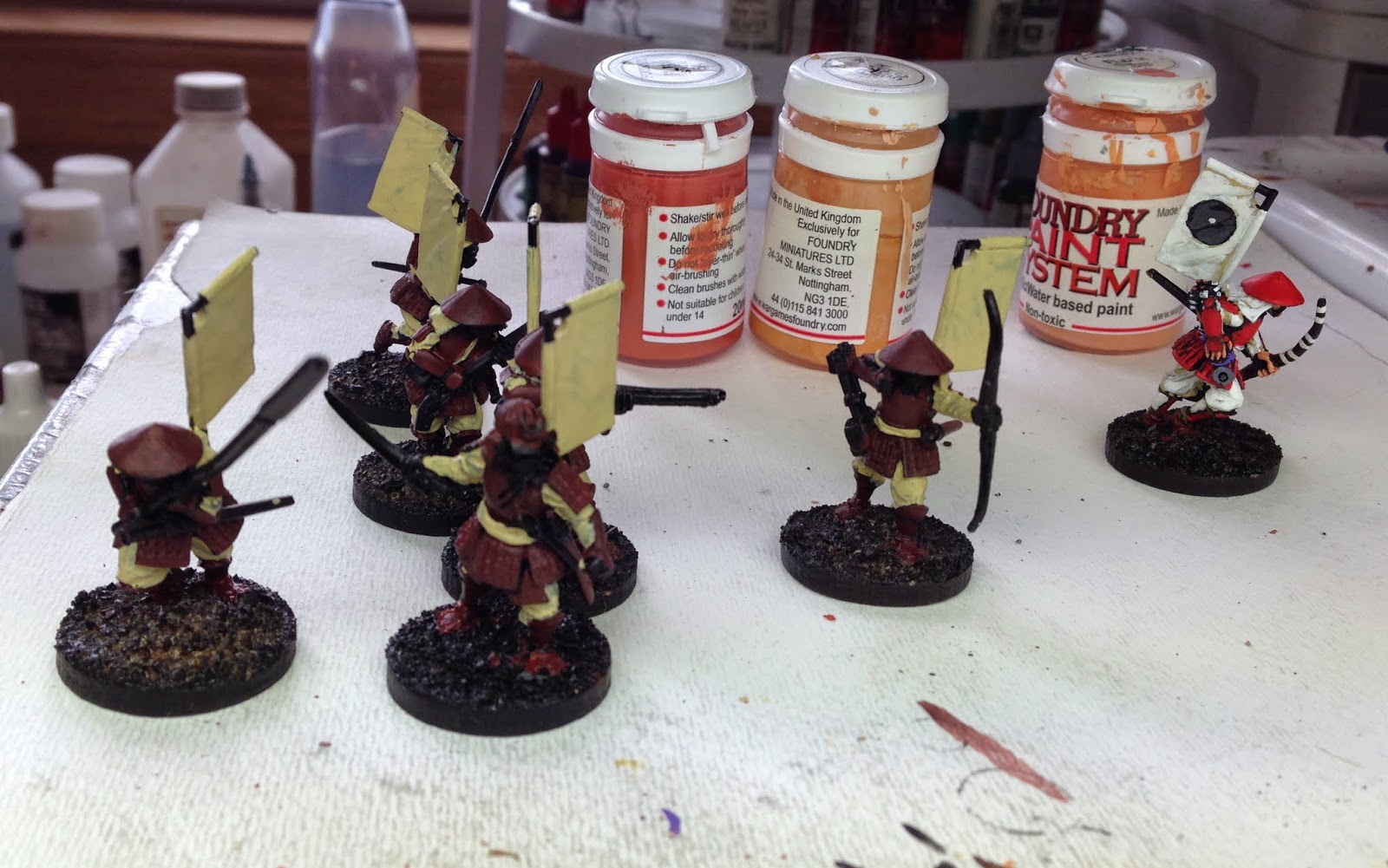 My cheat for painting a circle on the sashimono was a thin bit of plastic punched with a 3 hole punch. 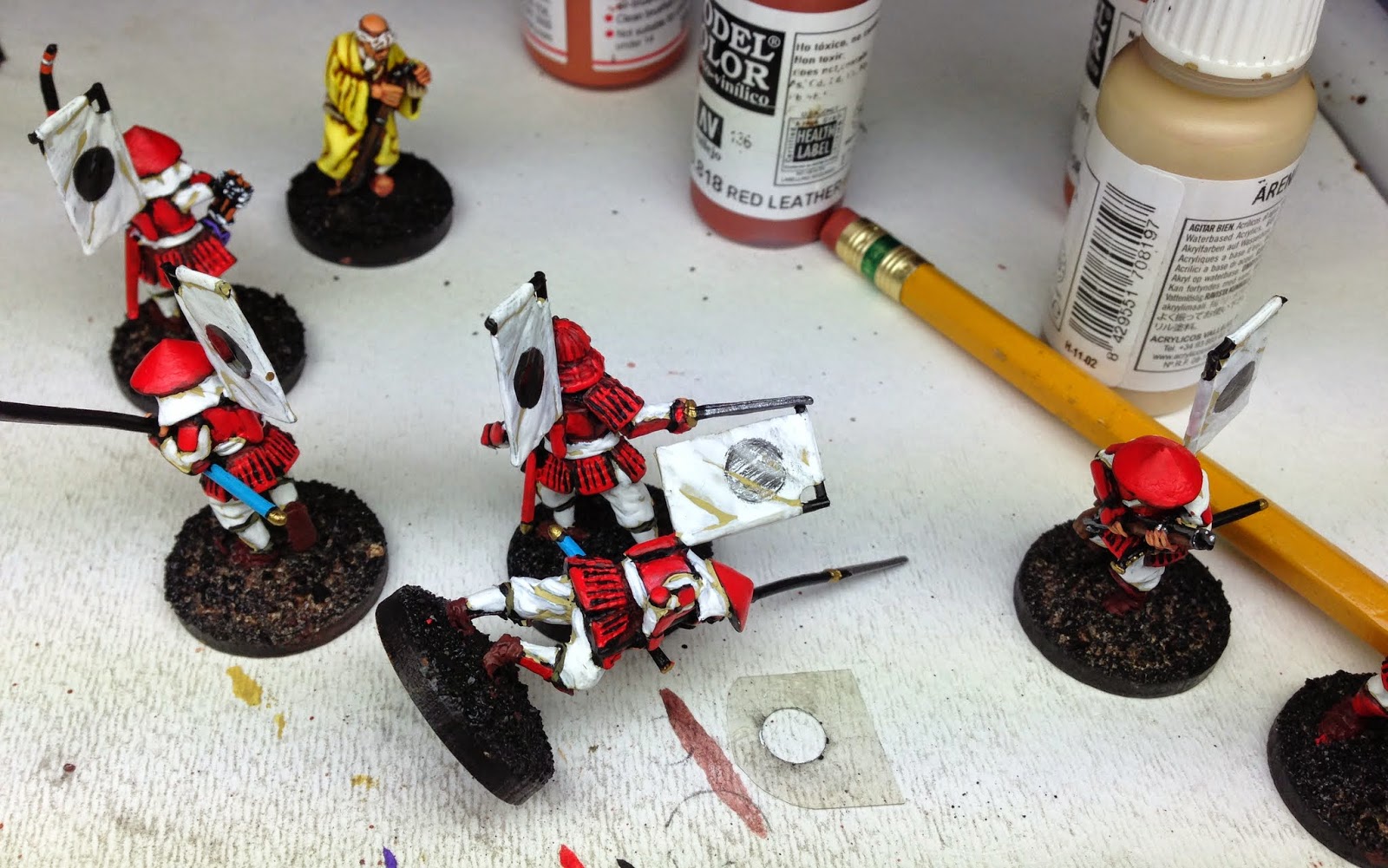 If it's good to paint outside of one's comfort zone, let's say "Mission Accomplished."

Lastly, I've been nominated for the Liebster.  I'm working up my recommendations of fellow bloggers but I'm down to typing with one hand.  I burned and blistered 4 fingers on my lawnmower muffler when I leaned over to adjust the damned thing.  This just reaffirms that one should avoid yardwork where possible as it is hazardous to your health.  More on the Liebster to come.
Posted by Monty at 8:10 AM 27 comments: 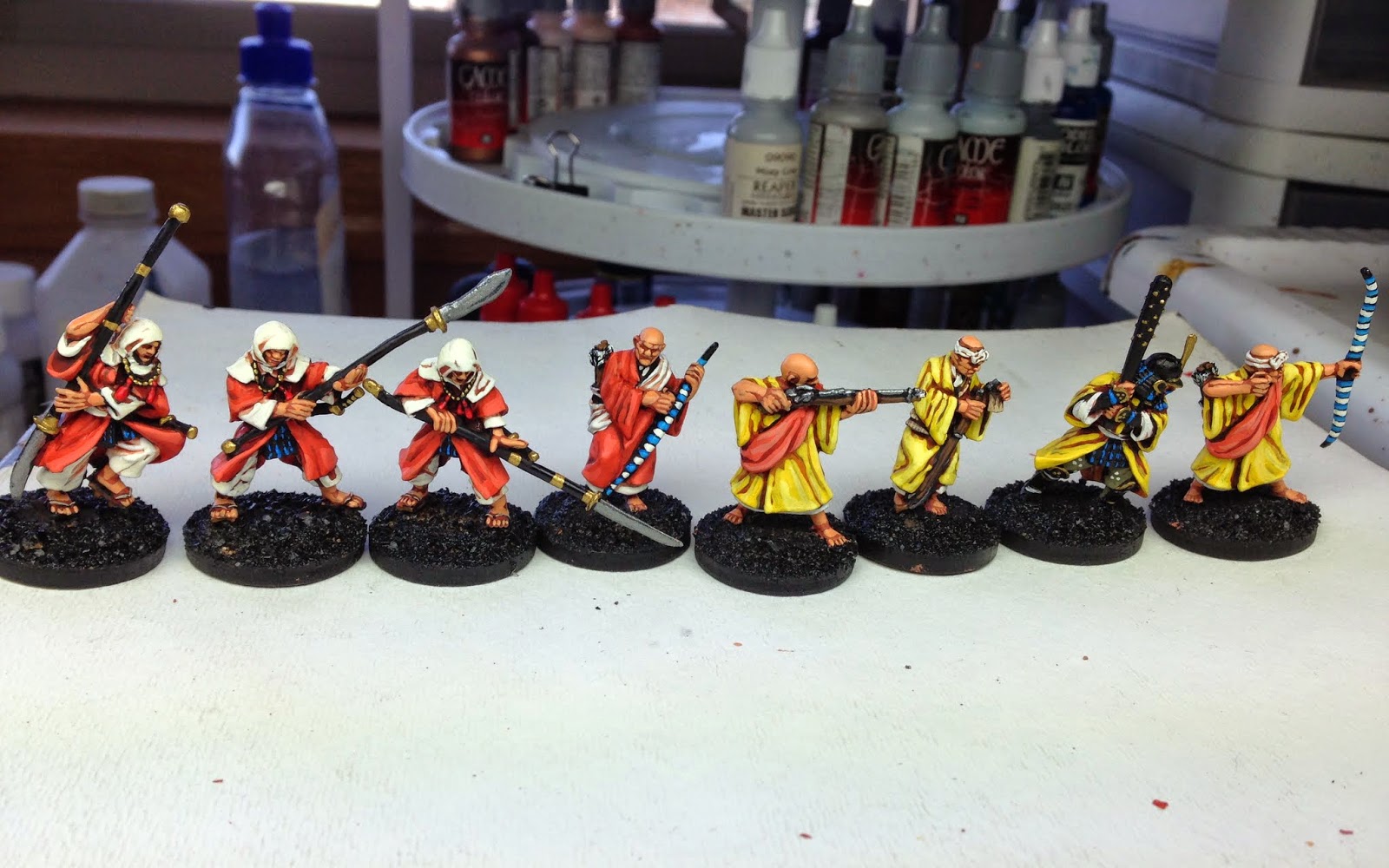 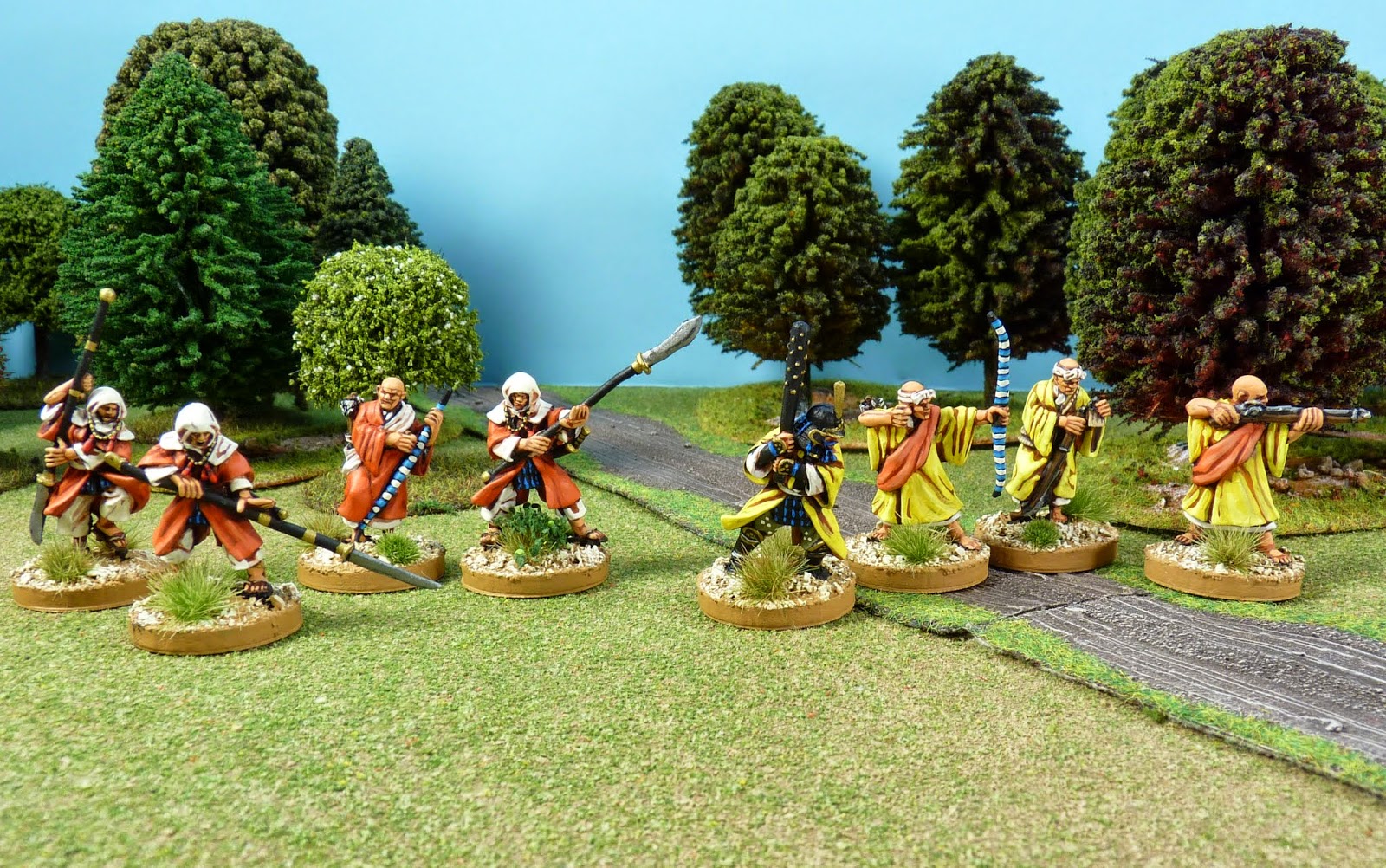 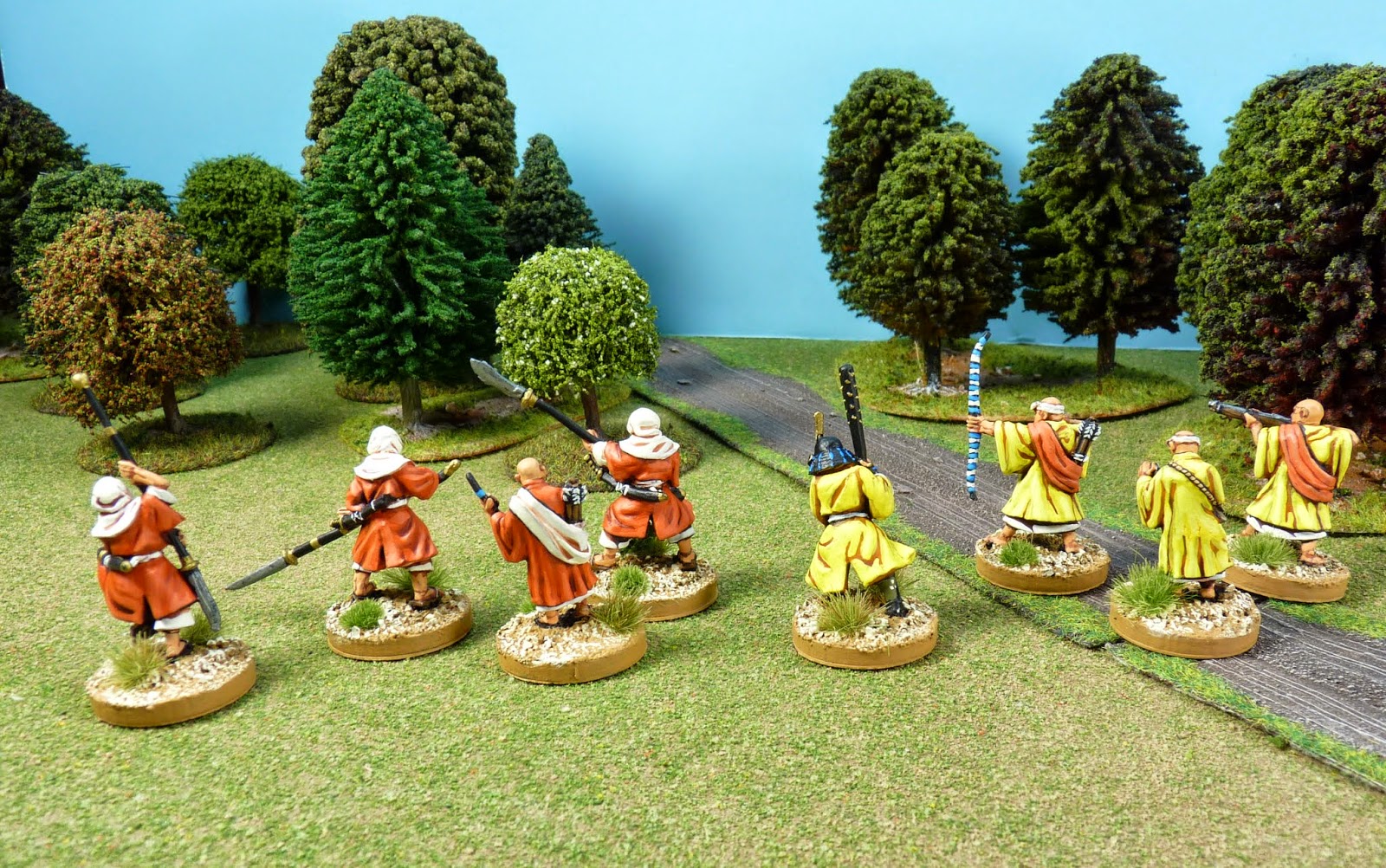 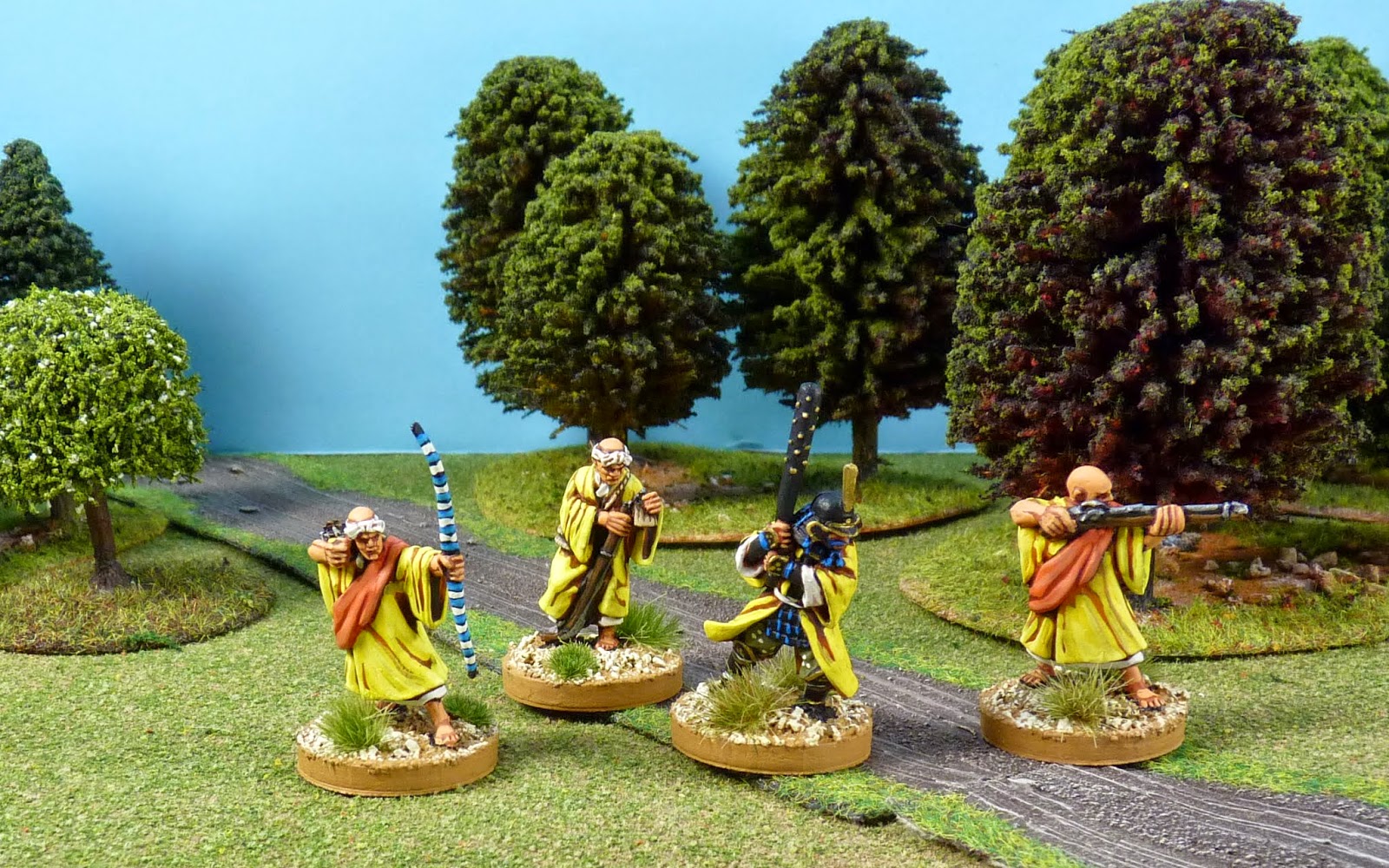 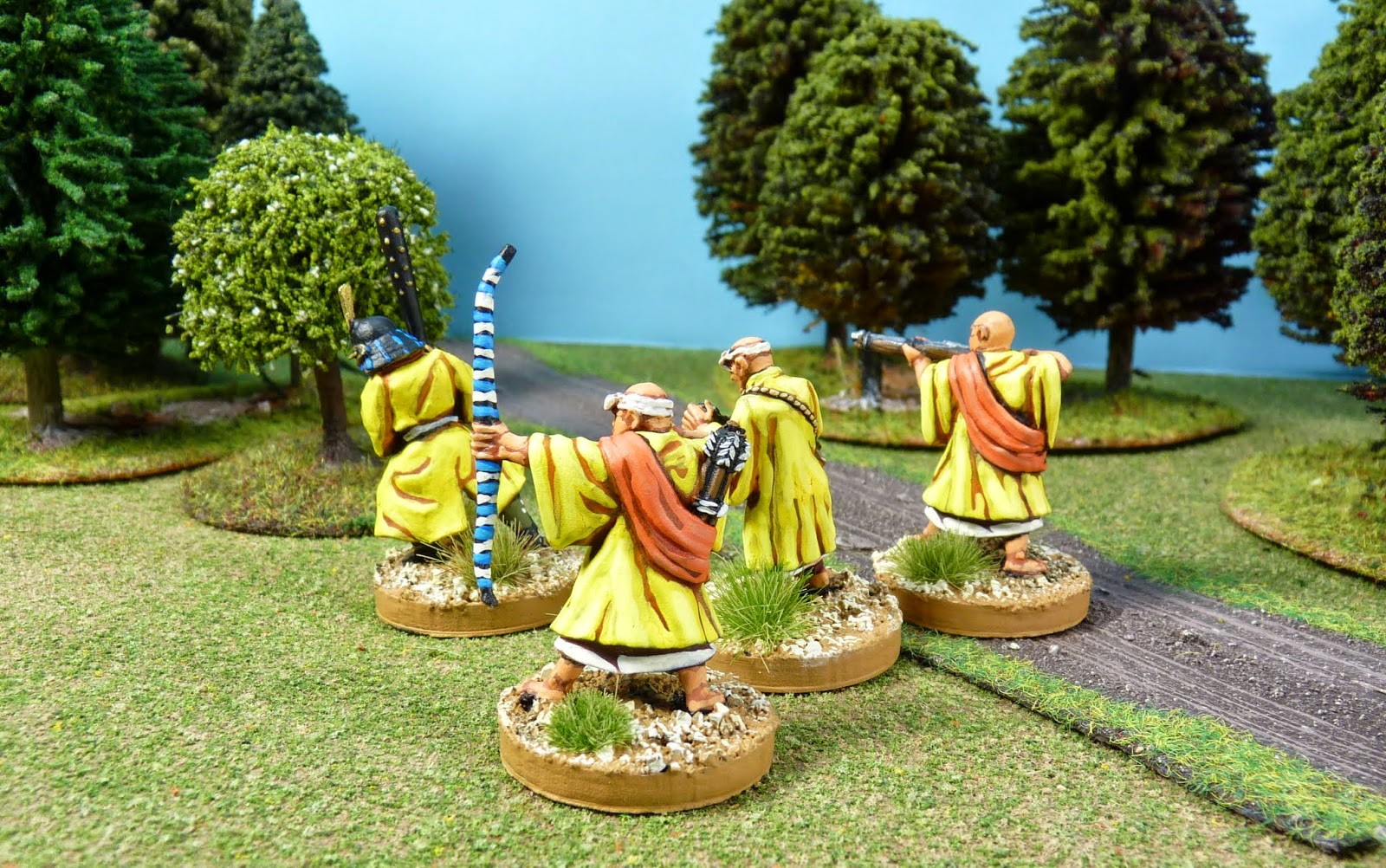 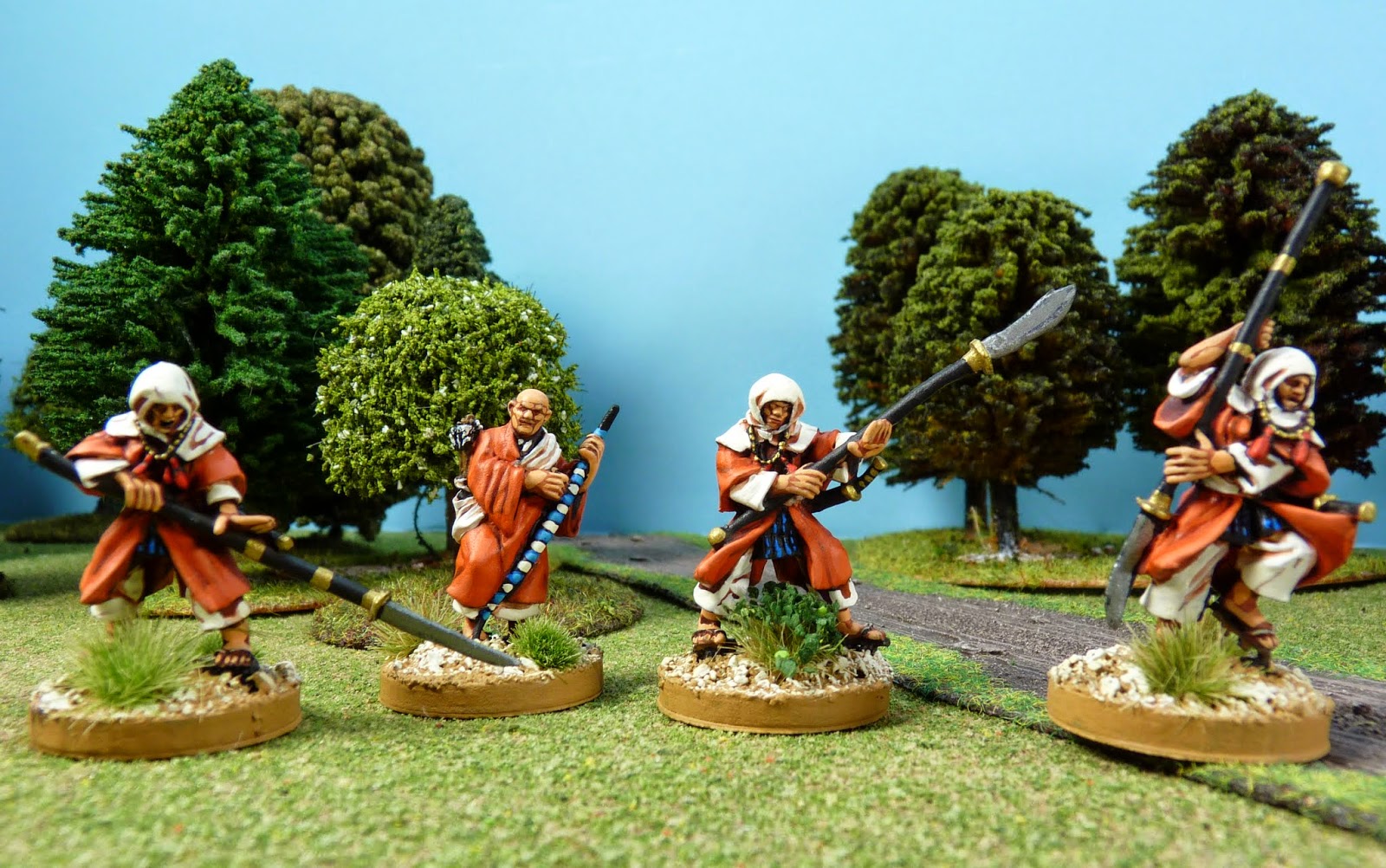 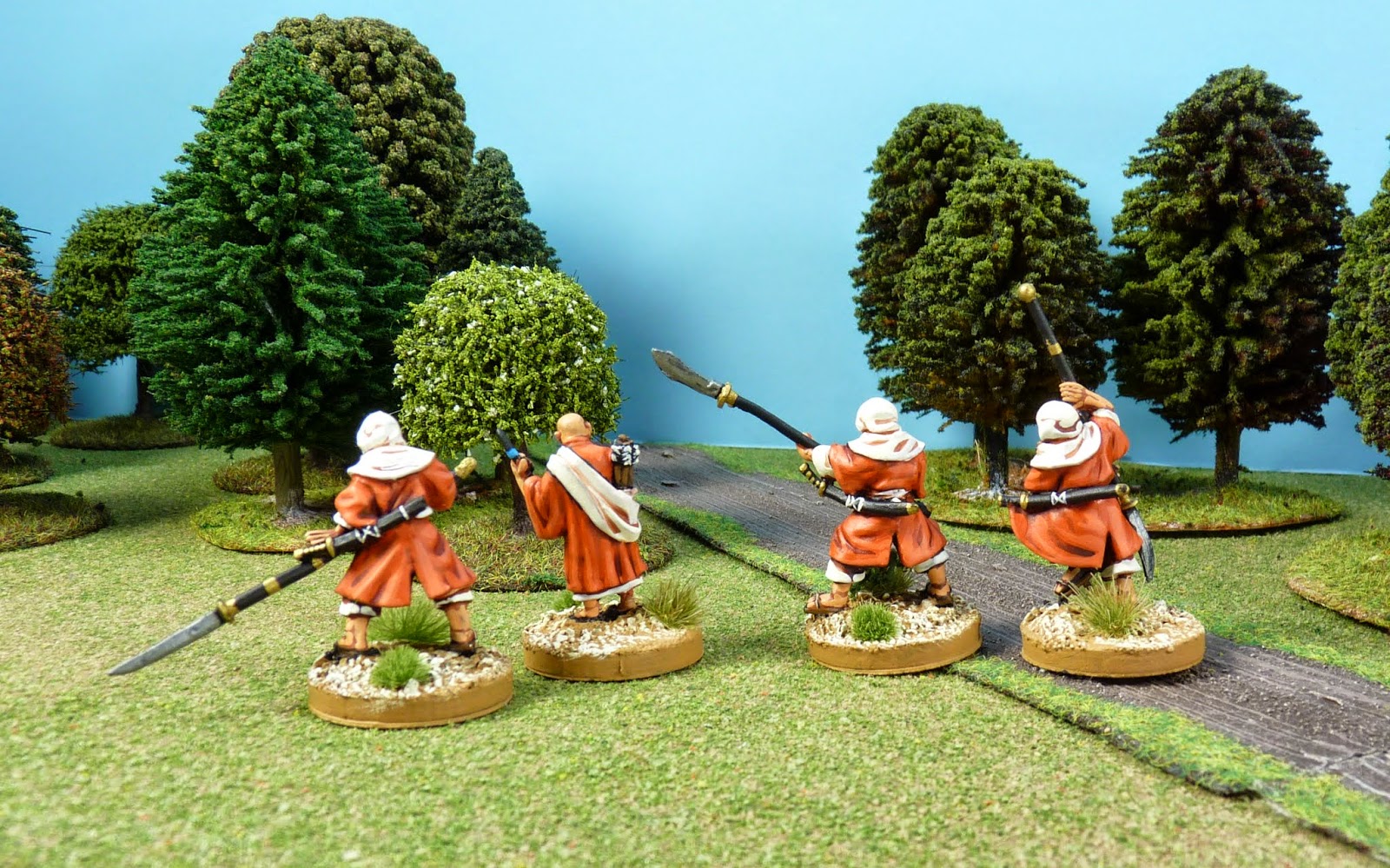 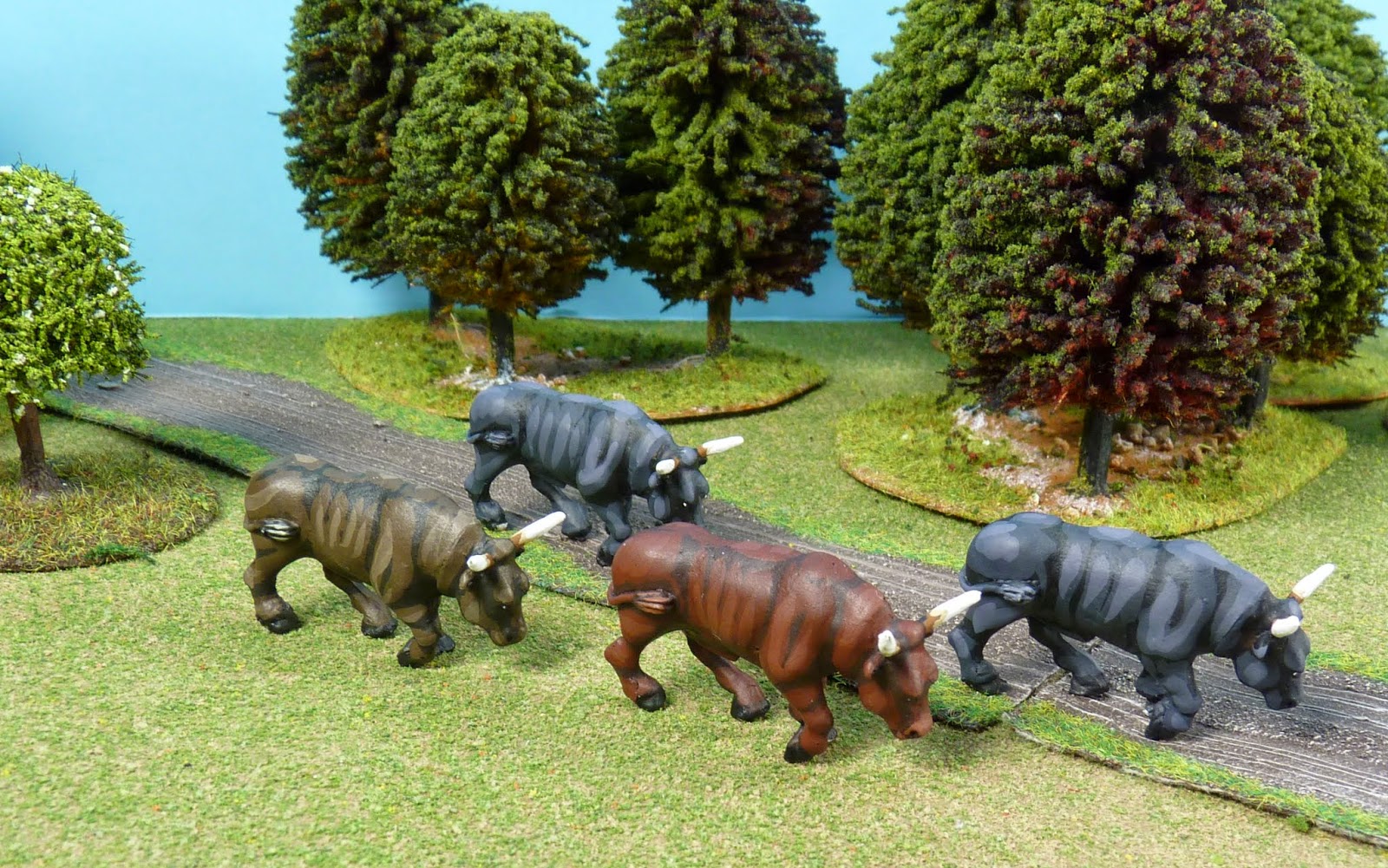 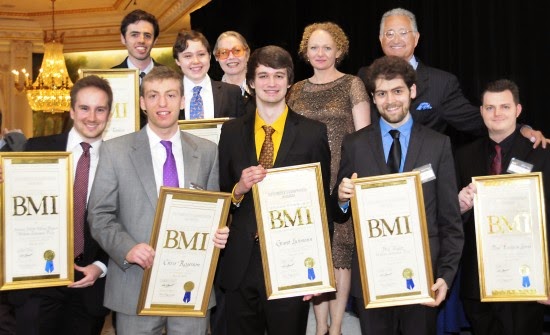 If camps had titles, this would be "Mopping Up." I decided early on to use the ambush and annihilation of Legio V as inspiration for my Dacian camp. Luckily, I had just enough spare Xyston lead to pull it off. Two of the Roman shields are mangled to reflect damage from the dreaded falx.  The downed legionaries and Dacians were doused with Citadel blood.  A falxman is running around with the Legio V elephant standard.

Field Fortifications:  I've had this resin kit for awhile.  I painted it up in case it might be useful in a scenario with the Romans.  Nice kit by Hovels, Ltd.

Command Stands:  I used a spare Khurasan Miniatures Sarmatian horseman to represent my Sarmatian allied leader. That way, he won't get mixed up with the Dacian commanders. The dracos do pop nicely on the bases.

Dacians marched into the battle accompanied by boar-headed trumpets and the draco. The hollow dragon's head was mounted on a pole with a fabric tube attached. When filled with wind, the draco make a shrill sound.  Proving once again the Romans never let a good idea slip by, scholars believe the Romans adopted the draco following their conquest of the Dacians.

To wrap up the Dacian project, I can think of no better finish than the picture below.  King Decebalus lead his Dacian tribes and allies against Rome in multiple wars.  When the end came, Decebalus took his own life rather than face a humiliating captivity and parade down the streets of Rome.  In 1994, a Romanian businessman and historian commissioned a statute of Decebalus. 40 meters high, the monument is carved into a rocky bank of the Danube. The first time I came across this picture, I thought it was something from Lord of the Rings.  Instead, it is magnificent tribute to an amazing figure from ancient history.

Email ThisBlogThis!Share to TwitterShare to FacebookShare to Pinterest
Labels: Dacian

Painting shields for ancient armies can be a challenge, with the first question being "what should the shields look like?"  For some armies, the painting trail is well established. There's a wealth of material on Roman shields for color and style. Iberian shields? There's a baseline for colors and geometric styles. There's lots of reference material for Greek and Celtic shields as well. Dacian shields are a different story.  I looked at the Little Big Man Studios website for ideas, and also Trajan's column.  What I found was unpaintable in 15mm.

Then I stumbled across an old post on the Iron Mitten blog. Secundus drew highly stylized animal figures for his Celtic shields, much like the Uffington White Horse. Animals were worked around the shield boss with an elongated neck,  or legs, or antlers. Following the trail Secundus blazed, I painted one animal figure, then another and another.  BINGO!  It's simple but looks quite nice in 15mm.

Javelinmen: Medium foot javelinmen make up the backbone of my Dacian army.  They're undrilled average impact foot.  Like most "barbarian" foot in Field of Glory, they must disrupt the enemy at impact or else struggle in melee. Dacian foot is portrayed as javelinmen because archaeological evidence reveals many spearheads & javelins but not many swords.  Then again, Emperor Trajan may have had his legionaries collect all the Dacian swords after subjugating them.

Skin tones for the shirtless lads was done with 2 highlights. The Dacians are one of Old Glory's best  lines. Great sculpts, very little cleanup required and a huge variety of poses.

Skirmishing Javelinmen: These skirmishers have a crucial role in my Dacian army.  Falxmen are vulnerable to missile fire as they carry a 2 handed falx and no shield.  I'll need the skirmishers to protect the falxmen from missile fire until they're ready to go in.

Archers: Medium foot archers have a roll to play in my army as well.  I'm going to run my javelinmen warriors in large 12 base units.  6 bases of archers can provide rear support to 2 large units of javelinmen. My javelinmen need rear support and a general leading from the front to have a prayer against legionaries.

During Trajan's campaign, it was reported that the Dacians placed well-camouflaged archers in trees to snipe Roman officers.  I figured green was a good color for tree-sniping archers.