To finish the Impetus armies I started last spring, I needed a Gallic and Pontic camp plus Pontic command stands. Here are the results!

Gallic Camp: Seeing as how they're on the move, I think the player who deploys this camp should be allowed to move it across the tabletop each turn!  Old Glory driver, Black Hat wagon, Splintered Light dogs and handler, Xyston rider. 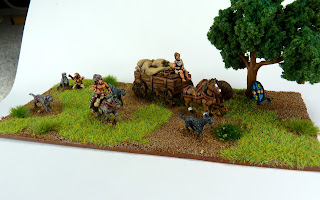 Pontic camp:  Xyston figures and Baueda tent. Bark from the banks of the Mississippi doubling as rocky terrain.   Brent, I'll need a fresh baggie the next time we get together! 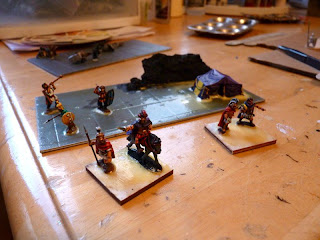 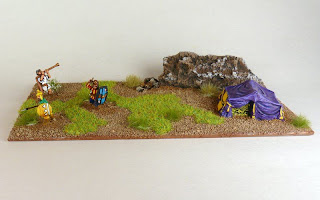 That wraps up my 15mm Impetus projects once and for all.  Next week, I'll explain why all of these fellows moved on to new homes.
Posted by Monty at 6:02 AM 33 comments:

The Royal Banderium were the finest troops in Matthhias Corvinus’ Hungarian Black Army.  They were composed of nobles, exceptional mercenaries and high ranking members of other bandieras.  Inspired by the picture below, I painted the Royal Banderium in black.  I did work them up a bit as straight black left them looking like they were primed and waiting for paint.

The Royal Banderium, "Back in Black" version:

I recently had an opportunity to get in on a large Essex Miniature buy.  Having sold off my Hungarians over the summer, I was looking for a new medieval army. After studying the Field of Glory army lists, I decided to buy and paint a new Medieval Hungarian army. Yea, that's kind of embarrassing...

What sucked me back down this road are some ideas for painting version 2.  True to their name, I plan on using black as a reoccurring color throughout the units.  Mind you, I won't paint them all black as that'd be boring.  In my mind's eye, this will be a 15th century armored badass meets AC/DC.  The Black Army, "Back in Black."
Posted by Monty at 4:56 PM 20 comments:

After seeing my Spanish army convincingly whipped the first time I put them on the table, I had some nagging doubts.  I suppressed these by working up a Sertorius' Lusitanians list. This ancient Spanish army allows you two Legionaries and an Inspired Commander. Most importantly, you can take your Medium Foot as drilled.

My Lusitanians were facing Klay's Early Carthaginians.  Sertorius proved his worth in the early game with a +2 to my initiative roll.  I won initiative and chose Hilly terrain as it suits my Medium and Light Foot army.  Most of the terrain landed on Klay's side, forcing him into an unorthodox deployment.  His chariots formed on his left wing as that was the only large clearing.  His center was composed of Medium Foot in the brush and Heavy Foot deployed in a narrow clearing.

In the early game, Klay sent his cavalry to threatening my flank.  I had no cavalry on my left flank to counter this move so I was sweating.  I sent the bulk of my foot straight at the Carthaginians while taking my other legionaries out of the line to respond to the flanking cavalry.  As I pushed forward, Sertorius  paid dividends with his ability to command a battle line of 6 battlegroups. And I had exactly 6.  On the double, men!

At this point, I charged his skirmishers with mine.  If Klay stood to meet my charge, our melee would block his troops and allow my main battle line to hit him before he cleared the terrain.  If his skirmishers evaded, I'd get 2 turns of missile fire to soften him up before I charged home.  Klay chose to evade one unit of skirmishers but stand with a unit of Balearic slingers.  This cleverly tied up 2 of my skirmishers, where he could walk up medium and heavy troops into combat.  My charge was looking like a mistake.

It was to prove an act of genius as my skirmishers somehow stood firm for 2 full turns of melee against heavy foot, allowing my main line to come up and hit the Carthaginians before they cleared the rough terrain.  That meant the Sacred Band was stuck in the rear.

On the other flank, the chariots were having a hard go. My skirmishers were giving a good account against his chariot bowmen, managing to reduce a unit by a base.  Klay had me overmatched to his front but he could see my forces waiting on the flanks to beat him should he charge.

Sertorius lead from the front and my Spaniards gave a good account of themselves.  They hit and broke a unit of African Spearmen, the Sardinians behind them and finally the traitorous scutarii mercenaries in the Carthaginian 3rd line.  The Sacred Band and the flanking cavalry never got into battle.

With the game slipping away, the chariots make a series of charges.  Our lines hold up and down the line.  When one of the chariots breaks, Carthage hits their army break point.  Sertorius wins!

Key to the game was the terrain, which forced the Carthaginians into an unconventional deployment.  The heroic stand of the caetrati and slingers in the early game allowed me to hit the Carthaginians before they redeployed beyond the rough terrain. After every game, Klay gives a debriefing and today, he agreed the Sertorius' Lusitanians list is a keeper.

Making a camp is always a challenge for me and I typically put it off until the very end of the project. You, the artist, must capture the essence of the army you painted in a small footprint. No pressure but the camp should be a lively diorama or vignette, limited only by the figures you can find in 15mm and your boundless imagination. What's that? You don't have a boundless imagination? Well then, quite simply, you're screwed.

The first step in making a camp is easy.  I can measure 120mm x 80mm with the best of them.  Then I  stare at my canvas in miniature and I'm stumped. Unless it's the Romans.  Nothing says camp for Romans like a Roman tent and a wall with pointy bits and some leftover legionaries. Unfortunately, such a display is only appropriate for Romans and you need to get more creative for all of the non-Roman armies of the ancient world.

I wanted to capture the "ruggedness" of Hispania so I toyed with the idea of an ambush in a mountain pass. It can be done but I couldn't get it quite right with the figures I have in this small footprint.  I did take the "mountain ambush" idea and turn it into something I'm pleased with. Hispania was made up of the Iberians, Lusitanians and Celtiberians tribal people.  I found some noncombatants in my lead pile and bingo, I had it.  My camp would be the women and children seeing warrior husbands and fathers off. A muster for battle like this would've been a somber affair.  If the invaders are not beaten and repelled, the tribe would face a range of poor outcomes ranging from slavery to outright annihilation.  I think the old woman with her hands on her hips captures the spirit of it.

Last up are the commanders. Finish line, here I come!

To wrap up my Iberian Project, The Clash "Spanish Bombs."  If you give it a listen, you'll want to hear London Calling all the way through and you'll feel the years fly by! Then again, I'm probably projecting.

Sertorius and his Spanish Legion

The story of Quintus Sertorius is a fascinating one. His first military service was under Quintus Caepio at the disastrous Battle of Arausio.  There, the Teutones and Cimbri destroyed 2 Roman armies, inflicting losses that exceeded . Sertorius was wounded in many places during the battle and still managed to swim across the save his life.

He learned the art of war serving Gaius Marius as a Tribune.  Plutarch reports that Sertorius disguised himself in Celtic dress to spy on the Teutones and Cimbri. Subsequently, he fought at the Battle of Aquae Sextiae where Marius' destroyed the Teutones.

Sertorius was in charge of recruiting and training legions for Marius during the Social Wars and that was the start of his downfall.  Once Sulla forced Marius into exile, Sertorius ended up on the proscription list. Sertorius fled to Hispania where Roman refugees and deserters would later join him in exile. The Lusitanians hired him to fight the Romans and he cobbled together and trained an army that kept Rome at bay during the 8 year Sertorian War.  He was more than a match for Pompey, defeating his combined armies more than once.

After inflicting terrible casualties on the Romans, Sertorius made a fateful gamble to win control of Hispania once and for all. He attacked the fortified camp of Metellus and Pompey and was thrown back with terrible losses. This was a defeat from which he would not recover. Metellus offered 100 talents and 20,000 acres of land to any Roman who killed Sertorius.  A Roman in Sertorius’ camp named Peperna led a conspiracy which culminated with the plotters falling upon their leader with daggers and swords during a banquet. Thus ended the life of one of the great men of .

For a full read at your leisure, I'd recommend:  The Sertorian War.

For Sertorius' legion, I chose a combo of white and tan for the tunics. I'm guessing that as their equipment wore out, his men improvised or picked up gear from the Romans in the field.  All Xyston figures.

The Sertorius Lusitanians list in Field of Glory allows you to take 8 bases of legionaries, which represents the Legionaries who served under him. You can also take your Lusitanian medium foot as drilled, which comes straight from Plutarch:

"He was also highly honored for his introducing discipline and good order amongst them, for he altered their furious savage manner of fighting, and brought them to make use of the Roman armor, taught them to keep their ranks, and observe signals and watchwards; and out of a confused number of thieves and robbers he constituted a regular, well-disciplined army. He bestowed silver and gold upon them liberally to gild and adorn their helmets, he had their shields worked with various figures and designs, he brought them into the mode of wearing flowered and embroidered cloaks and coats, and by supplying money for these purposes, and joining with them in all improvements, he won the hearts of all.  Nor were the Spaniards alone ambitious to serve him, but the Roman soldiers, also, that came out of Italy, were impatient to be under his command.... "
Posted by Monty at 3:46 PM 24 comments: