It's the finish line for another SAGA warband.  I turned the warlord that comes with the Norse Gaels pack into a bannerman. With both hands tucked behind a shield, he'd have made a non too threatening warlord. The lovely banner is by LBMS.

Last of the Norse Gaels hearthguard.  I've looked but cannot find the name of the loincloth-like protective kit these fellows are wearing.  I assume it's a Dark Ages protective cup?

While the Norse Gaels are an older line of Gripping Beast figs, the rough spots in some of them were surpassed by their character and energy.  Now I need to get these fellows out for a "test drive."

I've put my 15mm Later Hungarian army up for sale at the top of my blog. The poor fellows have not seen the light of day so off they'll go. No worries, I've got loads of unpainted lead coming in the mail to me right now. The seller told me one of my boxes weighs 19 lbs so I think it's safe to say I'm on my way to building a lead mountain!
Posted by Monty at 7:54 AM 29 comments:

Bang a Scutum, Celtiberians are done

Up today is a run that finishes out the ancient Spanish army I sold in January. All Xyston figures and once again, Xyston is a joy to paint.

First up are 16 bases of Celtiberian Scutarii heavy foot.  To set them apart from their Iberian breathren, I brought in dull yellow for tunics and bright yellow & runes for shields.  I'm quite pleased with how they look ranked up.  This seals the deal. I must find a partner for painting and playing Iberians and/or Celtiberians in 28mm.

I also painted up a small batch of Scutarii medium foot.  These fellows were painted to match the 42 bases of Iberian Scutarii I painted up previously.

I finished the core of my Dailami army last December and here's the rest. First up are Bedouin allies. The Bedouin ally commander can only attach to Bedouin troops in Field of Glory.  I painted the Bedouin units in black as a visual cue to help keep them together. In 15mm, that means a black basecoat followed by 2 highlights of grey.

Bedouin Light Horse:  The role of light horse on a battlefield is generally to skirmish and delay.  The role of Bedouin lancers is to run down enemy lights and destroy them.  Tough fellows! 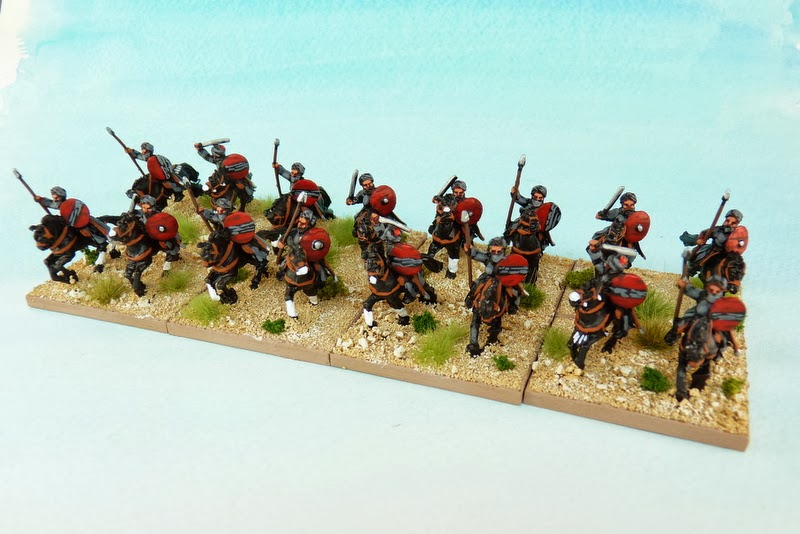 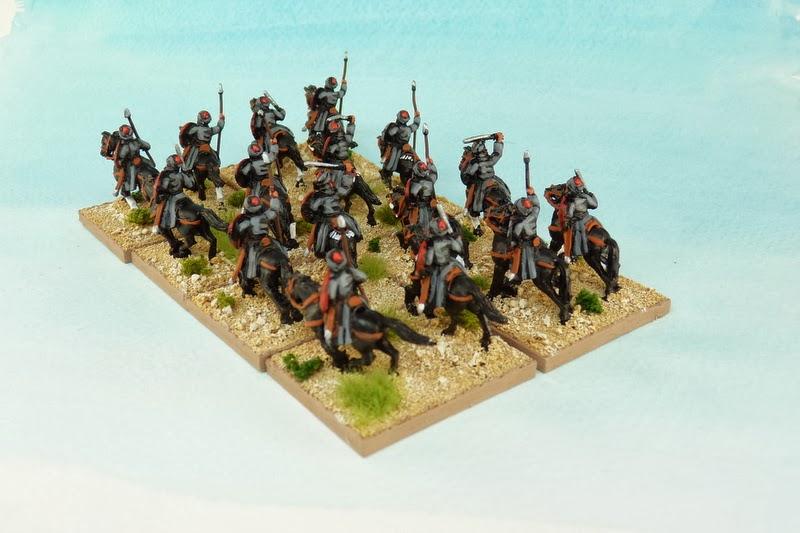 Bedouin Slingers:  Nothing fancy here.  Just slingers, annoying other troops on the battlefield. 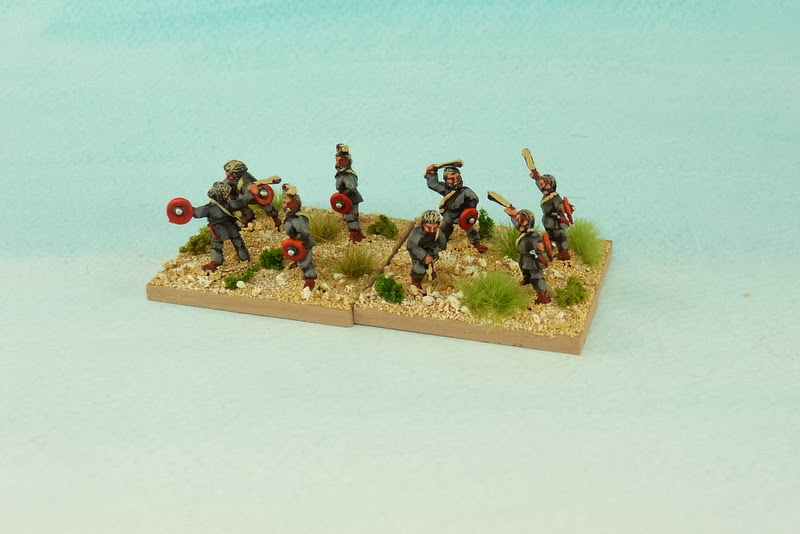 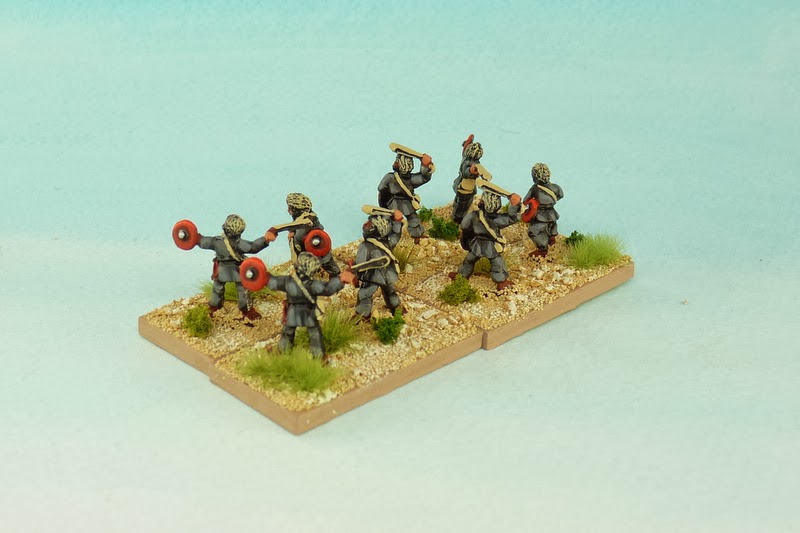 Bedouin Archers:  The Old Glory website suffers from the fact that they don't post up pictures of all of their figures.  As a result, I was surprised when I pulled these fellows from the box. They're either Bedouin slaves or men who eschew robes and turbans. 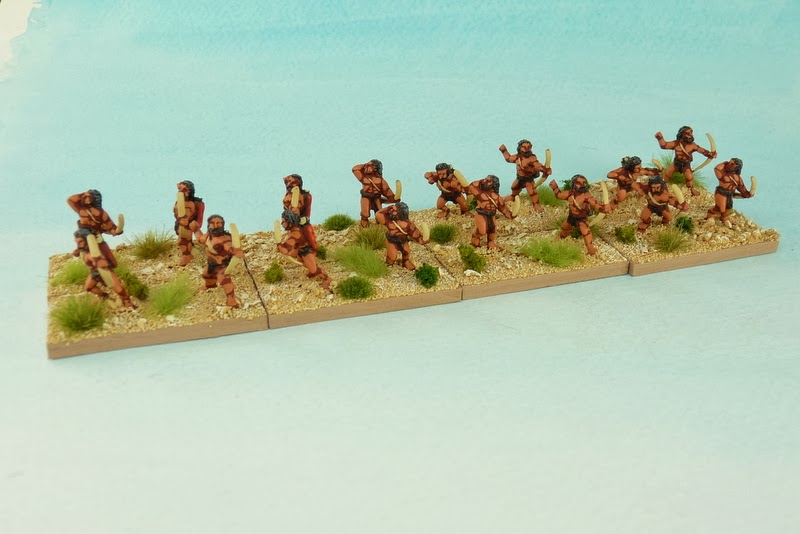 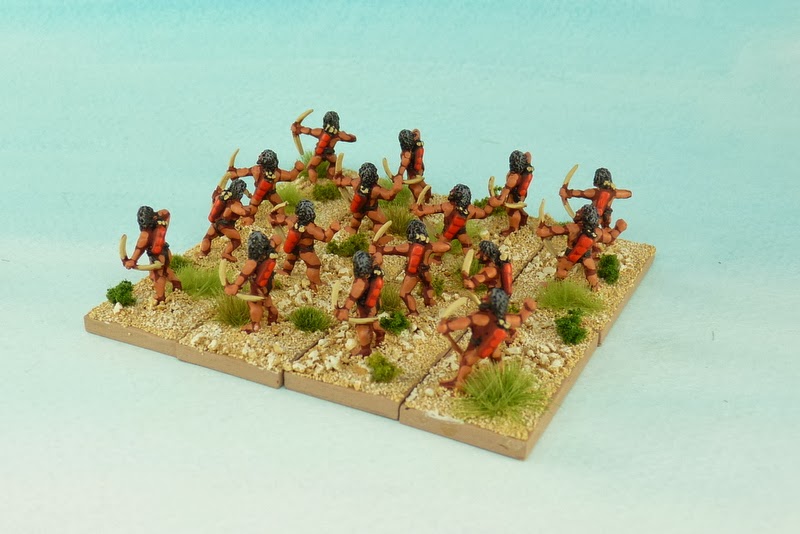 Next are the Ghazis.  Ghazi means "to raid" in Arabic.  Ghazis warriors depended on plunder for their livelihood and were prone to looting during peacetime.  Not a good way to impress your employer! 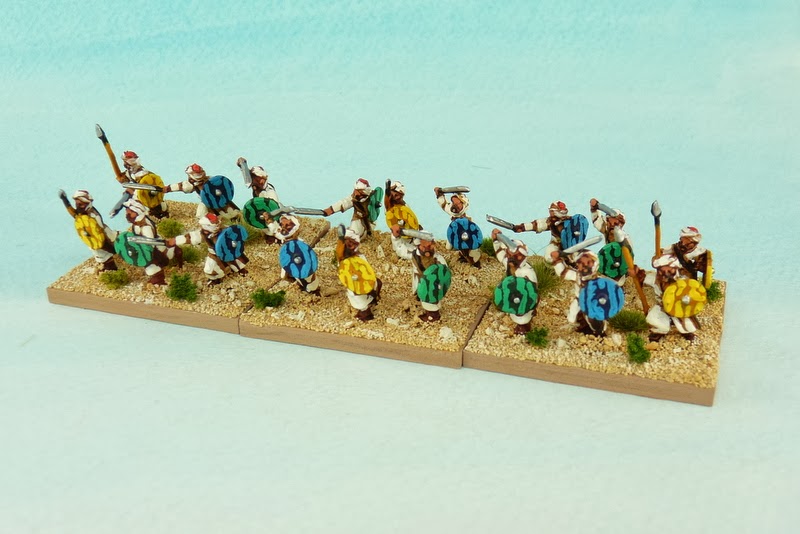 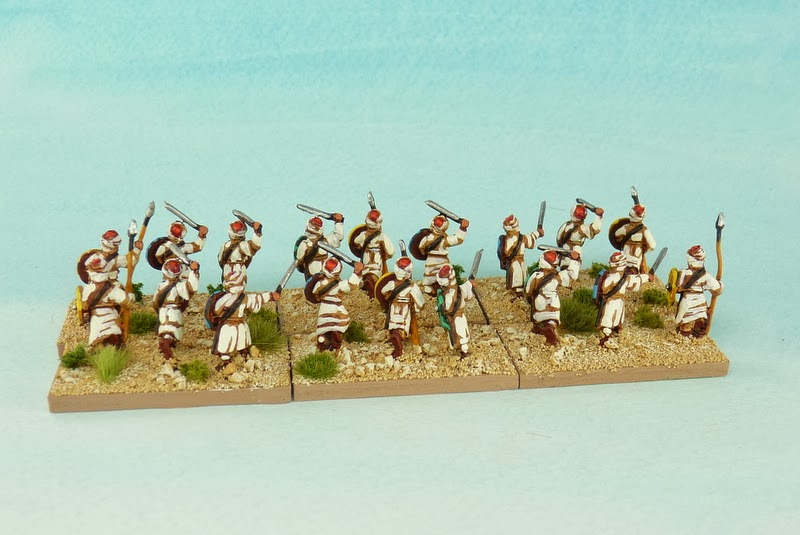 Ghazis Cavalry:  Lancer armed, these fellows will be tough at impact. 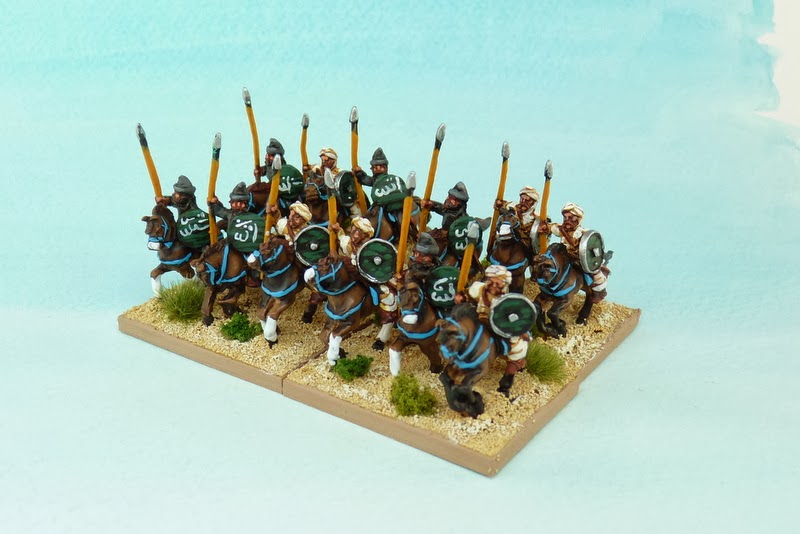 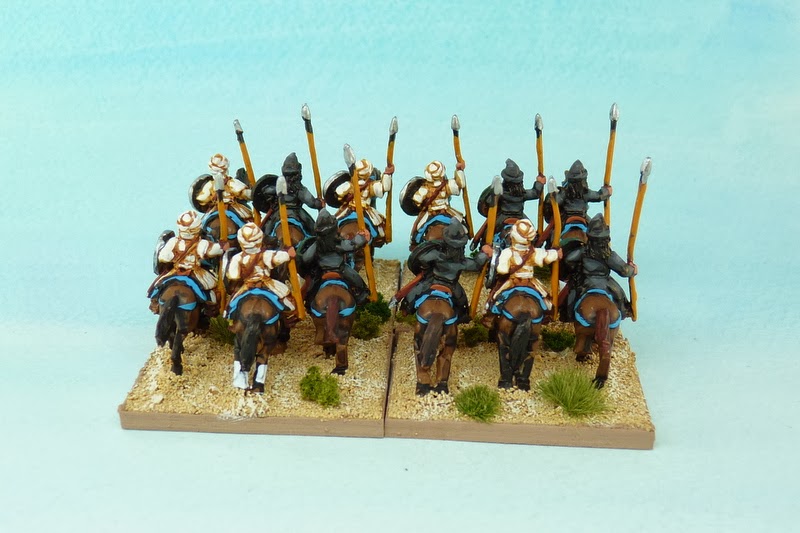 Ghilman Cavalry:  Ghilman were slave-soldiers who served in Muslim armies from the 9th century on. Trained and educated, they could earn their freedom through dedicated service.  They're equally good with the bow and sword. 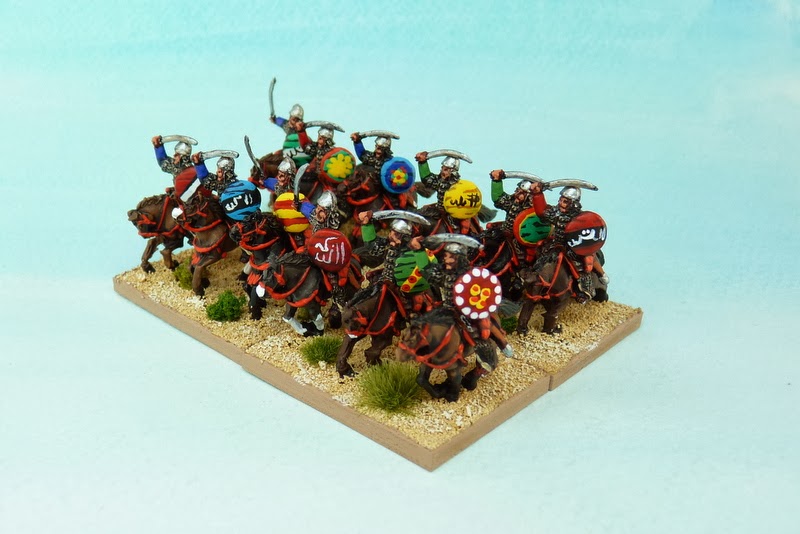 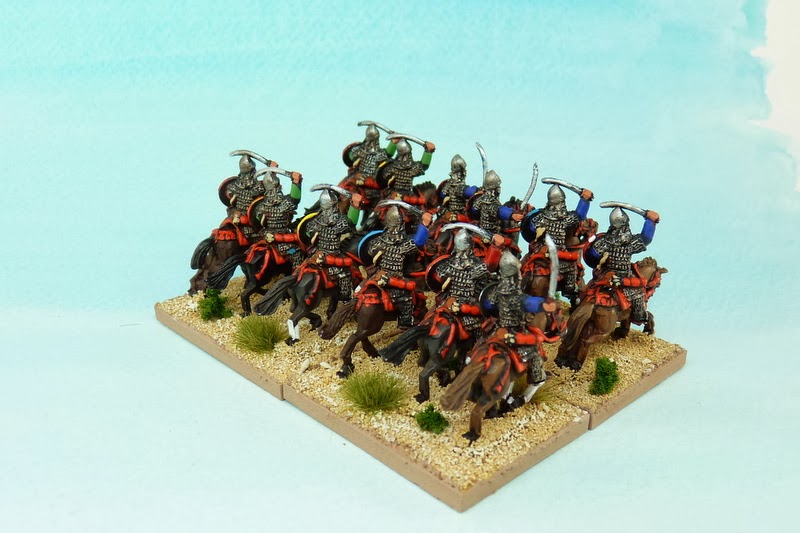 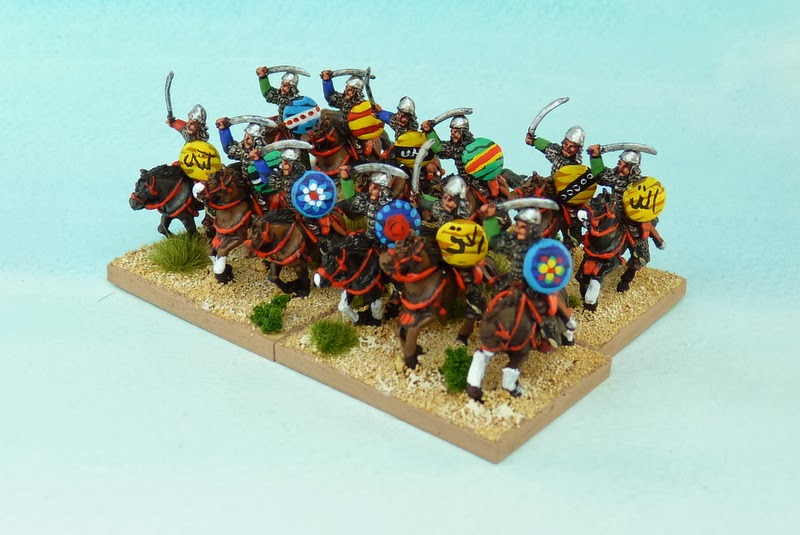 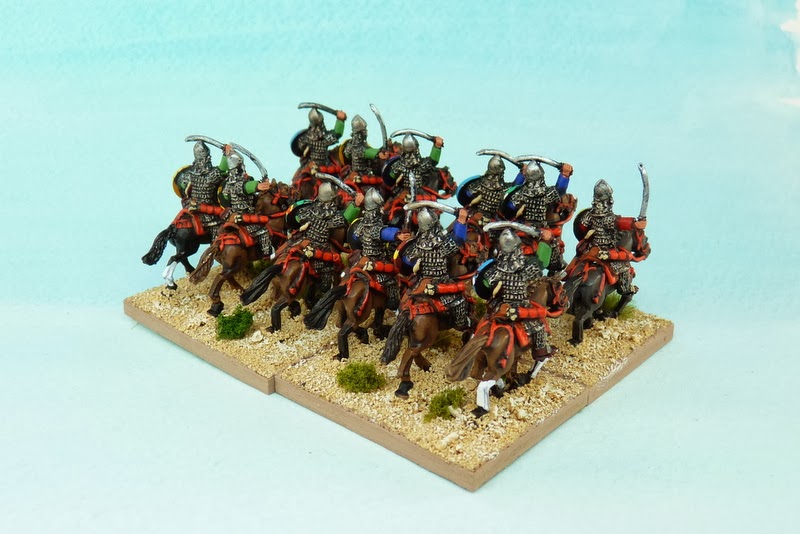 Kurdish Lancers: The history here is a bit thin but 11th century Kurdish cavalry are shown and described as wearing armor, helmet, robes, light lance, sometimes sword and shield, and sometimes bow. That's all I've got on these fellows!

I could not find armored Arab lancers on the Old Glory website so I took Ghilmen figures, trimmed their swords and drilled out the right foot to mount spears.  Presto!  Armored lancers. 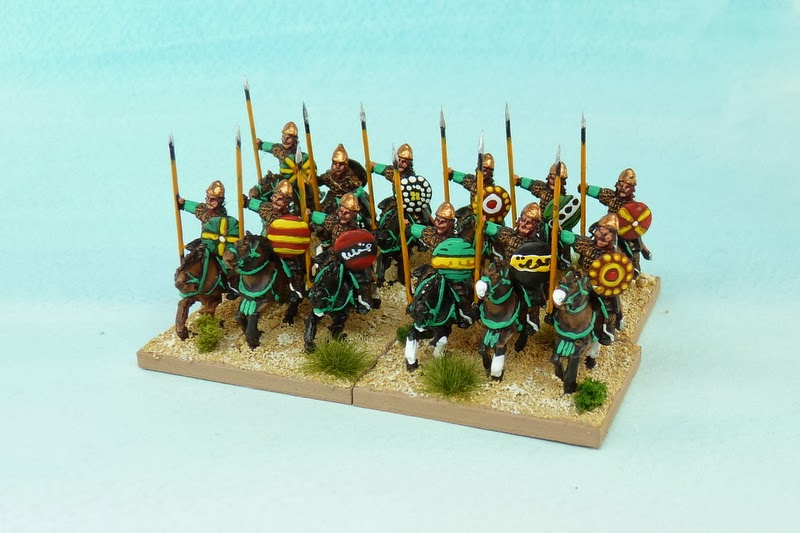 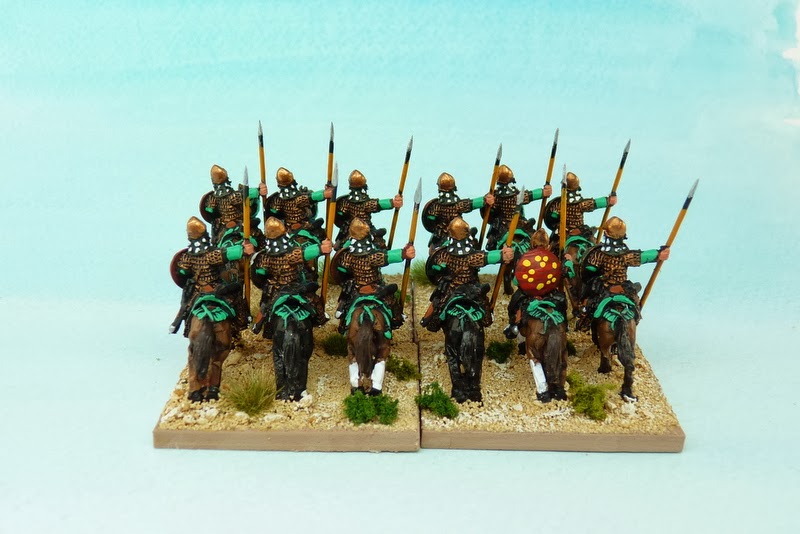 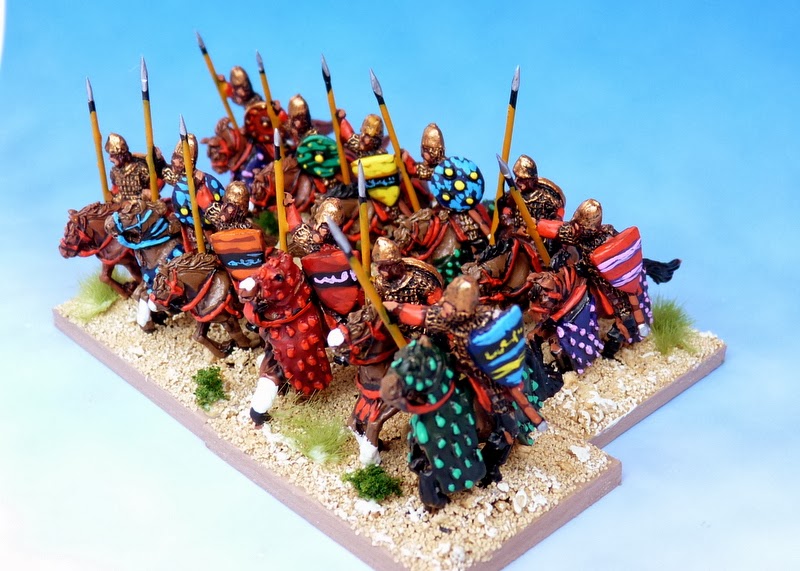 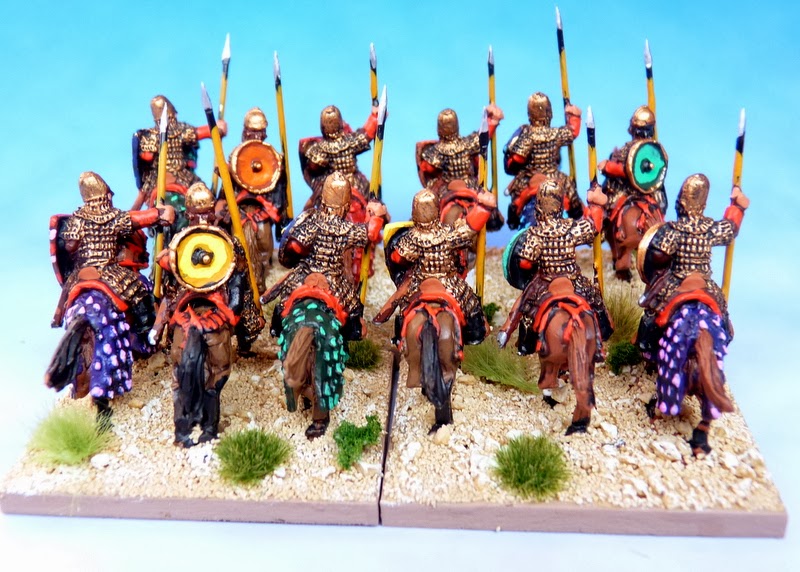 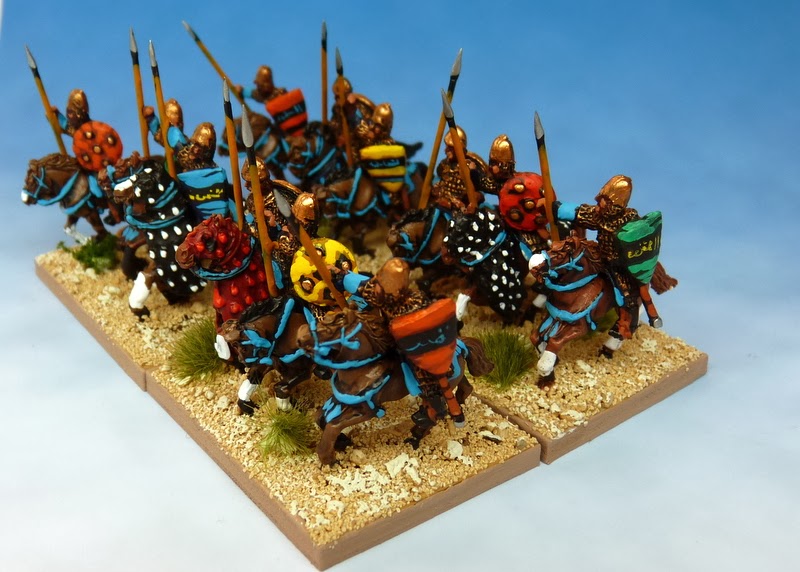 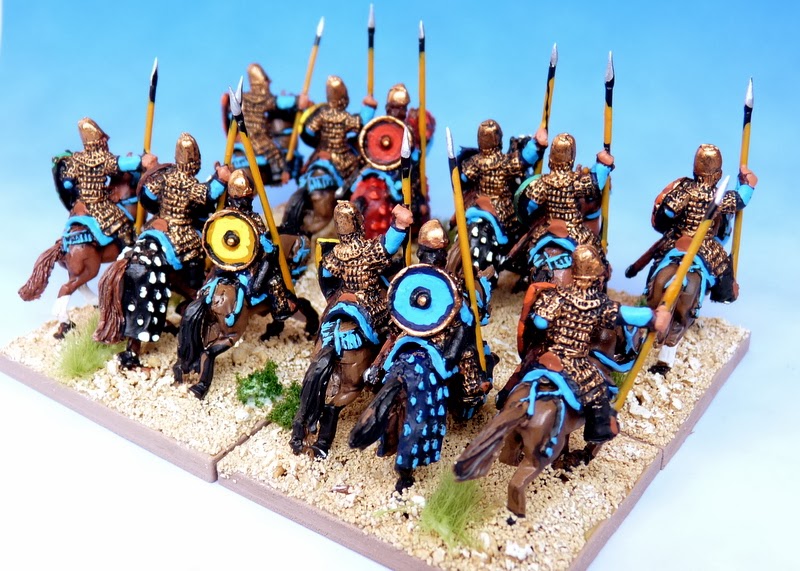 Camp:  Baueda tent and supplies with Old Glory figures and cart. With this, the Dailmi army is finished. 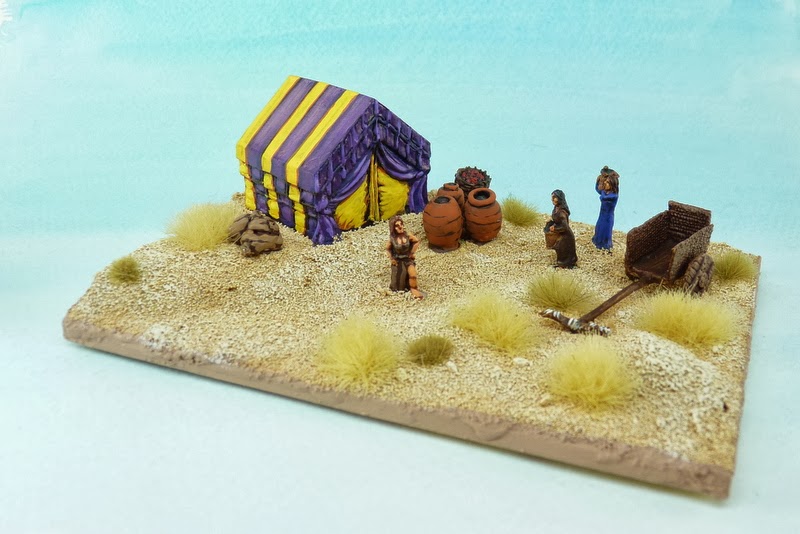 Email ThisBlogThis!Share to TwitterShare to FacebookShare to Pinterest
Labels: Dailami, Field of Glory

The Rocky Road to Dublin...

The rocky road to Dublin passes through these gents, so best take care.  All Gripping Beast figs with LBMS shield transfers. The Norse Gaels remind me of the saying "To a hammer, everything looks like a nail." These guys are hammers, every one, and they have the battleboard to prove it.

A couple of neat tricks...

Howling Axes: Gives 3 additional attack dice, 5 if the unit is armed with Dane axes.  That's a good reason to field axes in this warband.

Slaughter:  All 1s rolled become hits, 2s too if you use a rare rune.  When combined with the Dane Axe, you can turn all of your attack dice into hits. Combine this ability with Howling Axes and a small unit of hearthguard can wipe out a much larger one.  Deadly!

With abilities like Slaughter, Howling Axes, Death Dance and Ostmen’s Fury, their Viking roots shine through. If you like running Vikings in SAGA, you’ll love their mad cousins, the Norse-Gaels.

I'm working my way through the Great Courses lectures on the Vikings.  The 34 half hour lectures count as 1 book at Audible.com so with my monthly subscription, it's a bargain compared to the retail rate. I paint with the door to my painting room open and I think my family is enjoying the lectures as much as I do! So far, it's a great deep dive on the Norse. When I'm done, I'm going to grab the Romans and Barbarians course next.
Posted by Monty at 9:03 AM 42 comments: