One thing I love about SAGA is that locally, it keeps attracting new players.  With that in mind, I 'm going to play the role of "Average Dad" and dole out some advice to new SAGA players.

Don’t play the same warband against the same enemy in the same scenario over and over again.  I did this as a new player, only to see my Normans repeatedly whipped by the Irish. All those losses can lead a person to conclude that the game or faction is broken.  Trust me, it's not. Every faction has unique strengths and weaknesses that play out differently in each scenario and with different opponents.  Change up scenarios, change up opponents and you’ll change up the results as well.

Do keep it fresh.  There are 7 scenarios in the original rule book and 8 more in The Crescent and The Cross.  Additional scenarios are posted on the Studio Tomahawk forum, along with variations on the originals.  Try dicing for a random scenario to play  and play back-to-back games if you have time.  Variety is what makes SAGA really shine!

Do use SAGA as an excuse for a deeper historical dive!  Thanks to SAGA, I've read about peoples and periods I'd never read about before.  Painting Byzantines led me to Lars Brownworth’s superb “Lost to the West.” From there, I continue to read, think and dream about the Byzantine empire.  Painting Norse-Gaels led me to the Battle of Clontarf and the story of the Vikings in Ireland. From there, I discovered the fascinating story of the Norse conversion from paganism to Christianity. Beware! Once you start down the rabbit hole, you'll likely find you cannot get back out.
Don’t judge a battle board by its cover. You can’t see the strengths and weaknesses of a battle board without putting it in play.  When The Crescent and The Cross was released, I dismissed some faction out of hand because the battle boards looked weak.  The first time I played the Spanish, I moaned about their terrible board until suddenly, it clicked.  I found a sweet combination that helped steal a victory!  The Spanish have gone from "terrible" to my current favorite faction.  Take a chance and you might find a new favorite too.

Do try this game with your favorite beverage of choice.  It's not so hard that you have to be a Jonathan Nash (A Beautiful Mind) to manage the rules.  Field of Glory, I'm looking at you!

Don't let perfect be the enemy of good enough painting.  Setting the bar too high for yourself can result in a warband that you never finish. Block paint or block paint, wash/dip if you like. The key is to keep moving forward and put a warband on the table, not win "Best Painted of 2015."

Do have fun!  After all, that’s the reason we all come out to play!

On the painting front, I finished 8 more jinetes for my Spanish warband, including a linen war banner.  My 4th try is my best yet, I think!  I worked up from black to hull red to red/yellow to the highlights. I followed Michael's advice and painted in a wet-brush fashion so some of the black base color peeks through.

I also finished a pagan and Muslim priest for our upcoming SAGA campaign. At some point, I'm going to have to paint up a bard as well.  The fellow in black took a couple of tries to get right.  I tried neat, dark triads but at the finish line, he had turned grey.  Out came the black paint for a reset and just the lightest touches of grey over it.  This was a time when less was better!

aka "Eureka, I finished the Punic Wars project!"

Carthaginian Elephants: I painted 5 with Carthaginian motifs and 5 without so they could port to a Pyrrhic army.  The ellies didn't have much in the way of skin folds so I used a triad of greys to paint wrinkles in.  Elephants are the natural centerpiece of the Carthaginian army and I think these can shoulder that burden. 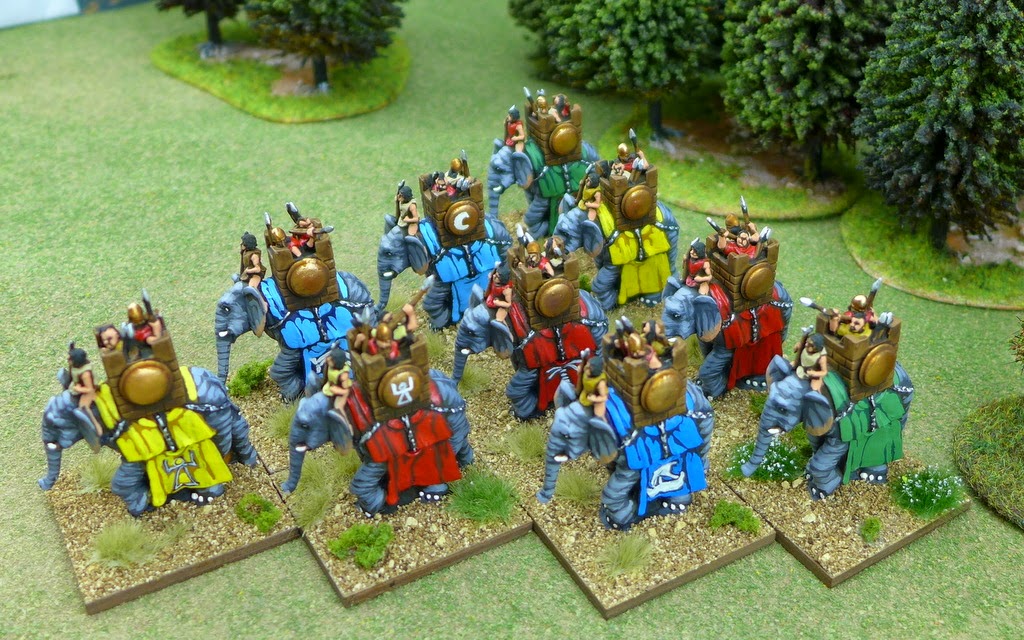 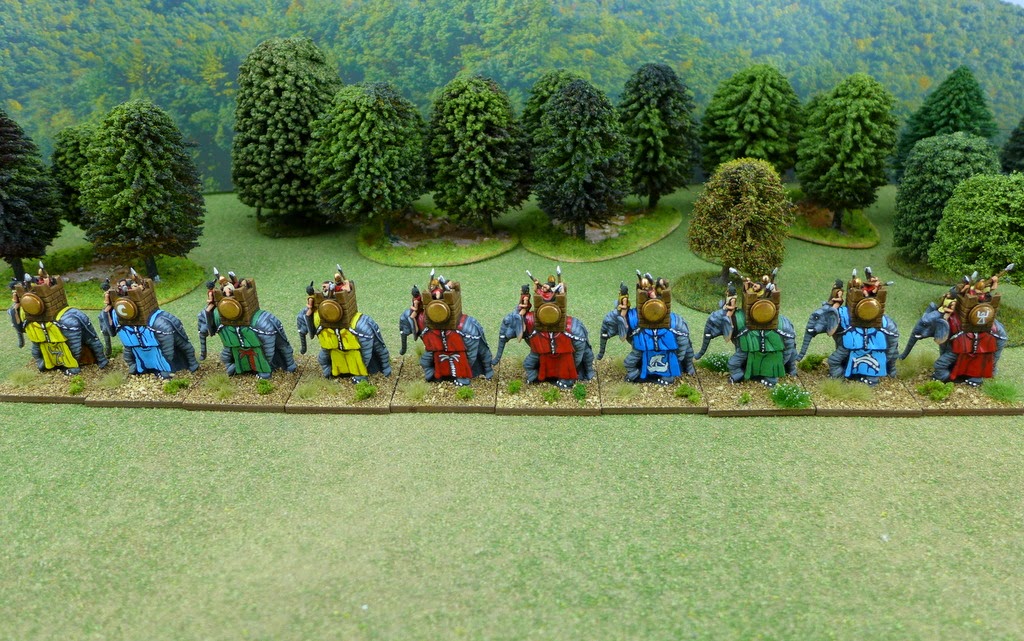 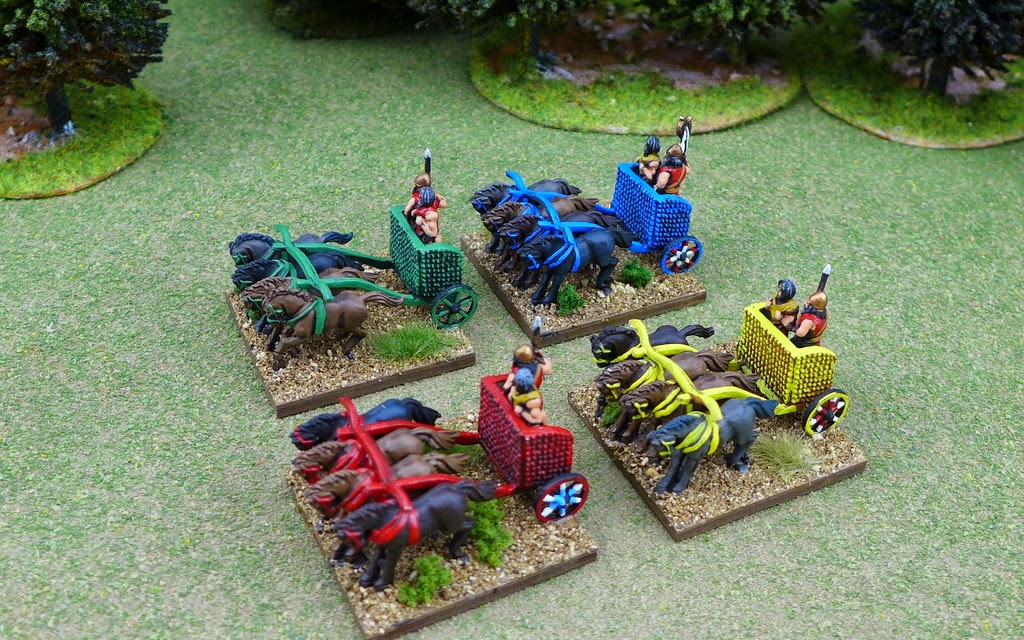 Carthaginian Armored African Veterans: A close look shows them kitted out in Roman gear. I painted the black shields with white palm trees, making them the original Afrika Korps. 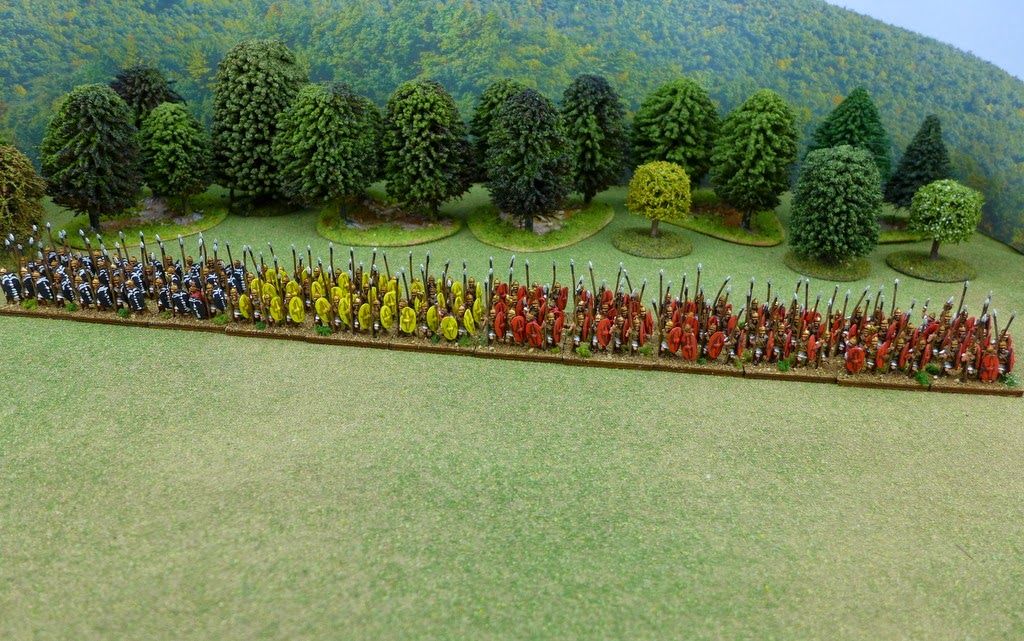 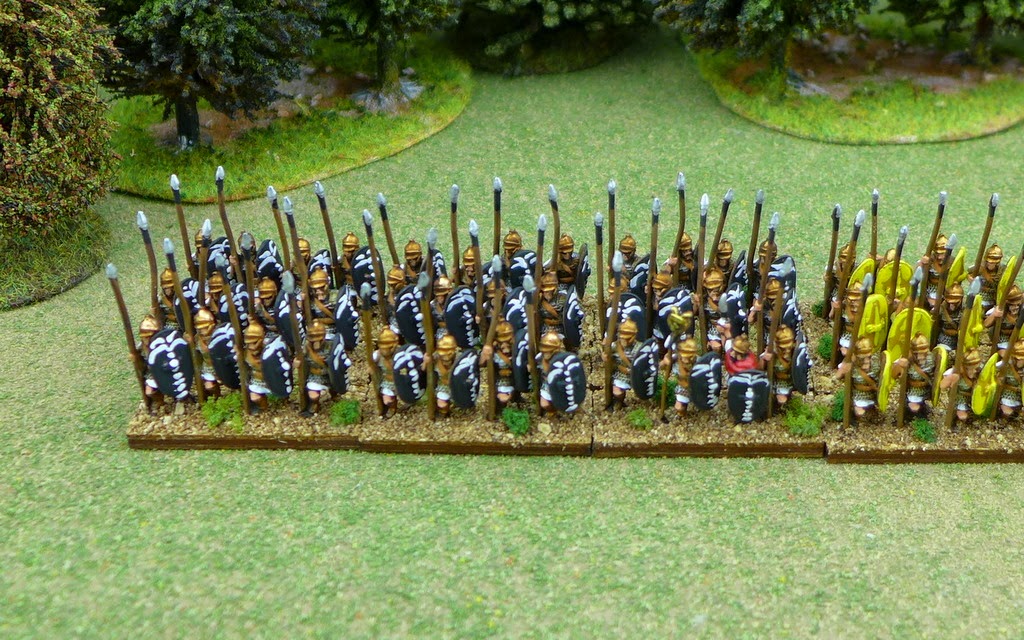 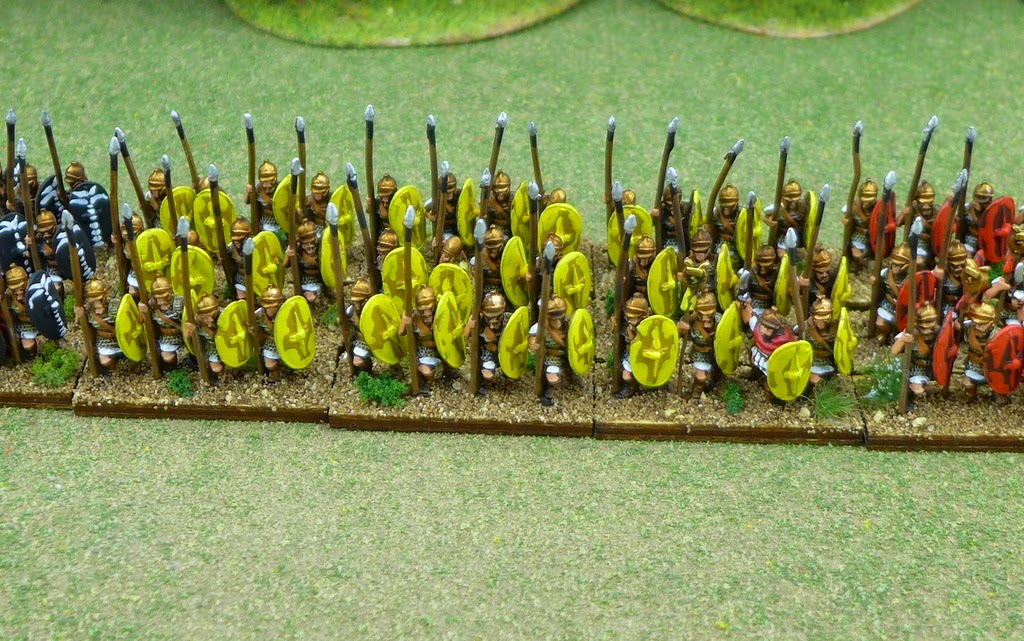 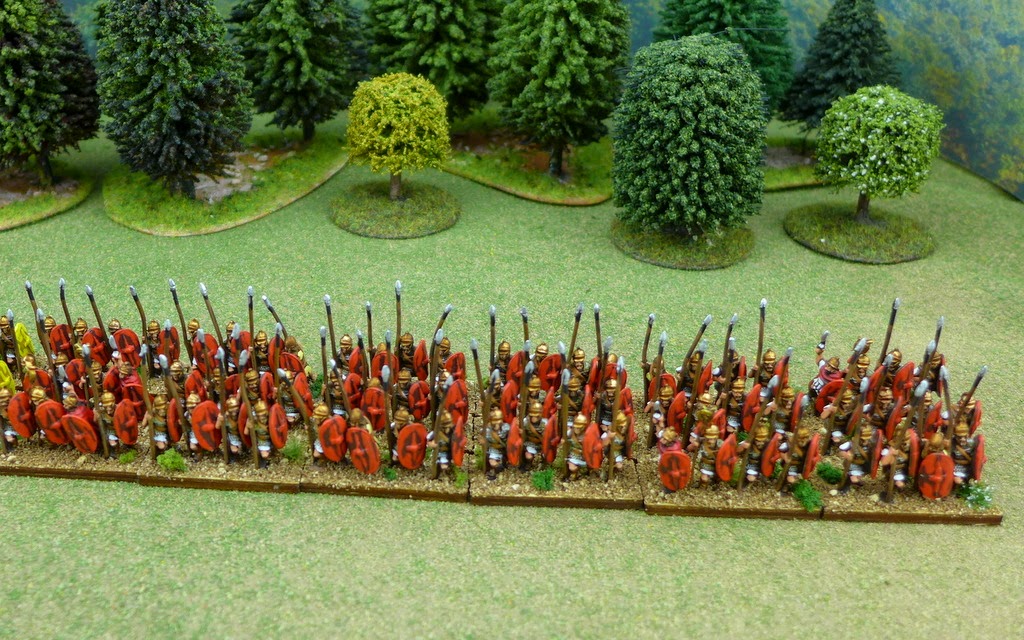 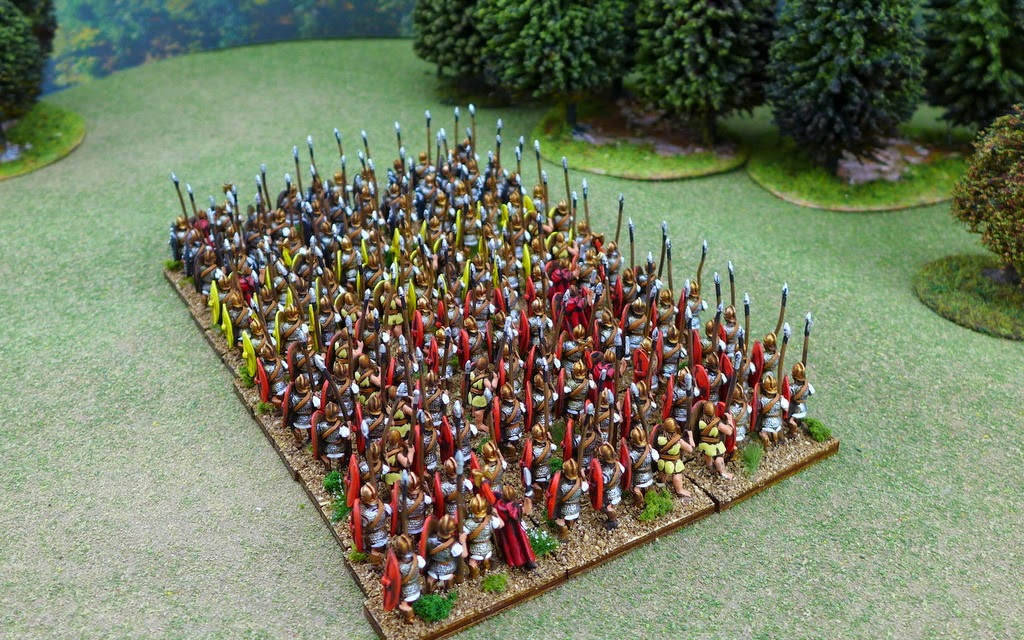 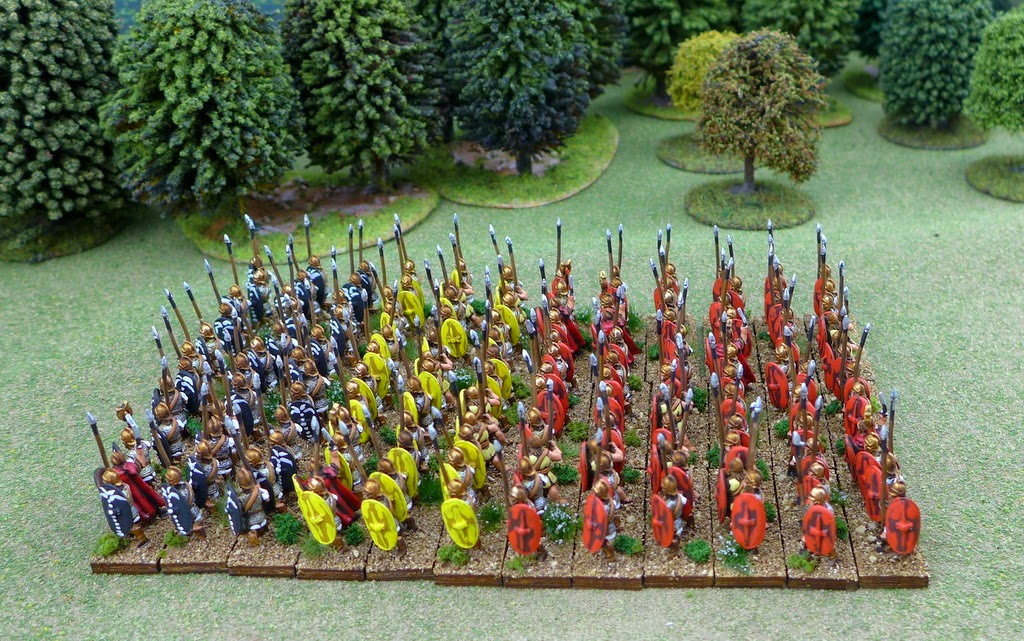 Carthaginian Heavy Cavalry: They'll lock up the Roman Cavalry to the front while their Numidian allies ride around to the flanks and rear. 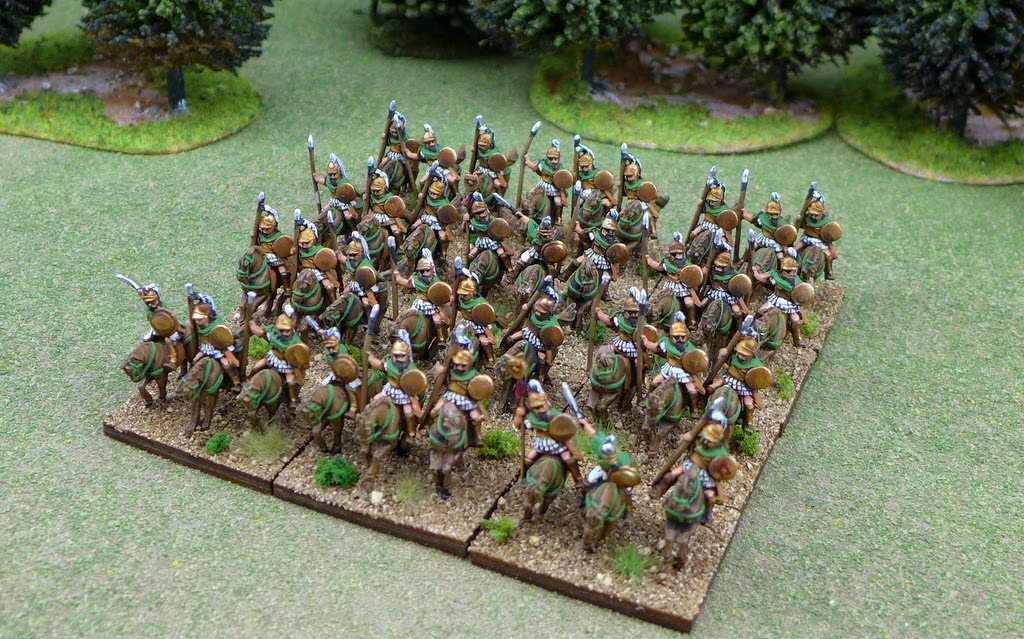 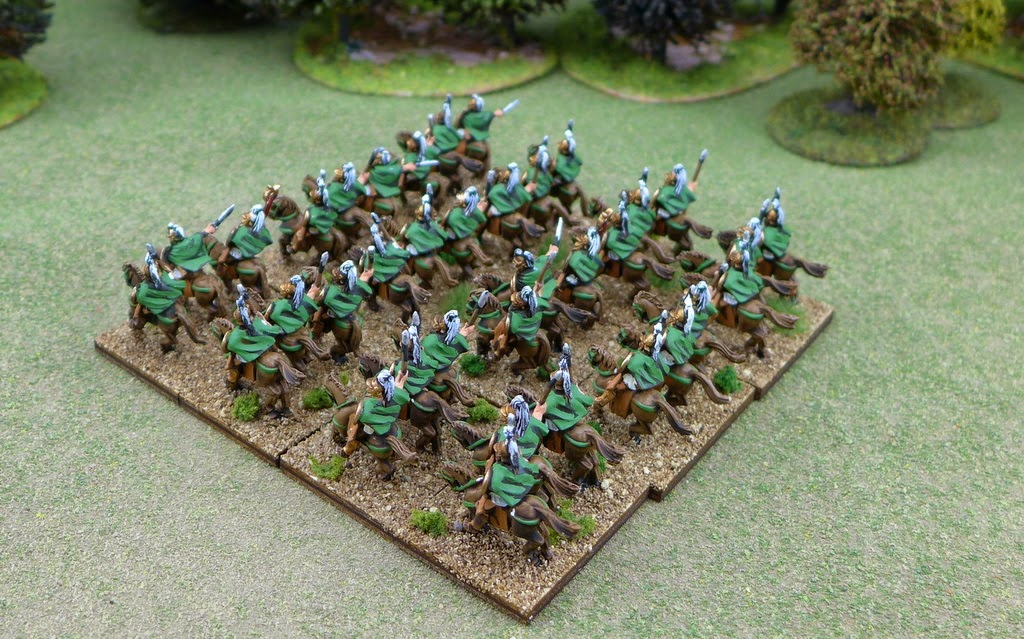 Libyan Javelinmen & Balearic Slingers: Few though they are, they'll tie up the enemy skirmishers. 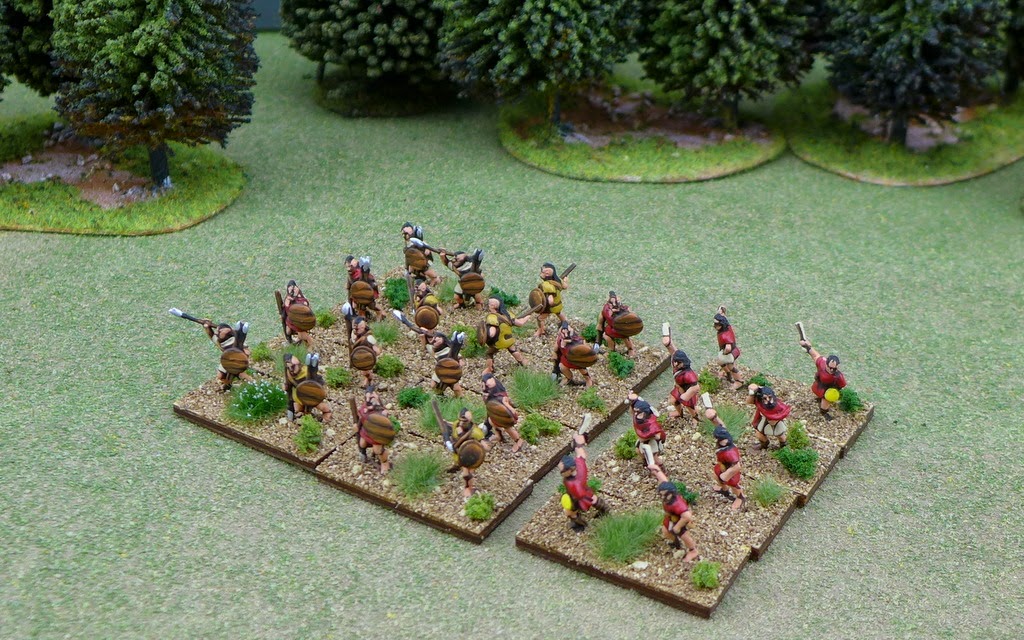 Up next is the Spanish arm of Hannibal's army.  The Spanish are my favorite War & Empire sculpts. As is traditional with the ancient Spanish, you can have a bit of fun with bright colors.

Round Shield Cavalry: The Spanish lights are a colorful bunch.  Even if they don't win in skirmish, they'll look marvelous riding around on dressed up ponies. 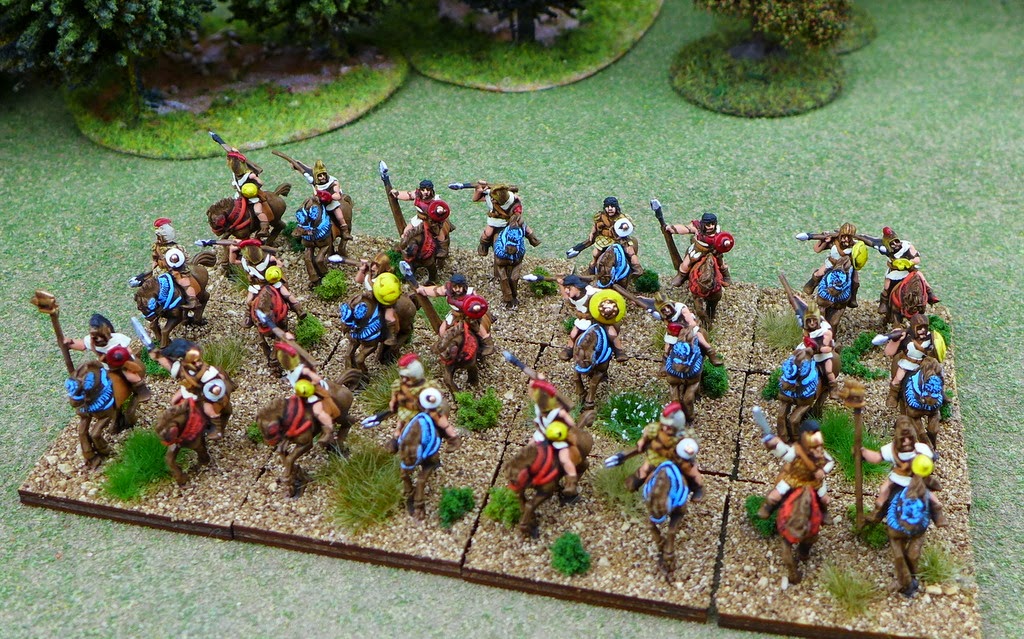 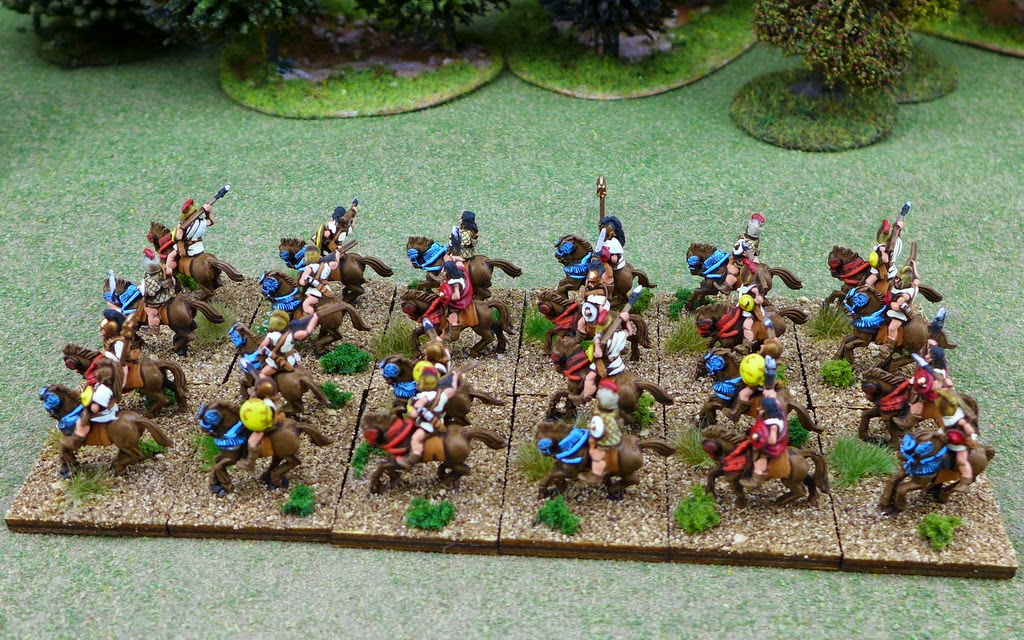 Long Shield Cavalry: The heavies are ready to rumble! 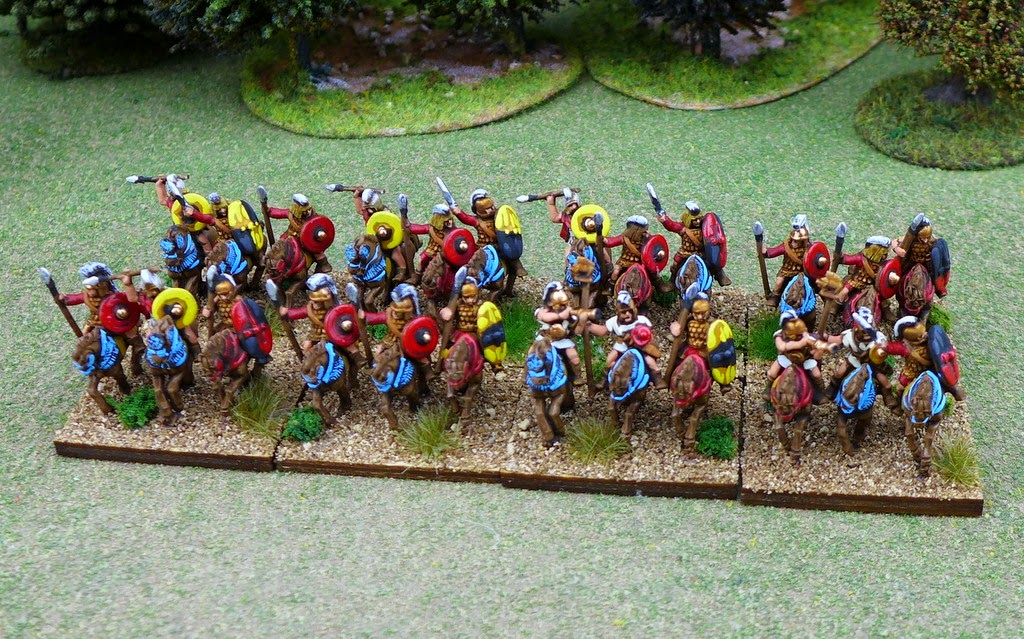 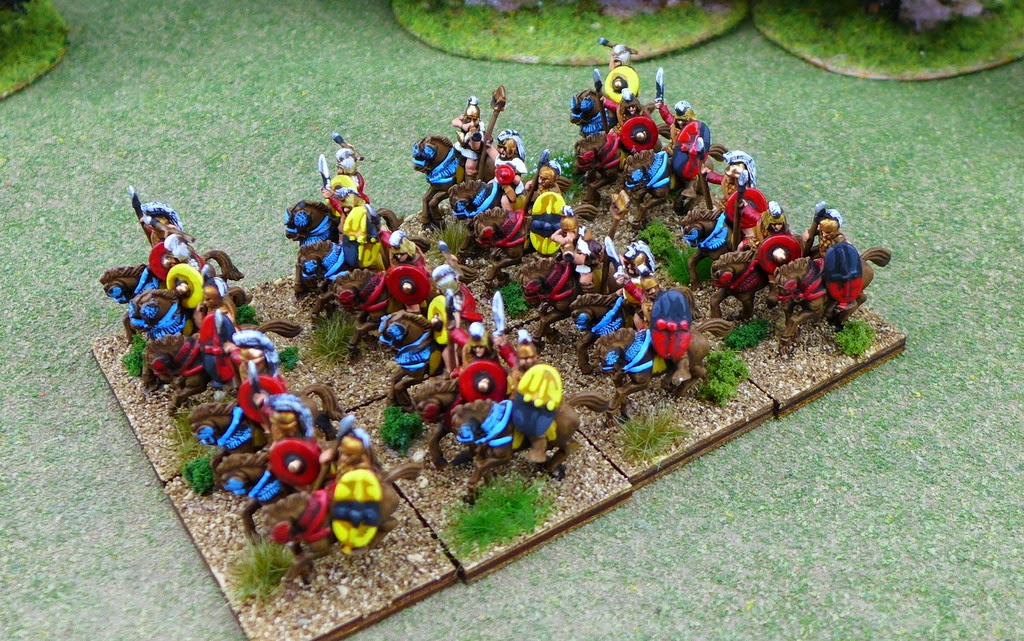 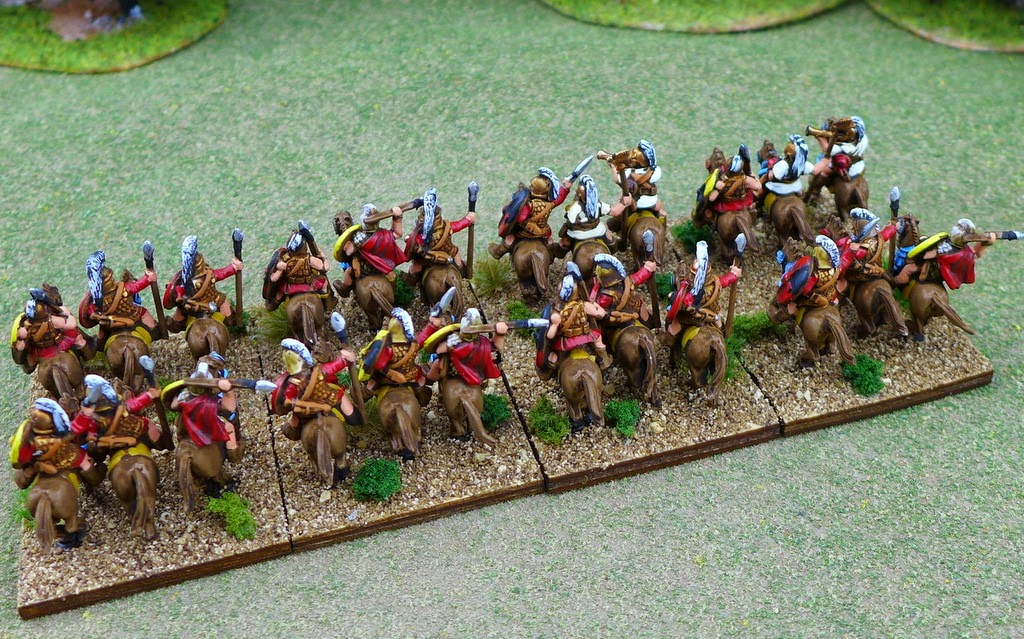 Heavy Scutarii: They'll challenge the Roman Legions in the open ground and on a good day,  maybe even push them back. 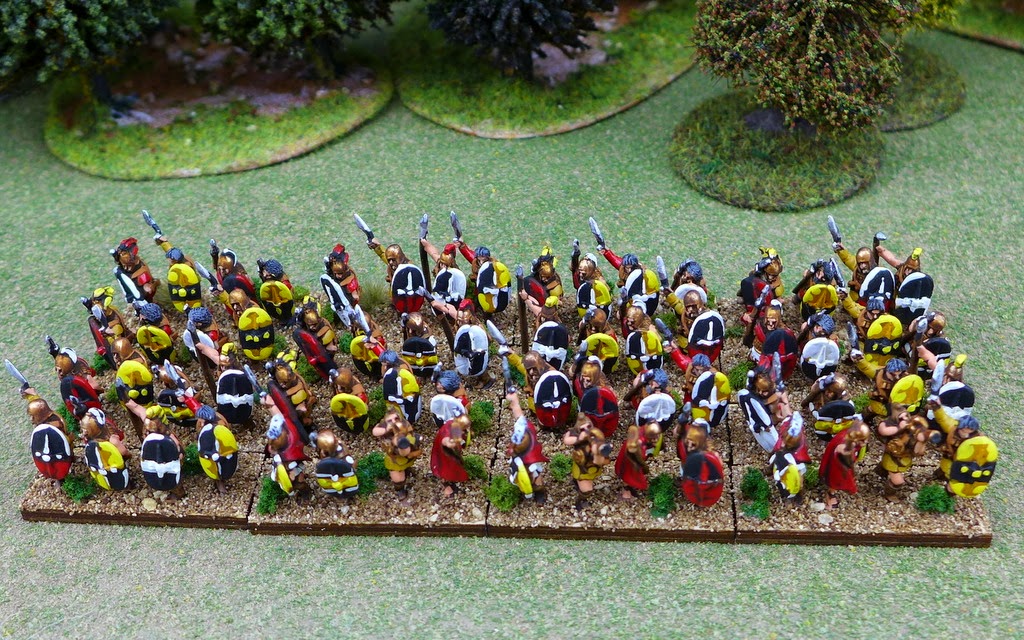 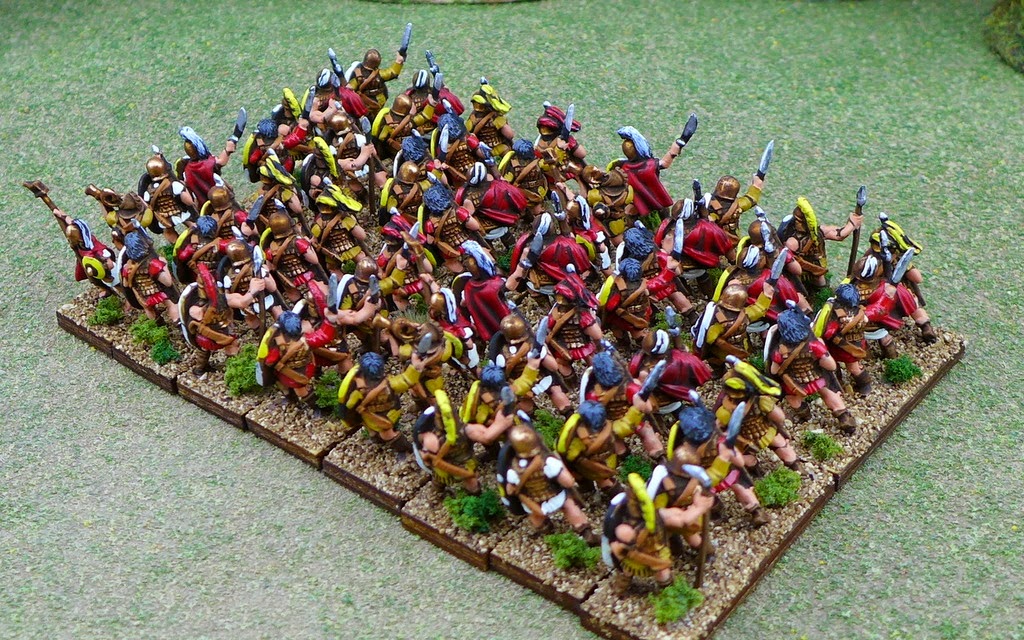 Spanish Slingers: Because you can never have too many skirmishers. 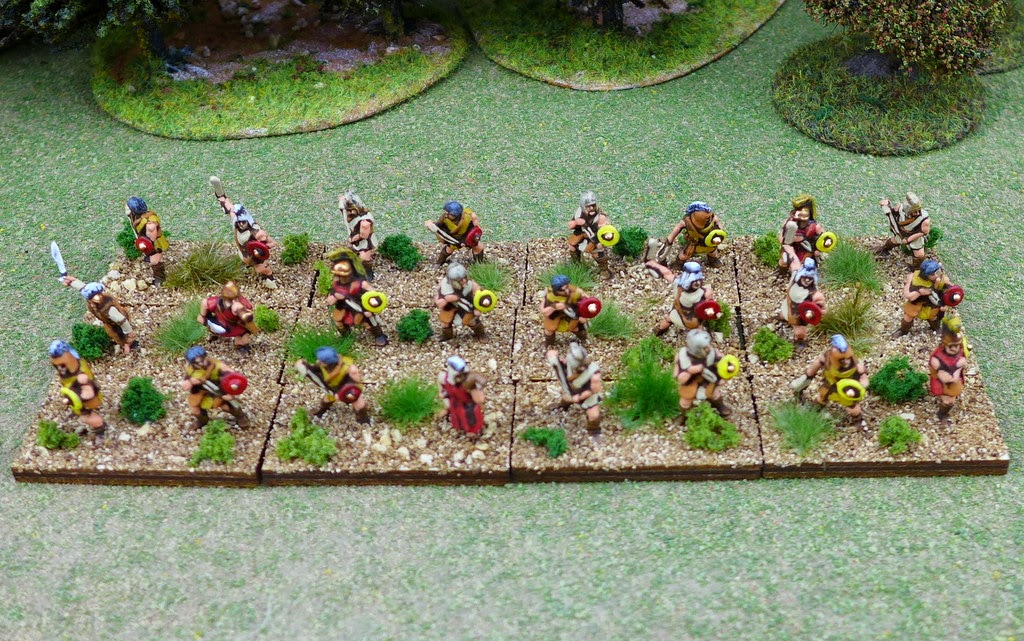 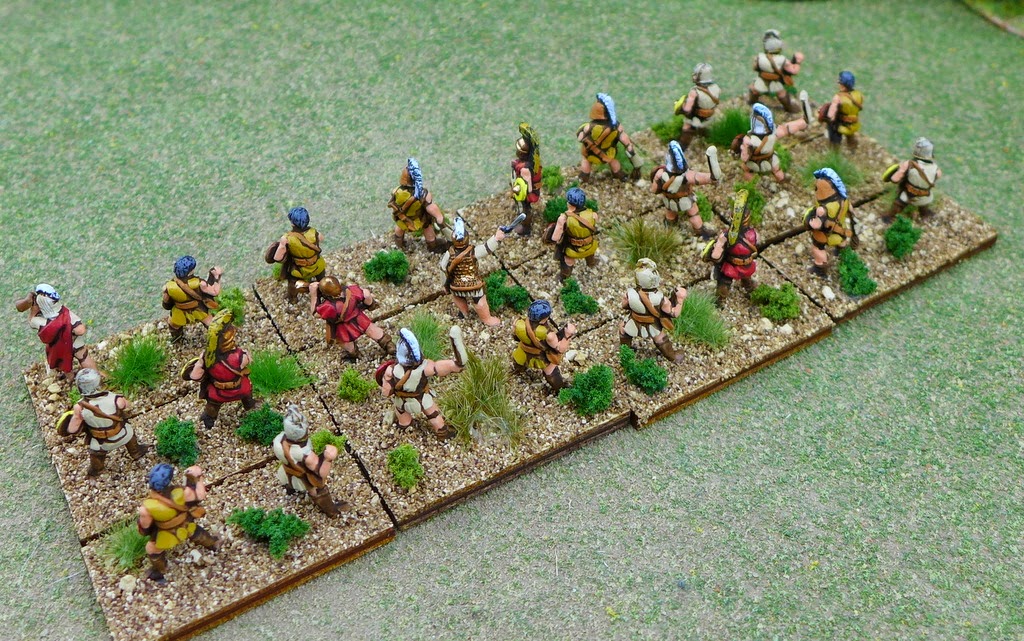 Medium Scutarii:  The nice thing about basing 3 figures per base to represent medium foot is the lads get to have a bit of elbow room. 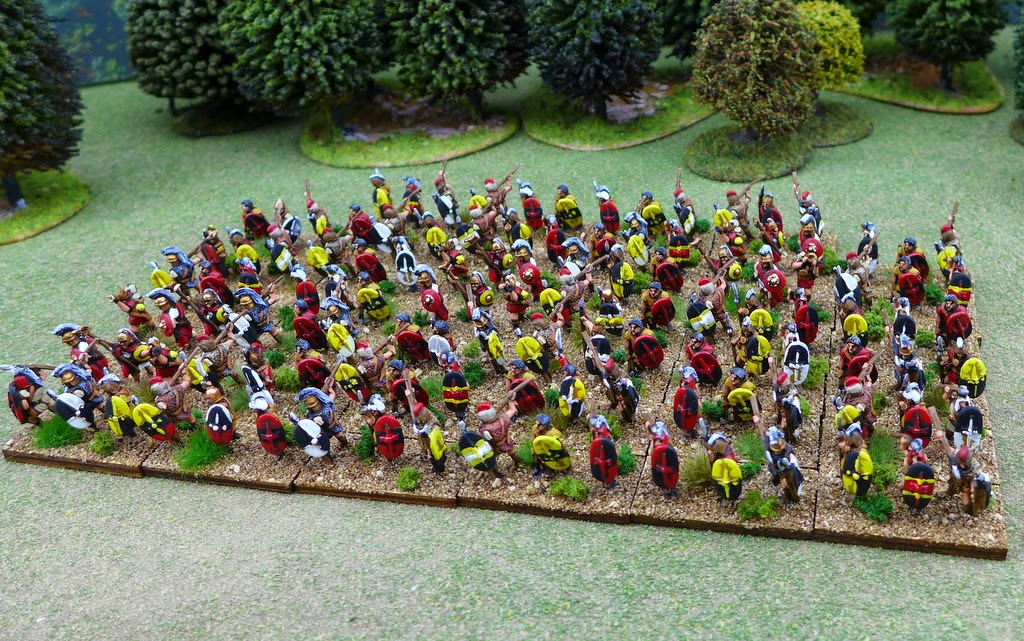 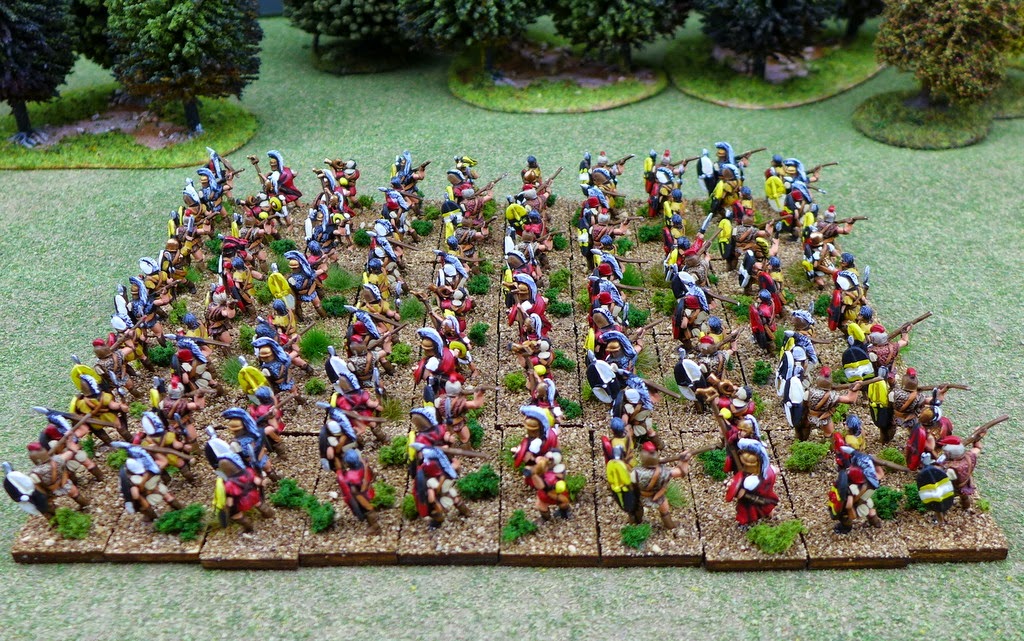 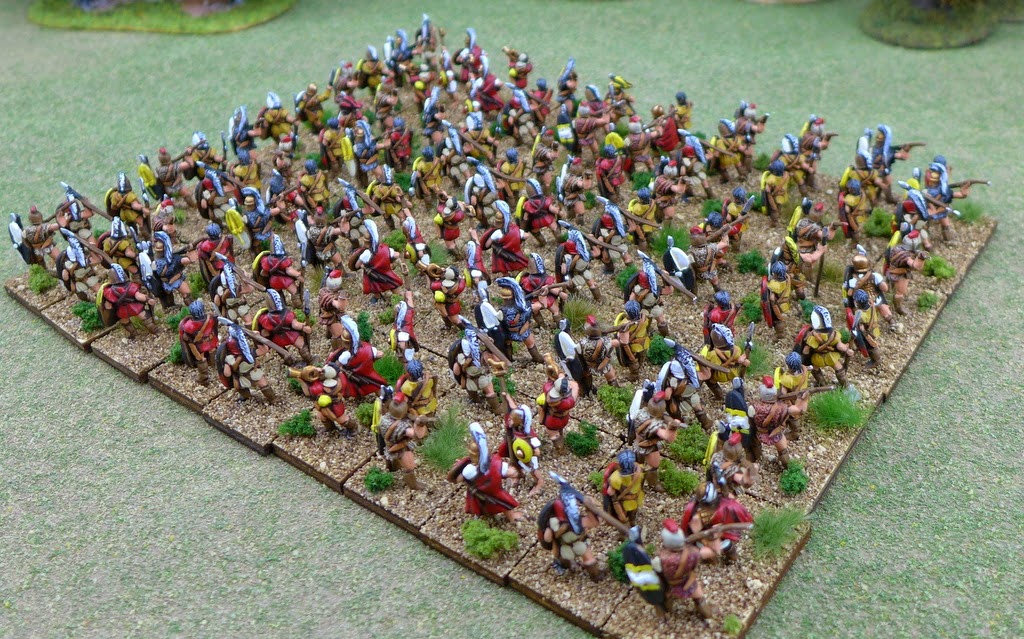 I can check "paint a lot of figures in a short period of time" off my bucket list. If you're looking to paint up ancients in 15mm, take a look at the Forged in Battle collection. We lost Covus Belli's ancients months ago so its a relief to see West Wind step into the breach.  Along with a deep bench of armies, they have great color items up on the builds accessories page.  Things like engineers, villages, villagers, temples, ramps, siege towers battering rams and more!

I'll  be on the road shortly. A little rest for the eyes and then, back to it with SAGA and Bolt Action projects.
Posted by Monty at 4:57 PM 41 comments: