Saturday's game featured a Carthaginian versus Roman showdown with each of the 4 players fielding a 650 point army. Battle was fought on a 9' x 4' field.  The terrain set up turned out poorly for the Romans, with their center attracting a gully, open field, village and a plantation. The upside was the Roman village did look awfully nice!

I ran a Later Carthaginian army, loaded with elephants.  My teammate Klay ran Early Carthaginian, loaded with heavy chariots and the Sacred Band. We concentrated our African Spear in the center of the table with orders to hold in place. On our right flank, I planned to push forward and meet the Romans head on. On our left, Klay aimed to swing wide around the Roman flank and bend their line back, hoping to create gaps and opportunities for flank attacks.  The battle was shaping up to be another demonstration of Roman quality versus Carthaginian quantity. 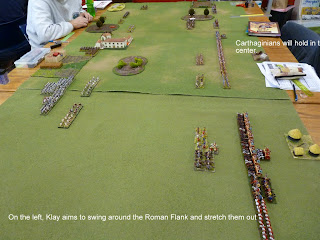 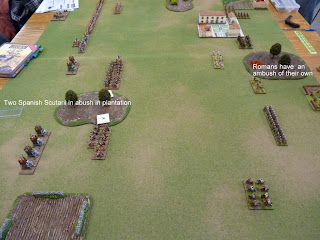 The early game progressed well for Carthage, with our right and left flanks advancing sharply.   In the center, Mark struggled to move his legions and medium archers up due to the village and gully.  The wall of Carthaginian chariots and cavalry presented the Romans with a challenge. What would they do in the face of Klay's flanking movement? 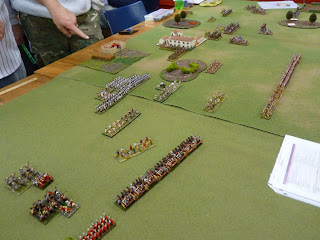 Two units of my Numidian light horse caught and ran down Roman slingers.  During the pursuit, my Numidians Light Horse discovered Lanciarii in ambush in a plantation.  The Lanciarii charged and succeeded in running down one of my light horse from behind.  In pursuing the broken horse, they  forced my 2nd battlegroup of light horse to evade through my elephants, disrupting them! 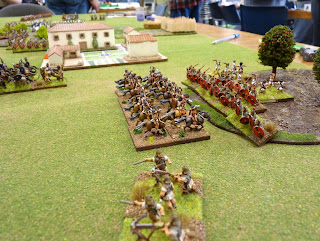 Luck was with me on this day because my Elephants managed to fight the Lanciarii to a draw and then subsequently rally out of disorder.  The Elephants proceeded to win in subsequent turns and broke the Lanciarii, sending them back to join the routed Roman slingers.  While the Lanciarii and Elephants battled it out, two legions advanced into what would turn out to be a trap. 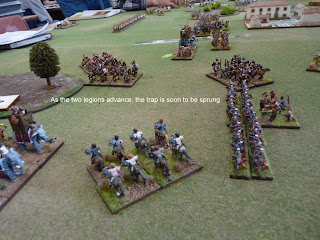 The Scutarii trap is sprung.  Elephants moving up on the right, Scutarii in the center and just out of sight, another unit of Scutarii coming up on the left.  With only 2 legions to face down enemies on three sides, this did not end well for the Romans. 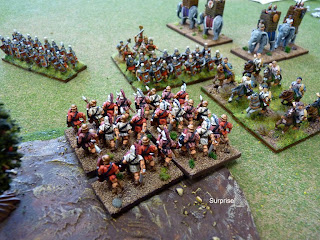 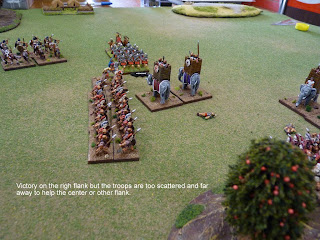 Meanwhile, Mark's Romans advanced relentlessly on our wall of African Spear in the center, disregarding our superior numbers.  And for good reason, apparently, as one unit of Spear broke from bowfire alone!  In melee, a legion broke a second unit of Spear and just like that, our center was crumbling and now in doubt. 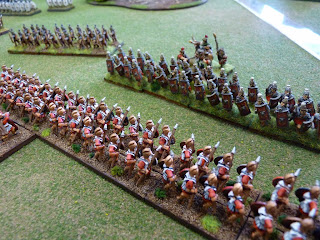 On the Carthaginian left flank, nothing went quite like it should have.  Brandt skillfully deployed his legions and countered Klay's every threat. By game's end, my partner had failed to eliminate a single Roman base or break any units. His chariot charges failed as did a charge and melee by the Sacred Band! 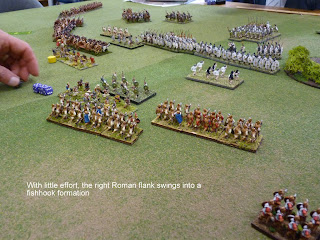 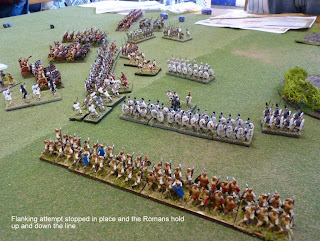 At the finish, we scored the Carthaginians as up on the right flank, Romans up in the center and Carthaginians neutralized on the left flank.  The 6 bases of elephants were key on my front.  They are faster than heavy foot and in melee, they neutralized the Roman advantage in armor and superior sword skill.  Then again, its easy to shine when you have the rare fortune of catching your opponent in the flank.
This is as good a point as any to rest my Carthaginian army. I have 3 other armies to play, one of which has never seen the tabletop. I'm planning to fast forward 1700 years and run my Later Ottoman Turks at our next meet.  After getting slapped around by Roman Medium bowmen, I'm looking forward to running my Janissary Medium bowmen.
Posted by Monty at 1:21 PM