Romans to the front, allies to the rear

Plans to field my Ottoman Turks today were delayed due to a lack of medieval opponents. Instead, I brought out my Mid Republican Roman army for the very first time. To get in the Roman spirit,  I'd planned to bring a chaise lounge down to the Source and bark commands while reclining & dining on de foie gras and bacon. Then I remembered that I don't have a chaise lounge and my wife ate all the bacon.

To demonstrate my Roman cunning, I settled for giving my opponent Al a chair slightly more uncomfortable than my own.  Al brought his brand new Carthaginian army and the question on everybody's lips was, could Monty possibly lose as the Romans?  The fact that everybody asked me this question before the game was not an encouraging sign.

The initial setup presented me with a problem.  I had a large farm field in the middle of the table to contend with.  Roman legions do poorly in anything but open terrain.  Marching a legion through the farm field would delay my entire line of battle so I decided to deploy my Italian Allies in the center.  Being Medium Foot, my Italian Allies had the ability to move and fight with impunity in uneven terrain like a farm field. Unfortunately, they were also my weakest units. 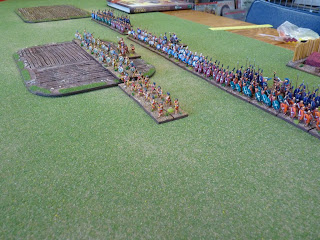 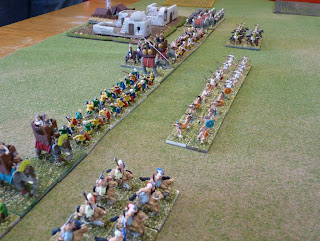 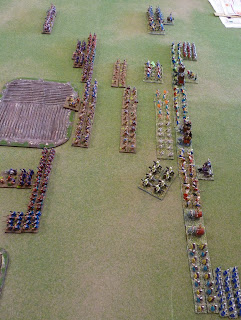 As I launched a vigorous advance on the Carthaginian line, I had a feeling of disquiet about my center.  I didn't have any reserves or units providing rear support. Then I remembered the Battle of Cannae and how Hannibal purposely put his weakest units in the center of his line.  Worse comes to worse, I could conduct a double envelopment of the Carthaginian center with my strong right and left flanks.  Riiiiight...
Al's center was composed of Gallic foot and elephants and he decided to send them in once I came within charge range, which was just as well as the impetuous Gauls are unlikely to listen to a general's orders to stand fast in the face of the enemy.  My Italian Allies crumpled on impact and crumpled too were my plans to conduct a double envelopment.   I now understand Romans reluctance to grant full citizenship to their Italian Allies in the Republican era.  Nifty shields and great hair but they can't fight worth a darn.

With my center evaporated, the battle devolved into a series of small actions.  Al's elephants proved effective against my legions. Against all odds, one battlegroup of fragmented elephants managed to grind down and then break the Hastati to its front.  With that, the battlefield became a chaotic swirl of units ebbing in every direction.  My camp was sacked and enemy roamed with virtual impunity behind my lines.  The battle ground on and on with neither side yielding. Finally, with each side's army a single point away from breaking, one of   Al's units broke and the game was called.

1.  Don't put your weakest unit(s) in the center of your battle line.  Put them on the flanks or in reserve where they can't cause too many problems.
2.  Cretan Archers are expensive but fantastic.  They had a hand in breaking two battlegroups.
3.  You can only deploy 16 bases of Upgraded Veteran Legionaries in the Mid-Republican Roman list.  Arggg!  Reading fail on my part!  My list had 24, which means the match goes to Al!

Other matches today included Bruce's Byzantium army versus Clay's Teutonic Knights.  Unfortunately, a flank march with the Knights did not come off properly, contributing to the game going to Byzantium. 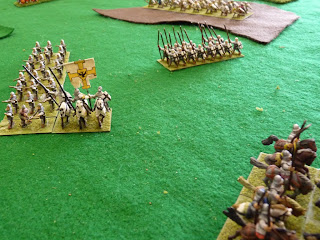 Bruce put a brand new Numidian army on the table against Klay's Pontiac army.  I was curious to see how 32 bases of Numidian Light Horse made out.  The short answer was not very well today as Klay had the hot hand and the victory by day's end.