At the finish line, I realized I didn't have any naked Gallic commanders so I put in an order for Xyston Gaesati.  The Xyston figs are a touch bigger than the Old Glorys but they seem to mix well enough. I love painting Xyston and considered doing this army with their figs, but .75 a figure is spendy for a large 15mm army.  If I were to paint Gauls again, I'd use the Blue Moon line.

Now, about the fellows with clothes.  Other than Lady Godiva, horseback riding and nudity don't mix well. It's also possible that the fellows with pants suffer from a condition known as "never-nude."  Lastly, the historical accounts of Galatians fighting naked says "all but the tribal leaders generally fought naked." There you have the truth of it.  Even in 250BC, management preached from the "Do as I say, not as I do" gospel. Some things haven't changed in 2,000 years! 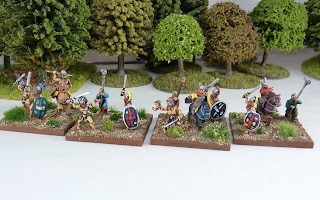 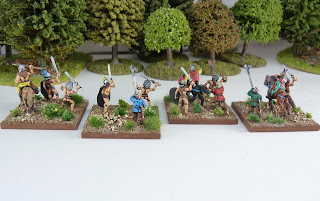 The Gallic camp is composed of an Essex cart, Old Glory civilians, a Splintered Light dog and a Xyston Gaul.  It was a full-on sweep of my shrinking ancients pile. 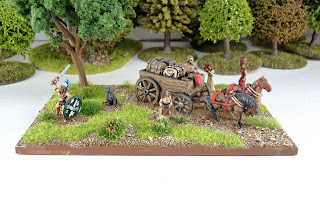 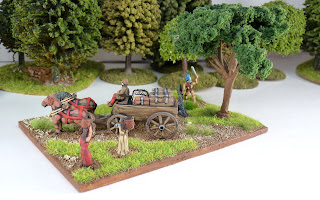 I can't wait to bring the Gauls down to The Source for a game.  I don't expect to win but I do hope there'll be a good amount of walk-up traffic and comments.  When I'm losing badly, those visits can be the best part of a game. To put it another way, my friend Klay once said, "Monty loses a lot but his armies always look great running away!" 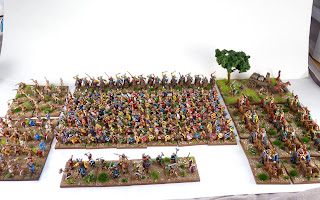 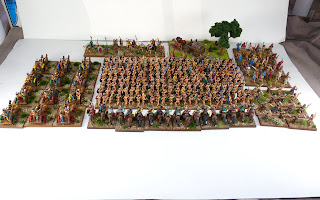 Saturday is the local ReCon in Coon Rapids.  I plan on going early and staying late for a full day of gaming. Last time I went, a fellow introduced himself by saying, "Aren't you the guy who keeps the Twin Cities Gamer blog?"  I almost fell over from surprise to meet someone reading my blog AND recognizing me from my avatar. If you're a local reader and you're going to be at ReCon, look for me at the Saga tables. And game on!
Posted by Monty at 4:21 PM