With my 28mm lead pile depleted, I've been working on 15mm projects. First up is a Dailami army for Field of Glory. The Dailami were highly prized mercenaries who served the Sassanids, Samanids, Buyids, Fatimids, Saftarids and Ghaznavids and later the Seljuks until the end of the 12th century.  That means these fellows can be ported into many other lists. The Dalaimi were the premier Islamic infantry of their time, earning praise from their enemies. Their standard arms were a sword, a brightly painted shield and a javelin. They also used axes and bows as well. While they usually were equipped with round shields, teardrop shields came into use when they were employed by the Fatimids. 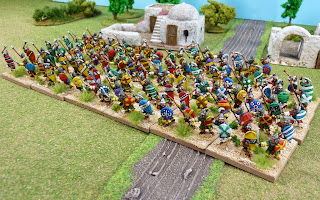 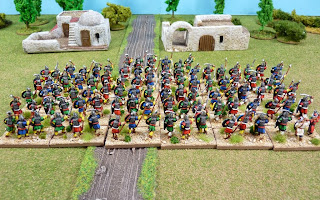 I used the Old Glory Syrian warrior line because the figures come with chainmail, a good mix of weapons and shields.  You can see from behind I kept the tunics to blues, greens and reds. A poem from 1048 described the Dailami shields as "similar to a wall and painted in 100 colours."  I didn't hit 100 but I did use a lot of colors here. 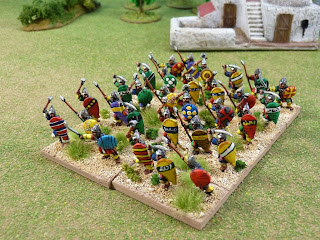 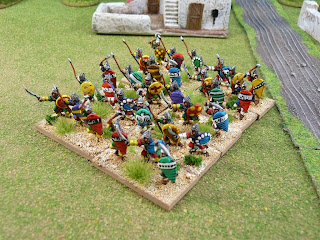 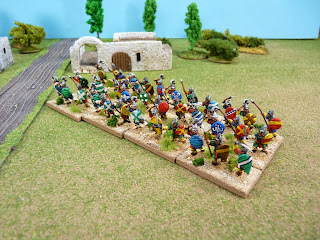 I'm taking elephants in my Dailami army, of course!  I used Old Glory Sassanid ellies, filing down the bulbous helmets and using greenstuff to create turbans. 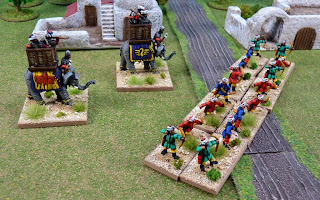 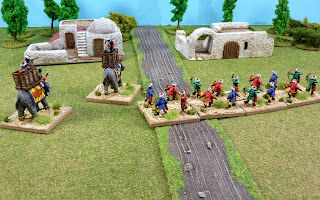 Bedouin Light Horse and foot in black.  Black is tricky to pull off in 15mm so I used 2 rounds of gray highlights. 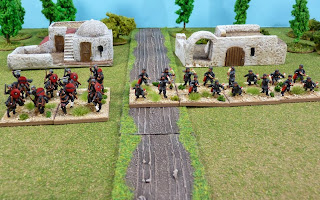 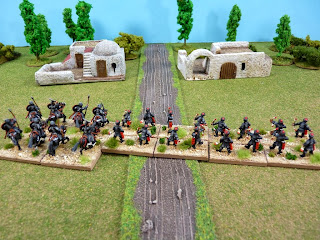 4 command stands rounds out the lot. 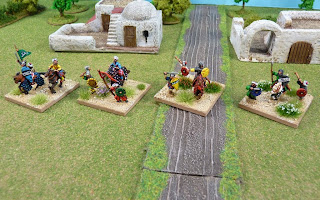 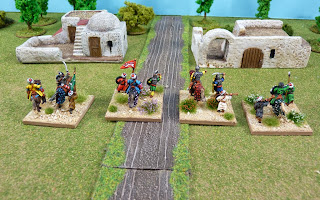 I still need to paint up Ghilman, Kurdish lancers and a camp. I've got lots of Arab cavalry I can substitute in until I get back to this project.  This gets me just enough to be able to bring the Dailami to the tabletop.

This post has run quite long but I'd like to share a account of what made the Dailami special.  They were described as "all foot-soldiers, each man carrying a sword and a shield and three javelins in his hand" and as exceptionally nimble in mountain country. Agathias described the Dailami in the context of a night attack and ambush: "The Dailami are among the largest of the nations on the far side of the Tigris whose territory borders on . They are warlike in the extreme and, unlike most of the Persians, do not fight principally with the bow and the sling. The carry spears and pikes and wear a sword slung across one shoulder. To the left arm they tie a very small dirk and they hold out shields and bucklers to protect themselves with. One could hardly describe them simply as light armed troops, nor for that matter as the type of heavy infantry that fight exclusively at close quarters. For they both discharge missiles at a distance when the occasion arises and engage in hand to hand fighting, and are expert at charging an enemy phalanx and breaking its close-knit ranks with the weight of their charge. They can reform their own ranks with ease and adapt themselves to any contingency. Even steep hills they run up without difficulty thus seizing in advance all points of vantage, and when they are put to flight they escape with lightning rapidity whereas when they are the attackers they press the pursuit with perfect timing and co-ordination. Well-versed as they are in practically every type of warfare they inflict considerable harm to their enemies. They are accustomed for the most part to fight alongside the Persians, though not as the conscript contingents of a subject people since they are in fact free and independent and it is not in their nature to submit to any form of compulsion."

It sounds like they were, after all, THE premier Islamic infantry of their time!

Email ThisBlogThis!Share to TwitterShare to FacebookShare to Pinterest
Labels: Dailami, Field of Glory