Dacians, a warband you don't meet every day

I'm painting up a Dacian army for our next Field of Glory (FoG) campaign.  Me falling for another lost cause is a bit predictable. "Barbarian" armies fare poorly in FoG but that doesn't stop me from falling in love with a new one every year. I loved the story of Sertorius in Hispania so I painted Lusitanians.  I loved the stories of the Celts and painted 3 Gallic armies to prove it. While most of the Dacian's story is lost to time, what's left is riveting. That's how I knew that it was true love! Let's hope it's a love that lasts.

I'm using Old Glory figs for my Dacians.  OG doesn't post pictures of all their ranges on their website so I was reluctant to put an order in.  Out of the box, I was pleased to see the Dacians are one of their better lines. The figures are well sculpted with lots of variety.

Dacian Falxmen:  Dacians can field up to 24 bases of falxmen in FoG so I painted up all 24. The downside is that they're unprotected Medium foot.  The upside is they're cheap as chips for superior foot with a heavy weapon.  If they survive the impact phase with legionaries, they'll be even in subsequent rounds of melee. Watch the face of your Roman opponent as you trade bases and he remembers falxmen cost 7 points a base and legionaries cost 14!

The falxmen were primed with Army Painter Brown Leather followed by block painting in an earthy and tight palette. Vallejo's sienna wash went over the base coat. Vallejo's wash is currently my favorite as it goes on thick and stays put. The last step is applying highlights. For shirtless fellows, I used 2 rounds of highlights on the skin as it did make them pop.

So about that backstory, the Dacians were a collection of up to 15 tribes in what is now Romania.  Located in and around the Carpathian mountains, they possessed abundant mines and resources, including hordes of gold.  In the lectures "Rome and the Barbarians," the Dacians are described as skilled stonemasons, metal-smiths and miners.  All 3 skills were crucial in their wars against the Romans. Their kingdom lasted from 82 BC until the Roman conquest in 106 AD.

The story goes hot when King Decebalus assumes the throne and unites the tribes. Cassius Dio described him as  "a man shrew in his understanding of warfare" who "judged well when to attack and chose the right moment to retreat."  His raids across the Danube and into the Roman province of Moesia culminated in the Roman Governor Oppius Sabinus being killed in the field.

Emperor Domitian and his Prefect of the Praetorian Guard, Cornelius Fuscus, traveled to Moesia to put things right.  Fuscus drove the Dacians back across the Danube and followed them through the Iron Gates. At the First Battle of Tapae, he was ambushed along with Legio V Alaudae. The legion was annihilated and Fuscus killed. The Dacian king received his name Decebalus after this battle, meaning as strong (or brave) as ten men.


Domitian launched a second expedition in 88 AD.  According to Dio, the Dacians slew a great number of Romans while suffering serious losses themselves.  Facing multiple threats, Domitian offered terms that were stunningly generous. Decebalus became a client king of Rome with a stipend of 8 million sesterces per year. He was also provided Roman engineers, craftsmen, and war machines. Decebalus used the Roman stipend and engineers to build new defensive fortifications in the mountains and to reinforce existing ones.Clever man, that Decebalus, as the Romans wouldn't let him rest after such generous terms. 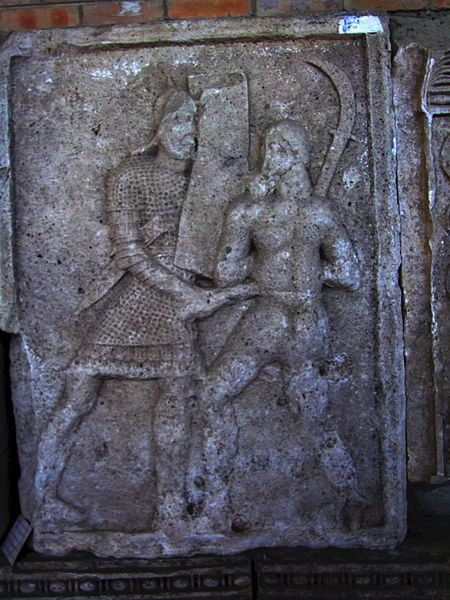