The Sultan steps up

I finally got my Later Ottoman Turks on the tabletop against Al's Later Serbian army today.  Al's girlfriend Genna was co-running the Serbs and they made a great team! I couldn't help but notice more people approached us about our game than usual.  Coincidence?  I don't think so!

The Serbian army was knight heavy with cavalry, loads of lancer armed light horse and a single foot unit of medium archers.  My army was built around Janissary with a good deal of foot troops in support. I knew that if I didn't play this carefully, Al would roll me right off the table. My first break came when I won initiative and was able to select Hilly as my terrain choice.  I put down 2 brush and 3 steep hills to give my foot troops somewhere to hide from Al's knights. 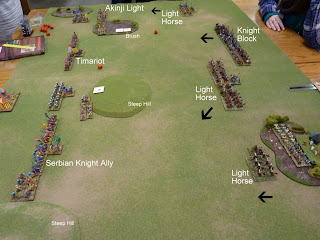 Al put his knights down in the center.  I knew I'd get overpowered there so I deployed heavily on the flanks and left a screening force in the center.  In the early game, all the action was on the flanks while the knight block contemplated its options.   I pushed my Janissary up to secure the brush on the left flank and the steep hill on the right.  I was hoping that the difficult terrain would make it impossible for Al and Genna to send  knights in against them.  I hoped to pour archer fire down into the center of the board or in the alternate, support my left and right flanking maneuvers. 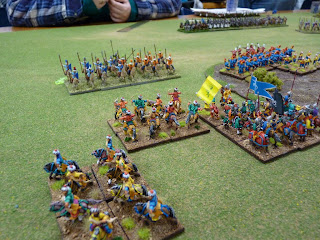 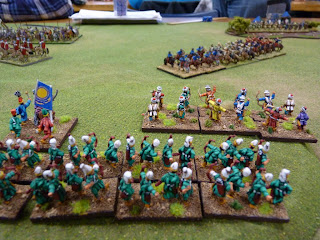 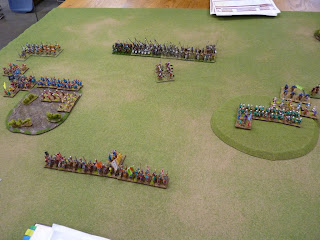 One of the great things about this Ottoman army is that everything except the Serbian Knights and the camp shoots.  For the first half of the game, I couldn't hit anything.  I did make good progress pushing both the left and right flanks out.  I realized if I ventured too far out, the Serbian knight block would crush me.  That's why I was content to stand pat on my left flank with a defensive line built in the brush. 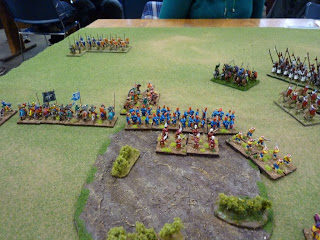 On my right, I pushed forward into his Al's Light Horse. With my knights in tow, it was slow going.  Even worse, lance armed Serbian Lights chewed through a battlegroup of Akinjis in a single turn and then sacked my camp. Ouch!  4 quick points to my opponent! 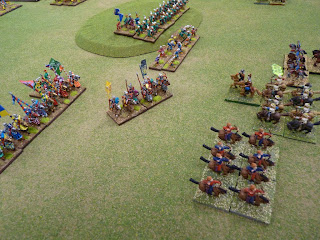 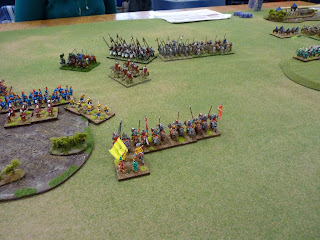 Al saw an opportunity and pitched into my left flank in the brush.  His lance armed Serbian Lights went into my Janissary Handgunners and a block of knights went into the Janissary medium foot (in blue). The poor terrain and some good dicing on my part resulted in a flurry of disrupted markers for the Serbians.  While I could not hit a thing in the first half of the game, my archery fire was accurate in the second half. 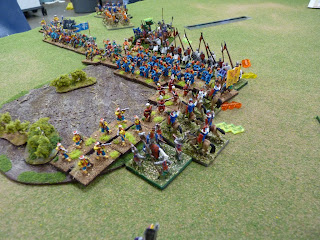 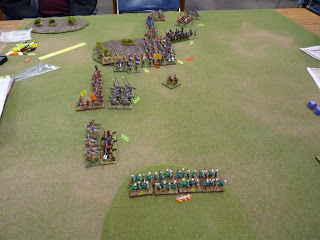 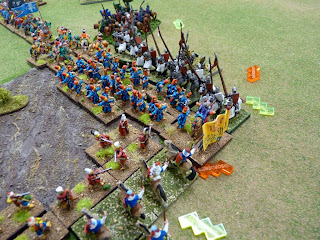 At a crucial point, my Janissary wavered and went disrupted. I then lost badly in melee and had to make a morale check with a death roll.  I needed a good roll with higher being better. 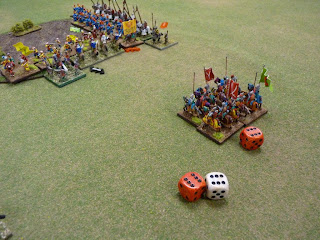 Yes!  At turns end, the Jannisary rallied back from disruption.  The knights were neutralized and the Lights broke. On the far right flank, I'd pushed through the light cavalry screen and was a turn away from sacking the camp. Game called with my very first win with the Turks! 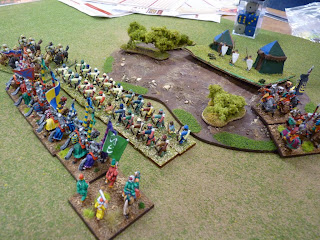 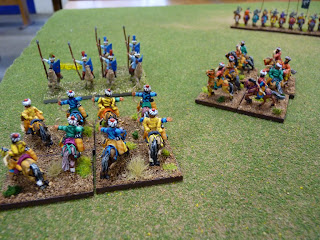 This fast-paced game was a complete change of pace from running my Gallic or Carthaginian heavy foot armies.  It was interesting enough that a couple of people pulled up chairs and watched the second half.  It was also by far the best game I've played and of course it didn't hurt that I made some good rolls.  I'm really looking forward to throwing my Turks against Scott's Mongol horde and eventually, my in-progress Hungarian army as well.
Posted by Monty at 10:50 PM