Paphlagonian Foot:  The of was situated on the Black Sea coast between to the west and to the east.  The weakness of the kingdom drew the attention of her two neighbors.  Mithridates of Pontus allied with Nicomedes of Bithynia and the two agreed to invade their mutual neighbor.  This drew the attention of , who ordered a withdraw and planted the seeds of the Mithradic War.   Mithradates occupied Paphlagonia until the end of the first First Mithradatic War, when he was force to give up his claim to the territory.

In Impetus, these Light Foot are part of the many javelinmen units that make up the Pontic army.  I took the liberty of replacing their wicker shields with Hellenistic ones.  I don't think this was much of a stretch as it was reported that Mithridates used his enormous wealth to kit his army out very, very well.  The stories of his wealth trickled back to Rome and helped incite a rush to be the first to invade and sack Pontus.


I'm quite pleased with the vertical basing!   The process of creating these hills is incredibly messy due to the DAS air drying modelling material I used. It stains your hands and any surface it touches terra cotta.  And I have to soak it a bit to get it malleable.  At the art supply store, I found racks and racks of oven curing clay but almost no air drying clay.  Desperate, I picked DAS, which turned out to be a dog.  If you're going to try  vertical basing, find a good quality air drying clay and then let me know the brand so I can throw my DAS away!

For the tufts and white flowers,  I used Silfor Prairie Tufts 4/6mm Summer and Late Summer blossum tufts from Scenery  Express.  It was a bit pricey initially as I bought 8 packs of various colors and heights but these tufts go pretty far in 15mm. 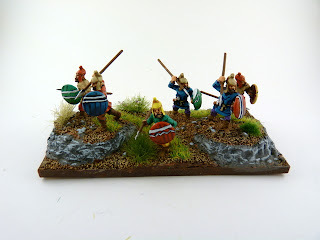 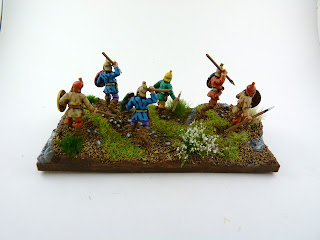 Arachosian Horse:  I needed javelin-armed Light Cavalry for the Pontic army and given the wide mix of troops employed, I grabbed these figures from Xyston.  You could just as well use Thracian or Greek javelin armed Light Cavalry.  Being an ancients gamer and painter is quite liberating and I played it to full effect here! 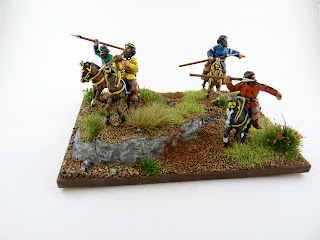 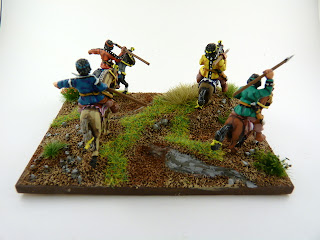