For those of you who've been following this blog for awhile, you'll recall that I once had a habit of eating my dessert before dinner.  While my wife has broken me of this particular bad habit, I do still have a tendency to pick out my favorite figure(s) and paint them up at the start of a project rather than at the end as logic dictates.  And that's why the Scythed Chariot is up first!

Despite the fact that chariots had not dominated a battlefield since the 4th BC, Mithridates set about building and training a force of 130 scythed chariots in anticipation of his upcoming war with Rome.  These chariots were used in 3 battles during the first Mithradatic war against Rome.

Battle of Amnias: Scythed chariots were first put to use against the Roman ally King Nicomedes and his Bithynian army during the Roman Bithynian invasion of Pontus in 89 BC.   Nicomedes met the Pontics at  Amnias, where Appian relates that the Pontic scythed chariots were "driven at high speed into the the Bithynian ranks. Some men were sliced into two within an eyeblink, others were practically shredded. The army of Nicomedes saw men in two halves, yet still alive and breathing, others sliced to pieces, their mangled organs still hanging from the scythes.  They had by no means lost the battle, yet the sight was so hideous that they were overcome with confusion and fear disordered their ranks."  The Bithynian army broke and the subsequent rout and slaughter continued unabated until nightfall.  By then, half of their forces were dead and the survivors had surrendered.

Battle of Chaeronea:  Here the Pontic army faced the crack Roman commander Cornelius Sulla and his 5 veteran legions.  Sulla maneuvered the Pontics into crowded and uneven ground in a mountainous region.  Pro-Roman Greeks showed the Romans a hidden path that led to a position high above the Pontic  encampment. From there, Romans rained down stones on the encampment, forcing the Pontics out into the plains in disorder.  In the ensuing chaos, the Pontic commander launched 60 scythed chariots at the approaching legions, hoping to replay the shock charge that routed Nicomedes. The chariots trickled out in  disorder and failed to get up to speed in the confined, rocky spaces.  Plutarch reported that the Romans burst out  laughing and simply stepped aside, allowing the chariots to pass between them to no effect. After passing through the legions, the chariots were cut down by javelinmen that Sulla had placed in the rear. The legionaries howled with derision and mocked their enemy by demanding that the next set of chariot racers come out to the race.

Battle of Orchomenos: The Pontic commander gamely put his scythed  chariots on the field of battle one last time.  Frontius recorded that the Pontic attack was drawn up in three lines. The first consisted of the scythed chariots with the goal of disordering the legions.  Close behind them were the Phalangite phalanxes.  Behind them followed the freed Italian slaves armed as auxiliaries.

As the chariots hurled towards the Roman line, the legionaries stepped sideways and backwards to reveal rows and rows of stakes driven into the ground at sharp angles to impale horses and drivers. After the lead chariots crashed to their doom, Roman javelinmen rushed up to harry the chariots which had avoided the stakes by turning around. In panic and disorder, these chariots crashed into the Pontic  phalanx in the 2nd line and further disaster ensued.  It must have been a hellish scene. 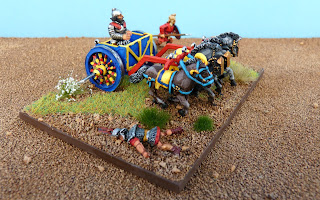 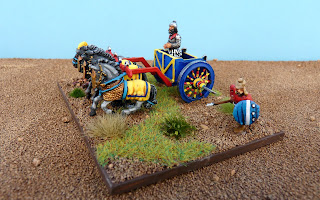 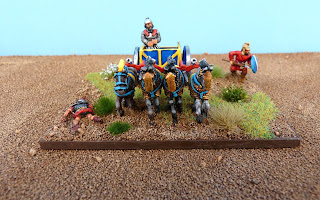 In Impetus, the Scythed Chariot is an Impetuous unit, meaning that once it's activated near the enemy, it goes out of control and starts moving towards the nearest enemy unit.  That rule plays history just right.  Also, it gets +5 Impetus dice in melee.  If the Scythed Chariot fails to eliminate the enemy after its first turn of melee, the Chariot is eliminated.

I considered putting 2 chariots on this base but as you can see, between the wicked scythed blades and the 4 horse team, there wasn't room for 2 chariots.  Great model by Xyston.
Posted by Monty at 7:40 PM