Who were the Bastarnae?  For me, that was a good question as I hadn't seen them at our club and I didn't recognize this troop type on the Pontic army list.   I did a little reading to figure it out for myself.  Understand that while some of you have been reading ancient history for 10, 20 or more years, I'm relatively new to this field on account of spending my life reading up on the American Civil War, Napoleonics and WW II, especially the East Front.

The Greek historian Appian thought the Bastarnae were a Thracian tribe but the current line of thinking is  they were a Germanic people.  A little more reading taught me that they were one of the tribes that made up the Dacians, who themselves were a part of the Thracians.   Appian described the Bastarnae as the bravest of Mithridates allies.  He makes a brief mention of them regarding a sortie but after that, I can't find a specific account of them in the Pontic campaigns.  Because the Bastarnae didn't utilize the written word, what we know of them is limited to other historians and the gaps in our knowledge are filled via speculation and argumentation.  There is a line of thought which says they fought in skullcap, loose pants and no shirt.  A second line of thought says this is all wrong! They appear to have been renown falxmen but another line of thought is that they weren't falxmen at all or that only nobles had falxs due to the difficulty of smithing such a large curved blade.

Into this gap springs the ancient hobbyist's imagination. Xyston makes beautiful rhomphaia armed figures so I used them as Bastarnae.  I chose to kit them in colorful clothes in the Gallic tradition.  In Impetus, these fellows are Impetuous and get 5 extra Impetus dice in melee, basically doubling their effectiveness when they go in fresh. 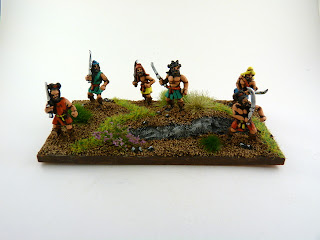 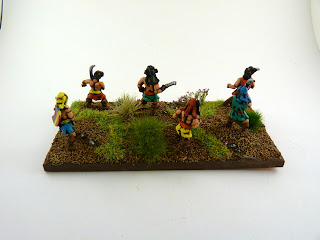 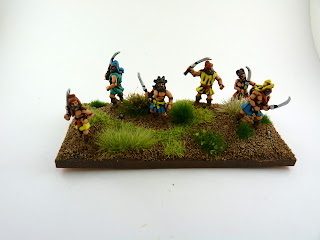 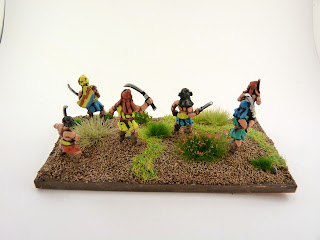 Lastly is a relief from the Tropaeum Traiani that gives a nice visual of the Roman vs. Faxlman showdown.  This one shows an imbecilic falxman who allowed a legionnaire to walk up and stick him in the ribs.  I'm hoping my Bastarnae do just a bit better against the Romans! 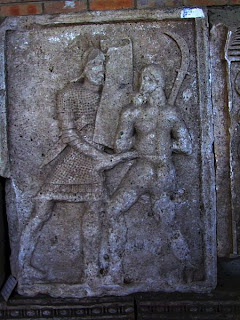