Last year, I took the plunge into painting and playing WW II with Chain of Command and Bolt Action. I enjoyed both rules enough to start a Warlord Games Soviet army. Assembling 60+ plastic figures was a tedious experience that reminded me I'm a painter and not an assembler.  Right after finishing these, Black Tree Design had a 50% off sale on Soviets, making the cost of their metal figures nearly the same as the plastics. D'Oh!  At that price, I bought enough BTD metals to paint up a 2nd Soviet army.

I was looking for shortcuts to get a large Soviet army on the table quickly and after a few tests, I settled on the following:
1. Prime with Plastic Soldier Company's Russian Tank primer (dark green).
2. Block paint in everything but the uniforms
3. Heavy wash with Army Painter Strong tone.
4. Highlights over the top including the uniforms and skin with 2 highlights.  Fast but effective, it got the job done quickly. 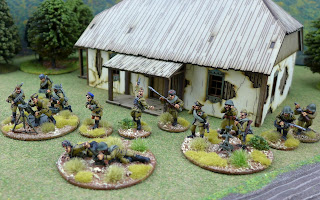 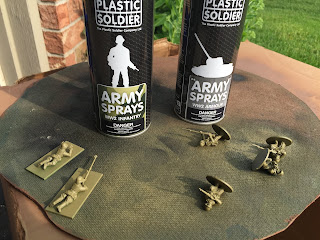 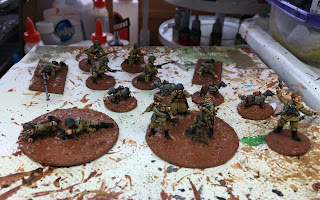 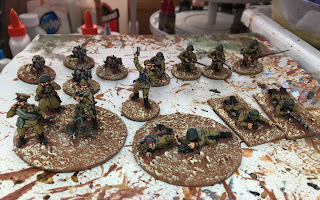 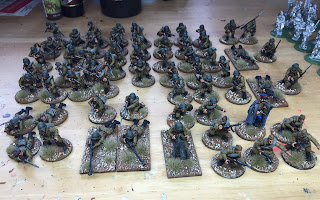 Tank riders and some odds and ends figures. 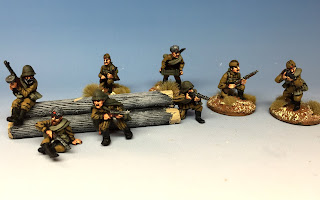 The ZiS-3 looked too boring so I subsequently brought in some railroad ties piled up as cover. 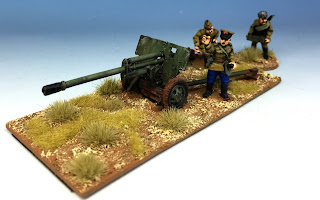 I was reading about Soviet composer Shostakovitch and his 7th Symphony, composed during the siege of Leningrad. Shosty's story is riveting. After experiencing early success, he was nearly swept up in the purges. It all started when Stalin left one of his performances early.  From there, Pravda denounced his work and other artists were forced to criticize him. Shosty slept on his porch so his family wouldn't see him hauled away in the middle of the night. The war and the 7th Symphony turned things around for him. The symphony was played in Leningrad under the worst of conditions. It remains one of the most famous performances in the history of classical music.


Since I was doing a Leningrad-themed army, I decided my objective marker would be shout out to Shosty and his Leningrad Symphony.  The piano is by 4Ground.  The cobblestone is roughly done greenstuff.  I used a copy of the 1st page of the 7th Symphony and a picture of Shosty himself.  He's a dead ringer for Harry Potter to boot!
I previously discussed my 2 highlights and a wash technique for painting the Soviet Naval infantry. On the tabletop, I mix the helmet and cap fellows and deploy them as two squads. 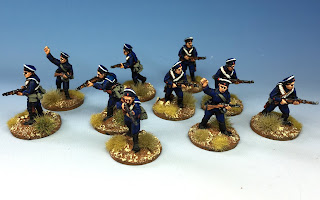 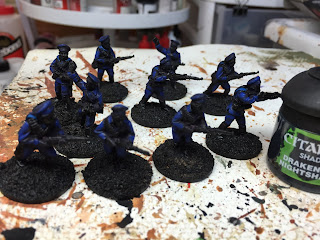 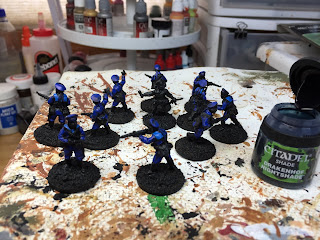 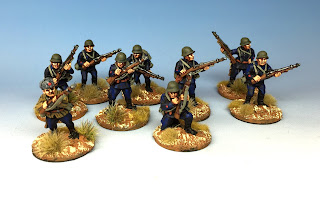 Last up is a Warlord Games limited edition female sniper.  I searched high and low for this figure until Rick Davis donated the figure to my army for free.  Thanks Rick! 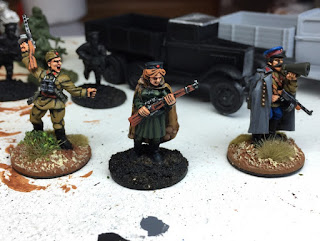 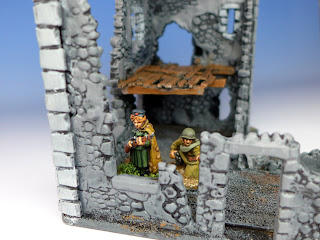 So how does my Soviet force do on the field of battle?  Well, let's just say I run them about as proficiently as the early war Soviet officers.

Note:  Google + comments  disappeared off my blog this AM for no apparent reason. Troubleshooting this for hours in HTML, I managed to destroy  my blog .  I reinstalled an old template but I've lost my links to everyone's blog.  I've turned on the in blog comments and I'll rebuild my links to all of my fellow bloggers sites in the future.  So sorry!  I'm so tired of this nonsense.  Having a 5 year old blog has caught up with me with lots of crap and errors under the hood.